Dicranella heteromalla is a common moss typically, though not exclusively, found growing on bare mineral soil.  It frequently grows in somewhat shaded areas that have been recently disturbed such as along forest margins, on soil covering the roots of fallen trees, on tree stumps and in sheltered areas such as cliff crevices.  It is widely distributed in the Americas, ranging as far south as Colombia, occurring at low to high altitudes. 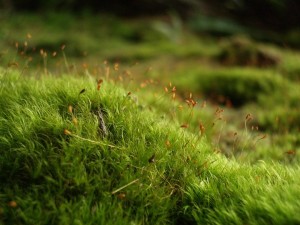 Dicranella heteromalla is a dioicous species that forms short turfs. Plants are light to dark green, usually with a silky sheen.

The leaves are linear-lanceolate: broadest at the base and tapered gradually into a narrow subula. They are variously erect to falcate-secund. Small teeth are usually present along the upper margins. A single, strong costa extends into the apex and sometimes beyond.

The sporophytes of this species are usually abundant and tend to mature in spring and summer. 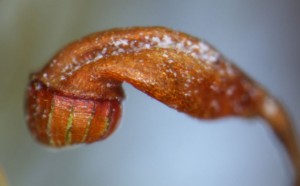 The sporangium is elliptic and asymmetric with a tapered neck and is variously horizontal, suberect, or inclined. It is occasionally furrowed when dry. 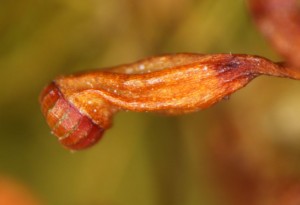 Peristome teeth are bright red, a character which is diagnostic for this species. 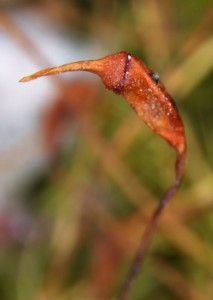 The operculum is long and obliquely rostrate.

The seta, which ranges from 5-15 mm in height, is yellowish when young, becoming brownish and twisted at maturity.

The relatively short, silky-green turfs consisting of shoots with subulate, falcate-secund leaves coupled with reddish, elliptic, often grooved, horizontal to sub-erect sporangia and shady, often bare mineral soil habitat are good cues for recognizing this species in the field.  In the absence of sporophytes, however, this species could be mistaken for a number of others, such as Ditrichum spp. (especially D. heteromallum).  In such cases, closer examination using more technical microscopic characters would be advised.