Tortula muralis is most commonly found growing in urban areas on concrete, but can also be seen growing on bark (uncommonly), on stones and on sandstone cliffs. 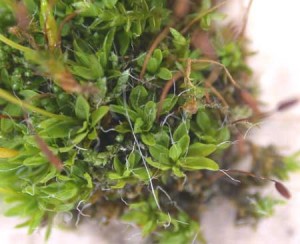 Tortula muralis has an acrocarpous growth habit, meaning the sporophyte is terminal on the main shoot apex. Clusters of Tortula muralis leaves have a whitish cast due to the awns on the end of leaves. 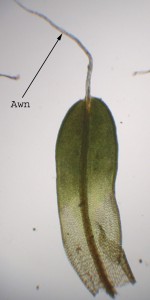 The leaf margin and costa are visibly differentiated from the lamina. The costa extends past the blade of the leaf to form a hairpoint or awn. The hairpoint resembles a long white hair at the apex of the leaf. 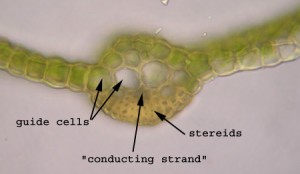 The multistratose leaf costa contains a central conducting strand, surrounded with guide cells and thick-walled stereids. There are no hydroids present in the leaves of Tortula muralis. 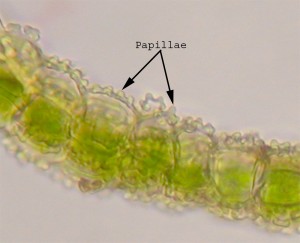 A closer view of the lamina in cross-section reveals that the laminal cells are papillose.

The protonemal stage is uniseriate, with transverse or oblique crosswalls depending on the level of maturation. Protonema contain chloroplasts, which is characteristically different from rhizoids. 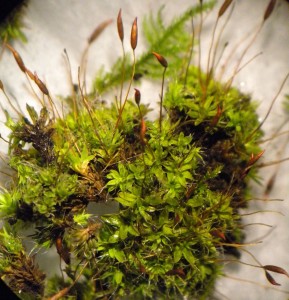 Sporophytes commonly mature in the spring and are red-brown at maturity. The setae are relatively tall compared to the gametophytes from which they emerge. 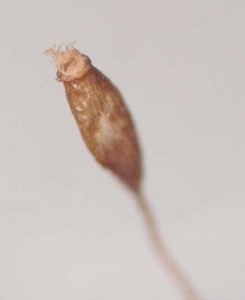 The sporangia are erect and cylindric shaped. The peristome teeth are composed of twisted filaments and are red in color. 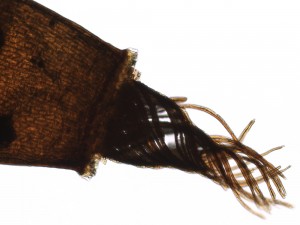 The peristome teeth are fused at the base and move hygroscopically, aiding with the dispersal of spores.

In common with other mosses, stomata are present at the base of the sporangium in this species. 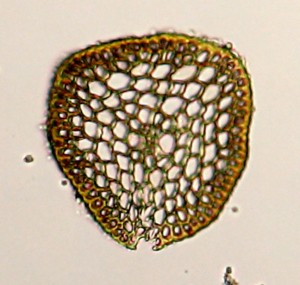 Along with Grimmia pulvinata, this is one of the most common and abundant acrocarpous mosses found growing on concrete surfaces in urban areas of Southwestern British Columbia.