Syntrichia latifolia, formerly known as Tortula latifolia, frequently grows on trunks of trees but can be seen just as often growing on concrete, such as on walls and sidewalk curbs.  In North America, it is distributed along the Pacific Coast from British Columbia south to California.

Plants occur as scattered tufts but are often in local abundance.  Young plants or new shoots are typically yellow-green, tending to become darker with age. 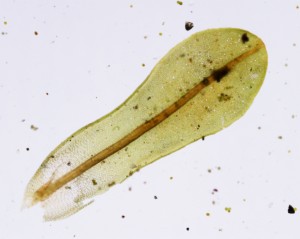 The leaves of Syntrichia latifolia are obovate to spatulate, with broad, obtuse, and usually rounded apices.  The costa ends just below the apex or is less commonly excurrent as a short mucro. 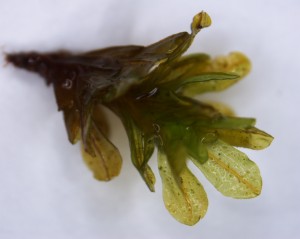 When moist, the leaves are lax and spreading; when dry, they are twisted and contorted. 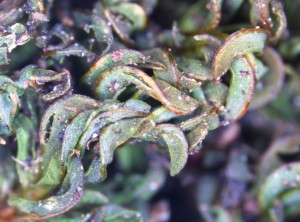 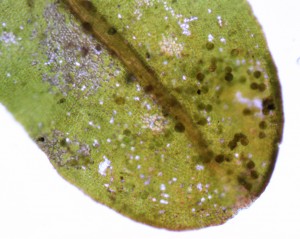 Abundant spherical, multicellular, green or brown gemmae are produced on the upper surfaces of the leaves.

left: close-up of gemmae on the leaf surface 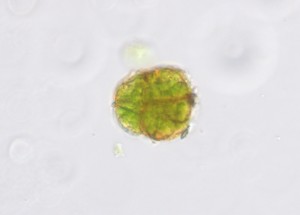 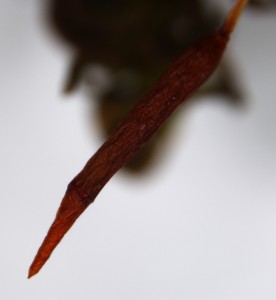 The sporangium is erect, cylindrical, and straight or slightly curved. The peristome teeth consist of long, twisted filaments and are often papillose.

Setae are reddish and range in length from about 5-15 mm.

The spores are slightly papillose.

This species is a fairly common denizen of street-side tree trunks and concrete surfaces in Vancouver.  It can easily be distinguished from other corticolous or concrete-dwelling Syntrichia species in the area by its obovate to spatulate leaves which consistently lack hairpoints. Syntrichia papillosa, which is very rare in Vancouver, also has spherical gemmae on its upper leaf surfaces but its leaves have short, though distinct hairpoints.