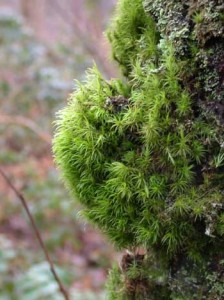 Dicranum scoparium can commonly be found growing in sunny sites on rotten logs, exposed cliff edges, forest floors, and as an epiphyte.  In this photo, Dicranum scoparium is living epiphytically on a tree trunk. 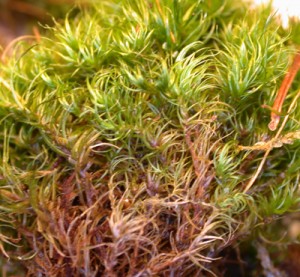 Dicranum scoparium is acrocarpous, forming loose to dense, tall turfs of unbranched or irregularly branched plants. Shoots are commonly glossy-green in appearance. In exposed areas, brittle shoots are a probable source of propagation. 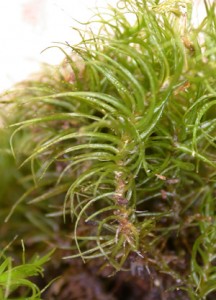 The leaves are falcate-secund.  The term falcate refers to the curve of a leaf.  While the term secund refers to the orientation of the leaves pointing in the same direction on the shoot. Individual leaves are lanceolate-shaped. 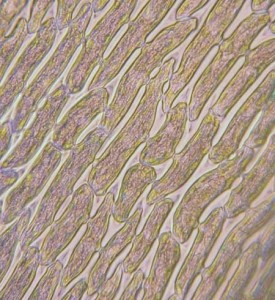 Leaf tips contain elongate cells.  The thinner regions between adjacent cells, where the cells appear to buldge out, are known as pits. 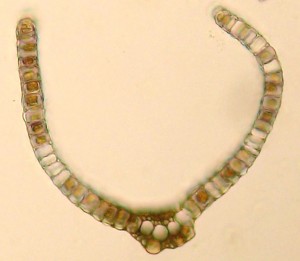 A cross-section of the leaf reveals the lamina is unistratose, while the costa is multistratose.

The base of the leaf contains an alar region.  The alar region is defined by cells on the outer corner regions of the leaf base, these cells may be differently pigmented. 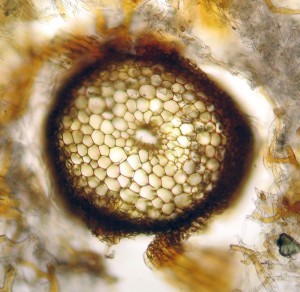 The cells composing the stem are characteristic of the phylum.  The central conducting strand is surrounded by parenchymal cells. Surrounding the parenchymal cells is an outer dark red-brown epidermal ring. 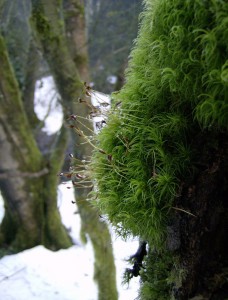 Sporophytes are frequently found at various times of the year. However, maturation of sporophytes is common in the spring. 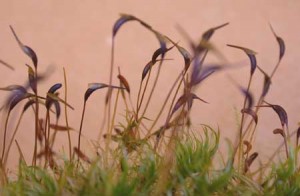 There is a single sporophyte per shoot. 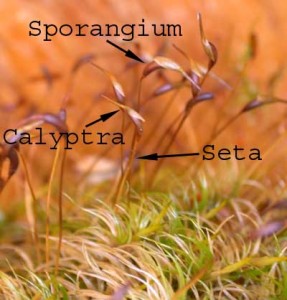 The sporophytic generation has three main divisions known as the foot, seta and sporangium. The foot can not be seen in this photo as it is the region of nutrient transfer from gametophyte to sporophyte, so it is embedded in the gametophyte. The calyptra is the sleeve protective female tissue covering the sporangium. The sporangium are generally hook-shaped. 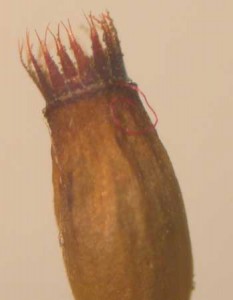 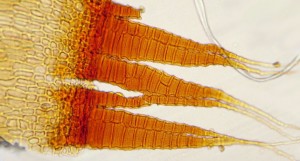 This moss has only one row of peristome teeth shown here.  Each tooth is split (forked) for about a third of its length.  They are haplolepideous meaning that when viewing from the outside of the tooth it looks like it is made from one series of cells.  When using a compound microscope, like in this preparation, you have to know which surface you are looking at and focus up and down to interpret. 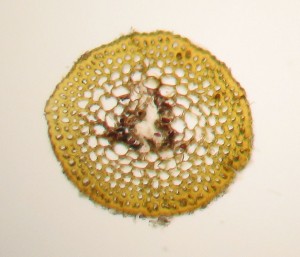 The seta is composed of a central conducting strand, parenchymal cells and a thick outer layer of cells.