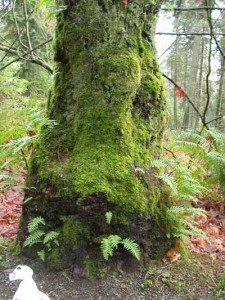 Claopodium crispifolium can be found growing on a variety of substrata including rocks, logs, tree trunks (especially Acer macrophylum) and occasionally soil and concrete, usually in shady sites at low-elevations. 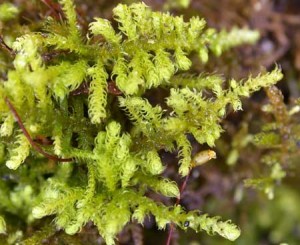 Claopodium crispifolium forms moderately dense, dull, yellow-green mats over the substratum. Branching is pinnate, with branches occurring in a single plane. Apart from the lack of any hint of gloss, another useful field character for recognizing this species is the chartreuse tint of the branch and shoot tips which often contrasts strikingly with the darker, older proximal portions of the plants. These characters help serve to set this species apart from most other pleurocarpous species, such as Isothecium spp. or Kindbergia spp. with which is commonly occurs.

Leaves are spirally arranged on lateral branches, and become very contorted when dry. 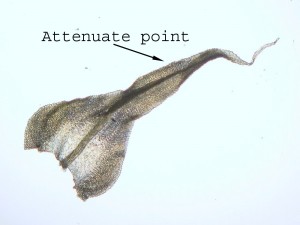 The leaves are more or less ovate-lanceolate in outline: broadest just above the base and tapering to a long-attenuated apex. In contrast to the lamina, the multistratose costa is composed of elongate, pellucid cells. It is also excurrent in a hairpoint. 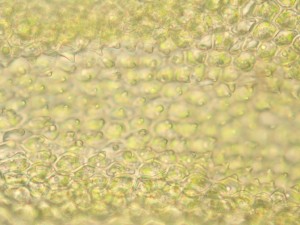 The laminal cells are unipapillose (i.e. one papilla per cell). This papillose nature of the leaves is what gives Claopodium crispifolium its macroscopically dull appearance. 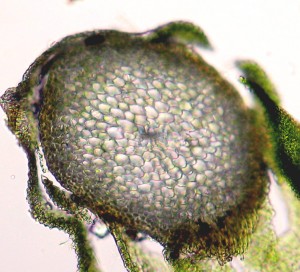 The stem has a wide cortex surrounding a central conducting strand composed of hydroids. 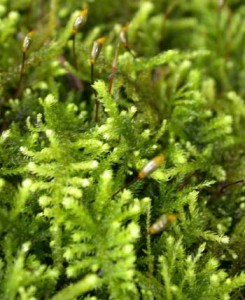 Sporophytes commonly mature in the early spring, however can be found in the winter season. 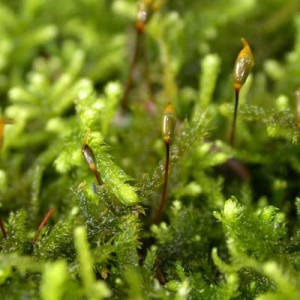 When mature, sporangia are red-brown and dull with a long-snouted (rostrate) operculum. The sporophytes in this photo are not fully mature. 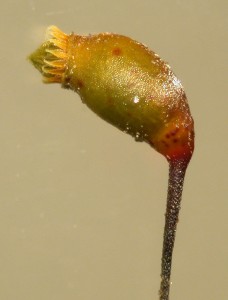 This picture shows mature sporangium that has lost its operculum, revealing the both the  endostome (inner) and exostome (outer) teeth. Note the stomatal cells at the base of the sporangium (evident as red dots) as well as the rough seta. 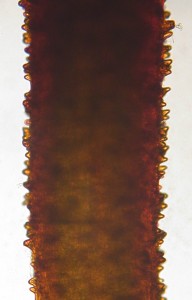 The mature seta are red-brown and papillose.