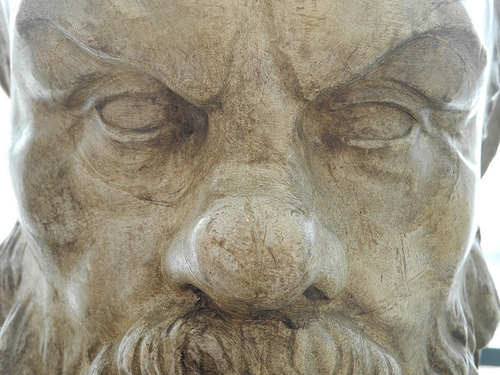 In my previous post I talked about the notion of “rhizomatic learning” and how it might be implemented in a philosophy course. Here I bring up a worry and a question, things that came up for me after I thought about this idea further.

I worry that rhizomatic learning, at least as I described it in the previous post, might promote learning within already-established interests, beliefs, values, etc. What I mean is, if one were to let students create their own PLN’s and focus only on things they are interested in, it may be less likely that they’ll stretch the boundaries of what they already believe and value, and the assumptions underlying their views will go unquestioned. One of the many roles that instructors can have is to goad students into investigating and questioning their own beliefs, values and assumptions–as we philosophers might put it, to act as Socratic gadflies.

In my own connected, networked learning experiences I have tended to focus on those people who agree with me, on sites that talk about things I’m already interested in, etc. If I am pursuing what is most meaningful to me in my current state of being, as rhizomatic learning suggests, then I am missing things that might be meaningful in the sense of jarring me, showing problems with my assumptions, and perhaps also pointing out that the way I am speaking and acting might be contributing to exclusion or oppression of others.

This kind of problem could occur with any practice that focuses wholly or mostly on getting students to pursue their own learning paths according to their own interests. If we only ask them to look into what seems most interesting, what they’re excited about, they might miss out on exposure to things that they aren’t interested in but that can really be valuable for them in terms of thinking critically about their own views.

Two things came to my attention this week that really brought this concern out for me.

First, I received this post from the Tomorrow’s Professor email list (the link to the post is to a blog that’s hard to read because there are no paragraph breaks; it’s easier to read once it’s at the Tomorrow’s Professor site, but it’s not there yet. Soon it should be: search for post 1225). It’s from a book by Mark Tennant called The Learning Self: Understanding the Potential for Transformation (Jossey-Bass, 2012). In this excerpt, Tennant talks about different ways of conceiving of autonomy and what it means to promote autonomy for students in teaching and learning. I won’t summarize the whole thing here, but just look at a couple of parts of it.

In the first part of the post, Tennant discusses the “humanistic” version of learner autonomy, which (he claims) underlies “learner-centred” educational practices inspired by Carl Rogers, among others. Tennant quotes Pratt and Nesbit (2000) on the topic of learner-centred education:

This was an important discursive shift….Now content, and the specification of what was to be learned, was subordinate to the learner’s experience and participation….Learners were to be involved in specifying what would be learned, how it would be learned, and what would be an appropriate indication of learning….The learner’s experience, as a form of foundational knowledge, replaced the teacher’s expertise as the primary compass that guided learning. As a consequence, the primary role of teacher shifted from teacher-as-authority to teacher-as-facilitator (p. 120).

In the learner-centred view, the instructor is a neutral, nonjudgmental facilitator.

In the last part of the excerpt, on “critical” autonomy, Tennant notes that those who adhere to the “critical theory” view of teaching (e.g., Stephen Brookfield and Jack Mezirow),

… don’t accept at face value the beliefs and values of learners—quite the contrary, the whole point of education is, they believe, to challenge accepted beliefs and values. …. In the critical theory approach the teacher is anything but neutral, always challenging learners’ assumptions within a framework that recognizes the power of social forces to shape needs, wants, and desires.

Much of the point with critical theory is not just to question assumptions and how one has been socialized, but to do so in order to combat inequality and oppression–it can often be the case that the dominant discourses in which one is raised and feels comfortable, that shape one’s assumptions and beliefs, perpetuate oppression in subtle ways that are not obvious unless pointed out.

The second thing I came across this week was a blog post by @Edu_K, which raised the issue of rhizomes easily becoming “weeds” in the sense of taking over gardens:

Bamboo and other rhizomatic plants are great at spread, survival and colonisation of new territories. But as ecologists and gardeners know, if unchecked they become weeds and can dominate and suppress a plant community or a garden instead of enriching it. They are also clones – the rhizomes produce exact copies of the ‘mother’ plant.

So instead of free exploration and exchange of ideas leading to rich and unpredictable learning – the story of rhizomatic learning can equally be a story of domination and monoculture, with rarer and more delicate ‘flowers’ getting pushed out, suppressed – not able to grow.

To me, this sounded like what can happen in face-to-face courses, where ideas that are shared by many end up becoming dominant, either because those who disagree aren’t comfortable speaking up because they may feel they are alone, or because of the power of popular views to seem right and gain more and more adherents–creating clones. Similar things can, of course, happen in larger groups of connected persons.

I suppose this concern with rhizomatic learning could be mitigated through ensuring that one’s networks have people in them who act as gadflies, who make good arguments on the “other” sides of what one already thinks, who point one to new resources that make one reconsider one’s beliefs–even if only to decide one’s original beliefs are right and reaffirm them. And somehow encouraging ourselves and others to listen to those people, rather than rejecting them out of hand (as happened with many people in their encounters with Socrates, if Plato is to be believed). But if that is hard enough for us to do as instructors (at least it is for me), then it’s likely hard for our students to do as well. And we can’t do it for them.

The more I think about it, it seems that rhizomatic learning is something many people do for much of their lives–at least insofar as we have connections with others, we are often continually learning from them, and forming new connections when we need to learn new things. The technologies of the 21st century have made our capacity for connections grow exponentially, so we are no longer able to connect only with those that we already know, or can be introduced to by those we do know. We can connect much more quickly and easily with potentially thousands of people around the world.

But if it’s the case that many people often learn through connections with others, whether within or outside of educational institutions, then why not think of the courses we teach as just part of the connections students are making in terms of their lives as a whole?  They have connections with their family, friends, people on social media, their fellow students, and also with us as professors. We, and our classes, are another connection in their lives.

Some of those connections, on blogs and Twitter and more, will speak as experts, as authorities, as providing top-down information transfer. Why can’t we do some of that in our courses too, since we do have useful information to share, and still think of their whole learning process as rhizomatic, even if in our particular course the learning is more top-down rather than lateral? This isn’t to say that there might still be areas in which the teaching and learning should, appropriately, be more rhizomatic (though the above concern still holds), but rather to say that maybe all learning is part of a bigger network each person experiences in their lives (or rather, one of a series of continually changing networks, to keep to the rhizome idea).

I’d love to hear your thoughts on my concern and my question(s)! Are there dangers with learner-centred models such that they don’t emphasize enough the important role an instructor could play as gadfly, or the need to seek out gadflies? Is most or all learning already rhizomatic?

In a Google+ conversation, Shuana Niessen said the following about this post: “This Ted talk (http://www.thefilterbubble.com/ted-talk) adds to the problem of learning that caters to our own interests and choices rather than challenging us to move beyond.”

This is a TED talk by Eli Pariser, talking about how search engines and other applications (like Facebook) filter internet content for each one of us differently, based on our activity within them. Obviously, this is for marketing purposes, but the result is that we may think we have access to all kinds of information, views on different sides of issues, etc., and we are finding a path of our own through that. But often our access is very small, actually, filtered already before we even get to it. Thus, it’s hard to do rhizomatic learning well in the current internet environment, because we may not even be able to make the connections or find the information that would help us think more critically.

The filter bubble website and blog has much more information on this. Thanks to Shuana for pointing all this out to me…I had heard of the issue, but didn’t know about Pariser and his work.

etmooc: Rhizomatic learning–a worry and a question / You're the Teacher by Christina Hendricks is licensed under a Creative Commons Attribution 4.0 CC BY