So far in 2013, while on sabbatical, I’ve actively participated in two MOOCs (Massive, Open, Online Courses): the OU course on Open Education, and ETMOOC (Educational Technology and Media MOOC). The latter was one of the best educational and professional development experiences I have ever had. The former…well…was just okay. Not bad, but not transformative like ETMOOC was.

I want to use this blog post to try to figure out why this might have been the case, and in the next one I’ll focus in on one particular difference and discuss it in more depth.

I don’t think it was just the most obvious difference, that the OU course was an “open boundary” course, meaning it was a face-to-face course that invited outside participants as well, and ETMOOC was not–though ultimately, this may have been an important part of why the two differed so much. 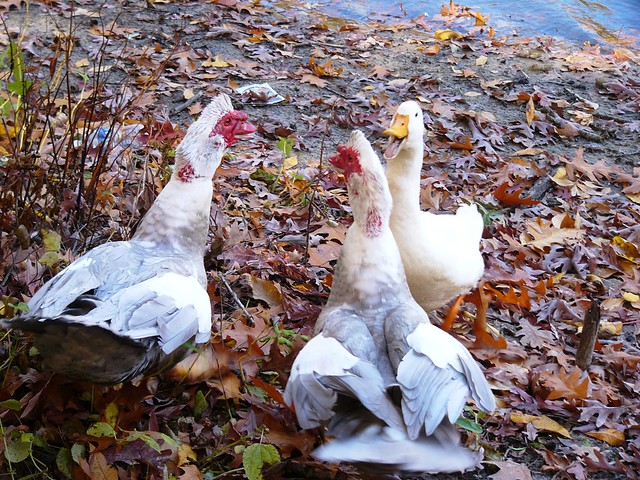 ETMOOC had 1-2 synchronous presentations weekly, some by the “co-conspirators” (the group that planned and facilitated the course), and some by people outside the course. These were mostly held on a platform that allowed interactivity between the presenter and participants, including a whiteboard that participants could write on synchronously, and a backchannel chat that presenters often watched and responded to.

Instead of synchronous presentations, the OU course had assigned readings and/or videos for each week. ETMOOC had no such assigned materials, just the synchronous sessions. These are somewhat similar, though of course the presentations get you a sense of being more connected to the presenter than does reading a static text or video from them. There is at least the chance of asking live questions.

The OU course had one synchronous presentation and two synchronous discussions–the last one a discussion of how the course went & thoughts for the future. I could only attend one of these because of time zone issues, and there was much less interactivity–the chat was much less active, e.g.

ETMOOC had a weekly Twitter chat that was, most weeks, very lively. I met numerous people through these chats that I followed/got followers from, and I still interact with them after the course. The Twitter stream for the #etmooc hashtag was quite busy most of the time, and still has a good number of posts on it. The OU course had no synchronous Twitter chat, and most days saw maybe 2-3 tweets on the #h817open hashtag. Few participants used Twitter, and those that did, didn’t use it very much. Mostly they announced their own blog posts/activities for the course, though some shared some outside resources that were relevant.

Iwent to the OU boards a couple of times, and remembered that I really don’t like discussion boards. I am still not sure why. Partly because they feel closed even if they are available for anyone to view, and partly because I don’t feel like I’m really connecting to people when all I’m getting are their discussion board posts. Unlike Twitter or Google+, I can’t look at their other posts, their other interests and concerns. I stopped looking at the boards after the first week or so.

Fortunately, some of the members of the OU group set up their own Google+ group, so I did most of my discussion on there (and on others’ blogs). There was a small group of active participants on G+ that frequently commented on each others’ blogs, much smaller than the ETMOOC Google + group.

ETMOOC started off with some presentations and discussions on the sorts of activities needed to become a more connected learner (unsurprisingly, as this was a connectivist MOOC), such as introductions to Twitter, to social curation, and to blogging (one of the two blogging sessions stressed the importance of commenting on others’ blogs, how to do it well, etc.)  (see the archive of presentations here). Many of us are still connecting after the course has finished–through a blog reading group, through Twitter and G+, and through collaborative projects we developed later.

OU had no such introduction to things that might help us connect with each other–again, unsurprisingly, as it wasn’t really designed as a cMOOC, it seems. There was a blog hub, and there were suggestions in the weekly emails to read some of the blog posts and comment on them, but it wasn’t emphasized nearly as much as in ETMOOC.

I don’t see myself continuing to connect with any people from the OU course; or maybe I will with just a couple. I didn’t really feel linked to them, even though we read and commented on each others’ blogs a bit. I think the lack of synchronous sessions, including Twitter chats, contributed to this–even in the ETMOOC presentations we talked with each other over the backchannel chat. Of course, things might have been different if I had participated in the online discussion forums in the OU course; but I still think those are not a very good method for connecting with others, for reasons noted above.

The OU course had explicit learning objectives/outcomes for the course as a whole, and for each topic in the course. ETMOOC, by contrast, explicitly did not–see this set of Tweets for a discussion about why. The quick answer is that ETMOOC was designed to be a space in which participants could formulate their own goals and do what they felt necessary to meet them.

ETMOOC had about five topics, each of which ran for two weeks. They were more or less separate in that you didn’t have to have gone through the earlier ones to participate in the later ones. There was an explicit message being given out by the co-conspirators, picked up and resent by participants, that it was perfectly fine to start anytime and drop out whenever one needed/wanted, coming back later if desired. There was no “getting behind” in ETMOOC–that was the message we kept hearing and telling to each other. And after awhile, it worked, at least for me; I missed a few synchronous sessions and didn’t feel pressure to go back and watch them. I just moved on to things I was more interested in.

The OU course seemed more a “course” in the sense of suggesting, implicitly, through its structure, that it was something one should “complete–one should start at the beginning and go through all the sections, in order. Some of the later activities built directly on the earlier ones. Now, clearly, this makes sense in the context of having a set of course objectives that are the same for all–participants can’t meet those if there isn’t a series of things to read/watch/do to get to the point where they can fulfill them.

So, clearly, two very different MOOCs, doing different things, for different purposes. Obviously, for some people in some contexts and for some purposes, each one is going to have upsides and downsides. In the next post I focus on one particular downside, for me, of the OU course (though, as you can tell from my tone in the above list, I found ETMOOC more engaging). I also appreciated the flexibility, which the next post addresses.

MOOCs I have known / You're the Teacher by Christina Hendricks is licensed under a Creative Commons Attribution 4.0 CC BY