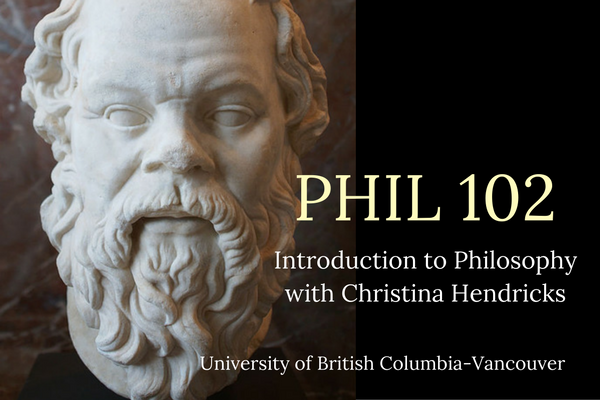 Image from front page of my PHIL 102 course site from Spring 2017. Image of Socrates is Bust of Socrates from the Louvre, by CherryX, licensed CC BY-SA 3.0 on Wikimedia Commons.

I am working on my Introduction to Philosophy course (PHIL 102) again; I’m teaching it next starting in January 2018. But I’ve just been appointed as the Deputy Academic Director of the Centre for Teaching, Learning and Technology at UBC (starting July 1, 2017) and so I’m trying to get as much planning done on this course before the Fall as I can).

I have taught this course many times already and every year I am not fully happy with it and try to make it better. This year was no exception (I taught it from Jan-April 2017). Some of my previous blog posts about this course are here. The post I did in Summer of 2016 on this course I thought was pretty good on overall learning goal planning and reflection, so I’m going to reuse those ideas.

But this post here will be a bit different; I’m going to approach it from the perspective of what I thought didn’t work so well, and see if I can’t come up with new ideas from there.

I’ll start with some common comments on recent student evaluations for the last two times I’ve taught the course (Fall 2015 and Spring 2017).

What could be improved

What students commented on most often in the section where we ask for comments about improving the course is the readings:

There were also somewhat frequent comments on:

For the last two bullet points, I do give a fair bit of information on writing–see here. Still, I think that such things can get overwhelming and don’t really mean that much until one actually starts writing and getting feedback. Then the instructions start to hit home more. Thus the need for more chances to write and rewrite.

Of course, we are limited in our time and TA hours for marking essays, which is a bit of a problem sometimes. I have up to 150 students in this course, and marking and giving feedback on essays takes a great deal of time! Thus the peer feedback exercise, so they get more feedback.

In the part where students give comments about what part(s) of the course taught them the most, the most common answers were:

I have rarely been satisfied with what I do during class time. It’s such a precious few hours in a term and I feel like one should focus on things that it makes sense to do when we’re in a room together, rather than on things that could be done online or in other ways. That means it should be things that require that we work together somehow, not me just standing there talking. Yet, that’s mostly what I do and I’m frustrated with myself for it.

Of course, many, many students think the lectures are what taught them the most (see above), so I’m also torn. Still, I could do the same things with videos, right? I mean, at least with parts of the lectures…the videos wouldn’t be as interactive as the lectures are, since I intersperse the latter (on days when I’ve planned well) with questions on Learning Catalytics or activities on Google Docs or other things.

Me providing many of the answers

This is related to the above; I too often, I think, do for students what I should be asking them to puzzle through in order to learn. I say that philosophy is not about memorizing things about philosophers’ views and I believe it, but sometimes what I do in class operates on that model. I explain the philosophers’ view for them. So what are they supposed to do with that? Memorize it and answer questions on the exam? Well, a bit more than that–they are also supposed to take those ideas and apply them to something else, compare them with other views, come up with questions or possible objections about them, etc. Still, I often operate, during class time, as if my role is to provide content knowledge from the expert perspective and theirs is to take it in.

What’s the problem with this? It’s not always a problem, and sometimes it is very important and valuable to students to “download” knowledge from the professor. But there are some drawbacks, and reasons why this shouldn’t be the only or the main modus operandi:

In relation to students’ concerns noted above with there being a lot of reading, I really want to help students practice doing reading of philosophical arguments (whether in classically “philosophy” texts or elsewhere) and honing their abilities to analyze and criticize those arguments. That’s so important to carry over into other aspects of their lives–there are philosophical arguments everywhere, and being able to parse them and question/criticize them well is an important life skill I believe.

I have thought in the past about spending time on reading and taking effective notes on readings, finding arguments and outlining them, etc. I’ve done the latter in this course but not the former (how to read, how to take notes has been left behind). This time I really want to include that.

I am not happy with any of the themes I’ve used for this course. It’s an introduction to Philosophy course, but it’s focused on “value theory” (roughly: ethics, social & political philosophy, aesthetics…or any one or two of these). It is not required for majors, and most students who take it won’t go on to take any other philosophy course. So the point is not to make sure they get any particular content, but, from how I think of the class, the content should be a vehicle to teach skills like careful reading, analyzing and criticizing arguments, formulating one’s own arguments, writing, respectful discussion, etc.–things that will be useful in their lives more generally.

Of course, some students do go on to take more philosophy courses, and I’m thrilled when they do! So the content is not entirely immaterial. But it should also be engaging for students new to philosophy who may never take another course in the field. And it should have something to do with value theory without just being a repetition of other courses in value theory that may take in their second or third years. (This is the mistake I made when I taught the course the first couple of times…it was basically the second-year moral theory course that I also sometimes teach, only “lighter.” Which, to me, was too much repetition for those who did go on to the moral theory course.)

What do students say they like best in terms of content? Looking just at the last two iterations of the course (3rd and 4th bullet point above), for those that mentioned some content being more interesting or contributing to their learning more, the common responses were:

What I am thinking right now is that the course should have some “applied” topics (a few students said they liked those better than the more theoretical discussions), and that everything should fit together into a somewhat coherent whole (some students got a bit frustrated in the Spring 2017 course about this, and I did too).

What to be sure to do for next time

I’m out of time and so finishing this off even though there are probably other things I could add to the section on what I think should be improved. So I’ll end with a few notes to myself.

More to come on all this…I’ll be doing planning of this course in the open as I often do!

What needs improvement in Intro to Philosophy / You're the Teacher by Christina Hendricks is licensed under a Creative Commons Attribution 4.0 CC BY