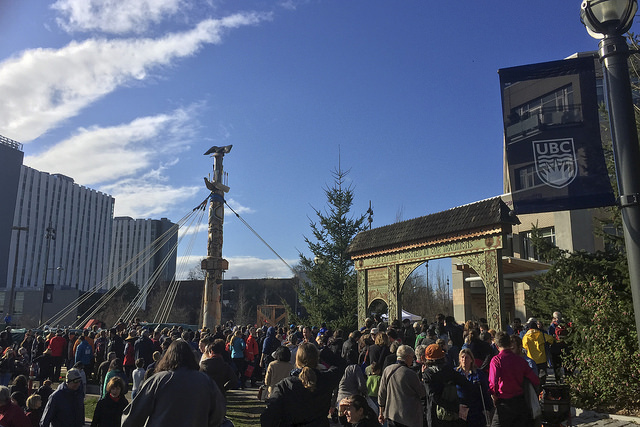 In the video linked above, Dion talks about how when teachers would sometimes ask her to come into their classrooms to speak to students they would say things like: “I don’t know anything about Aboriginal people” because “I didn’t grow up near a reserve” or “I don’t have any Aboriginal friends” (quotes from the video). Sometimes people who speak as if Aboriginal issues have nothing to do with them. She describes this kind of mindset as being one of a “perfect stranger”:

And yet, people who claim to be perfect strangers do have relationships with Aboriginal peoples and issues, even if those relationships are buried somewhat under the surface. Dion describes in the video an exercise she sometimes uses to help people uncover their own biographies of their connections to Indigenous people and issues. She lays out a number of images of Aboriginal people and asks people to choose one and write a reflection on their connection to that image. It’s a small way of beginning to uncover the relationship.

I found an article from 2007 by Dion entitled “Disrupting Molded Images: Identities, responsibilities and relationships–teachers and Indigenous subject material” (see citation below), in which she discusses further her methods of disrupting the perfect stranger mindset. She describes engaging pre-service and in-service teachers in a kind of critical pedagogy through bringing their own memories together with the works they are encountering in class by Aboriginal people:

I engage the students in a sustained conversation with contemporary texts created by Aboriginal artists, scholars, storytellers, and visual artists, while simultaneously asking that they begin to think about and to tell stories about their experiences with and memories of Aboriginal people. Students work at remembering and begin to hold their own experiences up against what they are engaging with in class. (Dion, 2007)

Specifically, Dion describes a course activity in which non-Aboriginal students put together a “file of (un)certainties”: cultural artifacts “that are reflective of their relationship with Aboriginal people or Aboriginal knowledge.” Then, they juxtapose each one with work by one of the Aboriginal scholars, artists, or storytellers from the course.

As Dion notes, this can surface how their relationship with Aboriginal people and knowledges has been shaped by dominant public and scholarly discourses, media, art, and more. She refers to the 2003 Massey Lecture series by Thomas King, specifically the second lecture entitled “Not the Indian You Had in Mind,” to speak of how this relationship is often coloured by the expectation of what “Indians” are supposed to be like according to such discourses and cultural works. More on this topic below…

Another video assigned for the first week of the Reconciliation Through Indigenous Education MOOC was I’m Not the Indian You Had in Mind, written and directed by Thomas King (more info on the National Screen Institute website, even though the video doesn’t seem to be watchable there). Thomas King is of Cherokee, German and Greek descent (according to the NSI website) and is a novelist and essayist who is also Professor Emeritus in English and Theatre Studies at the University of Guelph.

The script of I’m Not the Indian You Had in Mind is a poem written by King, and he appears in the film along with Ntlakapamux and Irish actor Tara Beagan and Cree actor Lorne Cardinal. Each notes that they are not “the Indian you had in mind,” while describing that “Indian” as past cinematic depictions of Indigenous people roll by on the screen. E.g.,

Instead, each speaks of being that “other Indian,” the one who lives down the street, “the one who runs the local bar/ the CEO, the movie star,” “The doctor, the homeless bum/ the boys who sing around the drum….”

This reminded me of one of the chapters I read recently in King’s book The Inconvenient Indian: A Curious Account of Native People in North America. There, in Chapter 3 (“Too Heavy to Lift”),  King speaks of  “Dead Indians” and “Live Indians” (he also describes “Legal Indians,” which are those with legal status as Indigenous, recognized by the U.S. or Canadian governments, but I’m focused on the first two categories here).

Dead Indians are like “the Indian you had in mind”: “the stereotypes and clichés that North America has conjured up out of experience and out of its collective imaginings and fears” (53). These include “war bonnets, beaded shirts, fringed deerskin dresses…” and the like, which operate as simulacra: things that represent “something that never existed” (54). King explains how one can find Dead Indians not only in tv and film, but also in products (Big Chief Jerky, Winnebago Motor Homes), sports mascots (Cleveland Indians), and tourist vacations and retreats that invite one to uncover their “inner Dead Indian” (58).

Live Indians, on the other hand, are “not the Indian you had in mind”: all the Indigenous people in North America today at any particular period in history or today. Whereas the Dead Indian is a representation of something that never existed, Live Indians are real, everyday people. King describes a visit in the 1970s to an old village at Acoma Pueblo in which a woman complained because she could hear a television: “Real Indians, she told us, didn’t have televisions” (63).

When I watched Not the Indian You Had in Mind right after the video interview with Susan D Dion discussed above, I thought: wow, these two really work together in an interesting way. It wasn’t until I read the article by Dion that references King’s work that I realized this juxtaposition was most likely deliberate on the part of the course authors (why would I think otherwise, really?!).

Before I came to British Columbia I lived most of my life in the United States, and there are times during that period I am pretty sure I would have had the “perfect stranger mindset.” Never mind that where I grew up, the state of Idaho, includes four government recognized tribes in Idaho (“Legal Indians,” in King’s terminology), the Coeur d’Alene, Kootenai, Nez Perce, and Shoshone-Bannock. And, according to Wikipedia at least, there are five reservations in Idaho. There were, I’m assuming, many “Live Indians” around that I just didn’t see through all the “Dead Indians” on tv, in the supermarket, and in the Thanksgiving decorations in my schools.

I remember coming to BC and having my eyes opened to living and working on unceded Indigenous land–at UBC, that of the Musqueam people. I remember thinking this was quite a change from growing up in Idaho and living elsewhere in the U.S.

For the 14 years I’ve been here it’s been a slow journey of learning more about my relationship with Indigenous people and knowledges … too slow, really. For a long time I continued to be somewhat of a stranger, though of course not a perfect one. Continual territory acknowledgements, the 2009 Aboriginal Strategic Plan at UBC, the Truth and Reconciliation Commission, workshops run by the Indigenous Initiatives team at the Centre for Teaching, Learning and Technology, the 2018 UBC Indigenous Strategic Plan: over time I have come to learn and reflect more and more. And these days I’m putting even more effort, such as by taking this UBC EdX course. I still have much to learn.

Not perfect strangers (IndEdu200x) / You're the Teacher by Christina Hendricks is licensed under a Creative Commons Attribution 4.0 CC BY