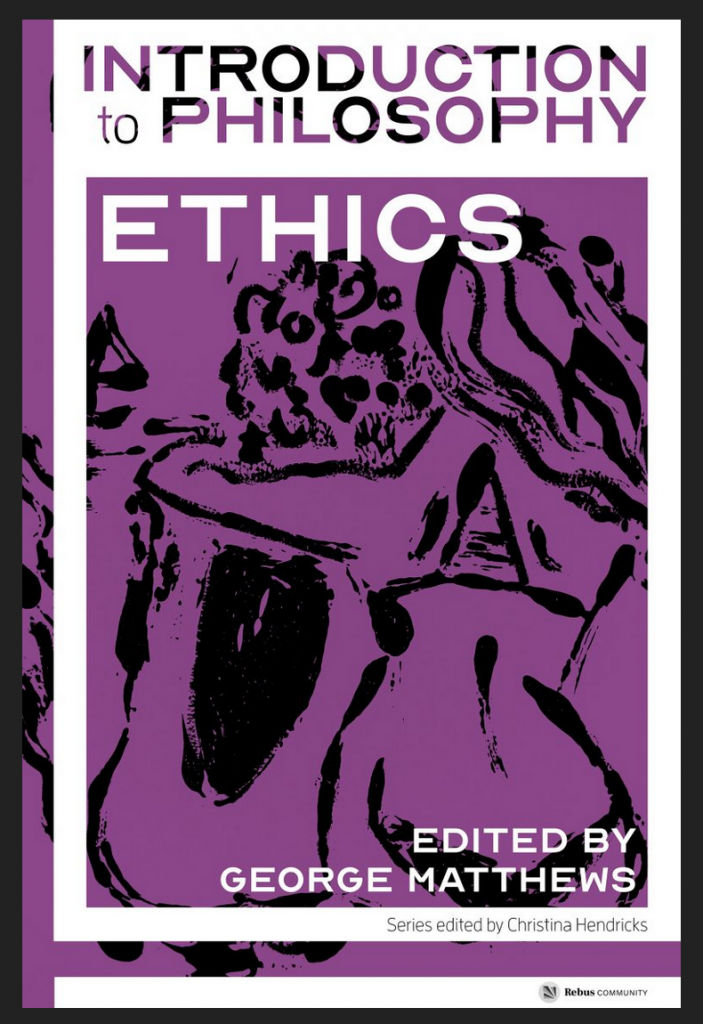 I forgot to announce the second book, Introduction to Philosophy: Ethics, which was published in December 2019. This book was edited by George Matthews, Plymouth State University in New Hampshire, USA. It has chapters on, among other things, ethical relativism, virtue ethics, utilitarianism, Kantianism, feminist ethics.

Here is the book description:

We often make judgments about good and bad, right and wrong. Philosophical ethics is the critical examination of these and other concepts central to how we evaluate our own and each others’ behavior and choices.

This text examines some of the main threads of discussion on these topics that have developed over the last couple of millenia, mostly within the Western cultural tradition. It considers basic questions about moral and ethical judgment: Is there such a thing as something that is really right or really wrong independent of time, place and perspective? What is the relationship between religion and ethics? How can we reconcile self-interest and ethics? Is it ever acceptable to harm one person in order to help others? What do recent discussions in evolutionary biology or have to say about human moral systems? What is the relation between gender and ethics? The authors invite you to participate in their exploration of these and many other questions in philosophical ethics.

And now there are two more books in the series! 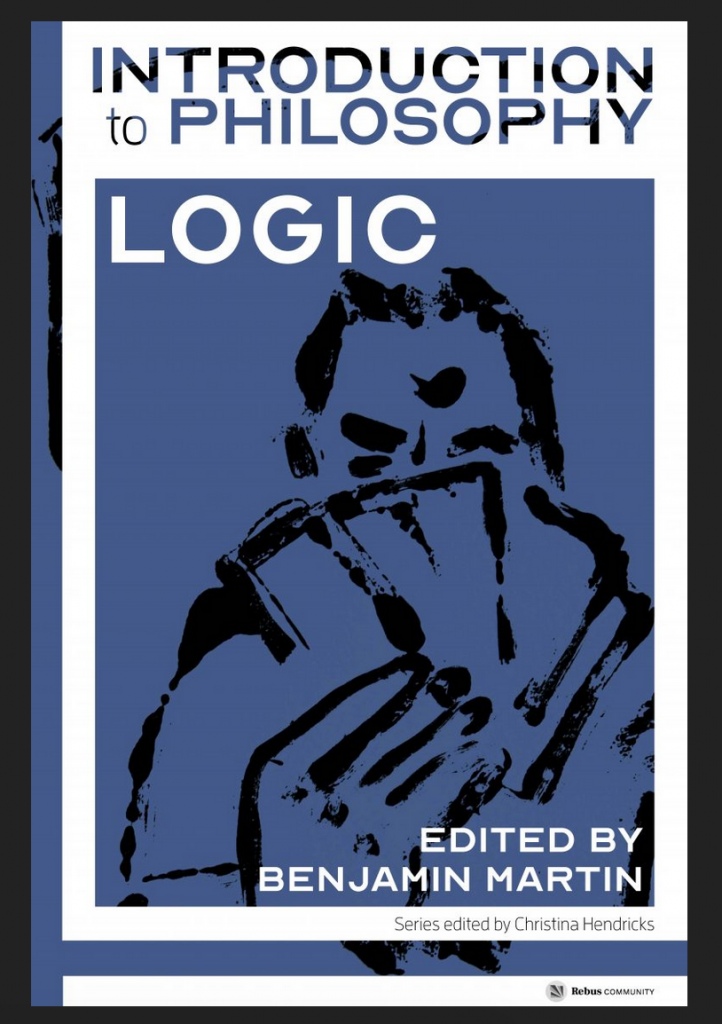 Introduction to Philosophy: Logic was published in November 2020. It is edited by Benjamin Martin, University of Bergen, Norway. This is a short book designed not for a full course in logic, but rather to introduce some basic elements of logic in a course that is focused on introductory-level philosophy. It has chapters on, among others, evaluating arguments, informal fallacies, and formal logic.

The logic book took quite awhile as I learned how to use LaTeX to do symbolic logic characters and formulas in a way that would look decent in the book and also be as accessible as possible (b/c Pressbooks uses MathJax to render LaTeX). I also played around a lot trying to figure out how to get the arguments in standard form to be both as accessible as possible and look okay with a line between the premises and conclusion. I wrote a bit about some of the things I was learning while working on this book in a blog post from January 2020. Things were moving along pretty well in February 2020 and then … COVID-19 and my workload (along with that of many other people at the university) skyrocketed.

I used to work on this book series late at night and on weekends, and suddenly I needed all of that time on my regular job, just have some semblance of being only somewhat behind in my work (never fully caught up). I was utterly exhausted for about 8 months, with little in the way of breaks. Being Academic Director of a Centre for Teaching, Learning & Technology at a university that suddenly turns from a mostly in-person teaching and learning context to mostly online, with all the attendant issues that causes in multiple systems and processes that weren’t designed for this switch, turns out to be huge amount of work. It still is, as it seems each month brings an unexpected challenge. But I am managing to find about 4-5 hours a week to work on this project now at least, which I wasn’t before.

So I’m excited that any book got published at all in 2020, and we managed two! 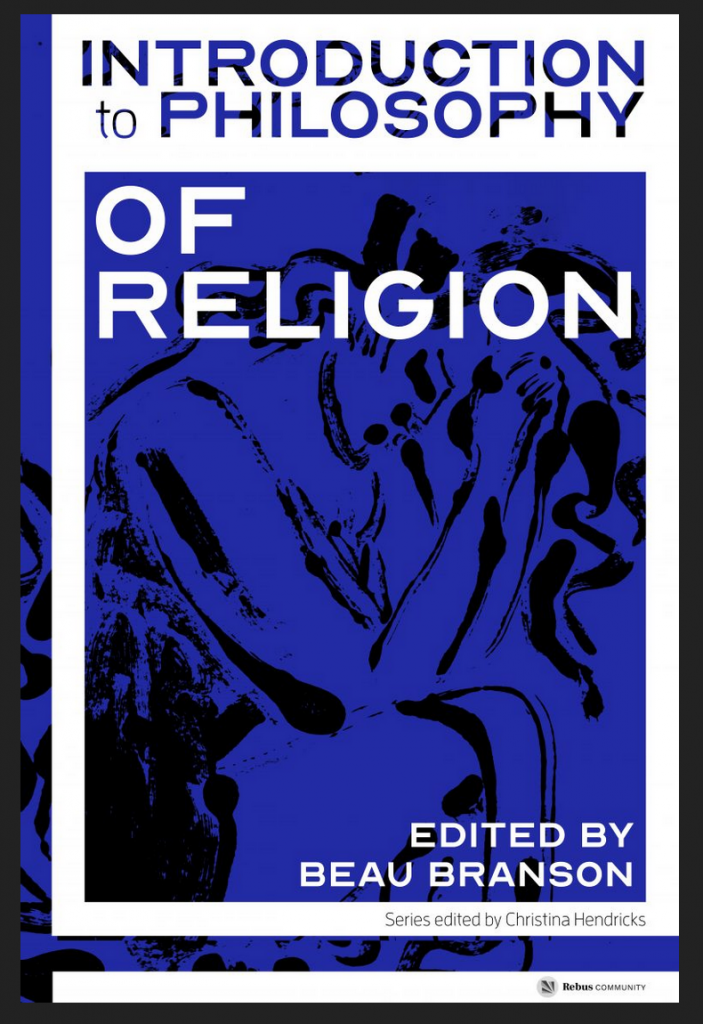 Introduction to Philosophy: Philosophy of Religion was published in December 2020. It is edited by Beau Branson, Brescia University, Kentucky, USA. It is also a concise book, with six chapters focused on arguments for and against the existence of God as well as a concluding chapter questioning the focus on monotheism in current philosophy of religion.

Here is the book description:

Introduction to Philosophy: Philosophy of Religion introduces students to some of the major traditional arguments for and against the existence of God. It also includes discussions of some less well-known, but thought-provoking arguments for the existence of God, and one of the most important new challenges to religious belief from the Cognitive Science of Religion. An introductory chapter traces the deep interconnections between philosophy and religion throughout Western history, and a final chapter considers what place there is for non-Western and non-monotheistic religions within contemporary philosophy of religion.

Whatever your religious beliefs—or lack of beliefs—we think you will find many of the arguments in this book fascinating to think about, and useful starting points for deeper philosophical discussions.

In other news regarding books in this series, the Aesthetics book has gone through peer review and I have recently finished reading the chapters as well, and the Epistemology book has gone through peer review and I am currently reading those chapters as series editor. Metaphysics is next up for peer review, and Philosophy of Science is still seeking authors. Finally, we have a new editor for Social and Political Philosophy, and a new outline of chapters will be announced soon and we’ll be seeking authors for that one too!

Three open textbooks published / You're the Teacher by Christina Hendricks is licensed under a Creative Commons Attribution 4.0 CC BY