Tackling Cancer: Organogels to the Rescue

“Cancer” —  a word that brings fear among the public because ‘incurable’ is what first comes to mind. Drug industries and researchers have spent countless hours to develop a cure against this fatal disease. However, due to rapid advancements in science, what if we are inching closer towards a solution on eliminating cancer? Would that put the public more at ease? To this day, only a handful of cancers are curable such as prostate cancer, thyroid cancer, testicular cancer, and breast cancer. A recently discovered structure called an organogel offers an attractive approach in helping to combat cancer 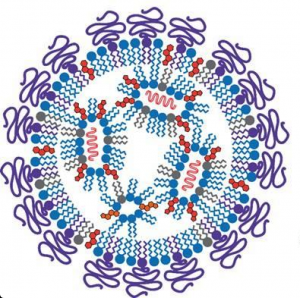 Organogels act as a delivery system that carry drug particles, protect the drug particles, and make their way to cancer cells where it releases the drug contents. Drugs often contain small particles that bind and interfere with proteins made by virus and cancer cells. These particles are called small interfering ribonucleic acid (siRNA). RNA is present in all living cells where it has a role in controlling protein synthesis. Upon binding of siRNA to its target (cancer cells/viruses), the production of harmful proteins from cancer cells in our body will be stopped. Preventing harmful protein production will prevent cancer from forming in our bodies and eventually killing cancer cells. This is the general basis of how pharmaceutical drugs work.

We had the chance to interview Dr. Roy Van der Meel, a postdoctoral research fellow at UBC. In his research, Dr. Van der Meel and his colleagues showed that the use of organogels is very efficient against harmful cells. He found that organogels were able to locate and bind to cancer cells, and successfully release its contents. To learn more about this technique and its impact in the world, view the video below.

What makes organogels so special?

What sets the organogel technique apart from others is that organogels are able to bind to deep tissues within our bodies that are difficult to access. Furthermore, use of organogels contain less severe side effects compared to other methods such as chemotherapy , radiotherapy and surgery. Organogels are biodegradable. This means the body is able to successfully break down the components of the organogel, which minimizes the amount of harm on the body.

Even though this technique has many advantages, there are a few challenges and limitations that accompany it. The small interfering RNA (siRNA)  can be easily damaged by physiological factors in the body which makes it difficult to successfully deliver siRNA to the targeted tissue. Furthermore, injection of organogels is minimally invasive but can have side effects such as short lifetime of siRNA, low renewal efficiency of siRNA, and harming body tissues.

Moving forward into the future

The discoveries and findings in the study provide a basis for the technique of organogels, which still has room to grow. The newly developed technique provides a platform for future research on cancer therapy. Listen to the podcast below to find out more on how this technique can be implemented in the future!

This entry was posted in Biological Sciences and tagged cancer. Bookmark the permalink.