Having difficulties cleaning the kitchen? Does the smell of your fridge annoy you everytime you open it? Don’t worry about them anymore because baking soda has your back.

Baking soda, also known as sodium bicarbonate (NaHCO3), is a non-toxic compound which is safe for daily use. It usually maintains an average pH (a 1-14 scale that measures how strong an acid (< 7) or a base (> 7) is) of 8.1. Since its pH is close to 7, it is considered as a weak base.  There are a variety of applications of baking soda due to its reaction with acids. 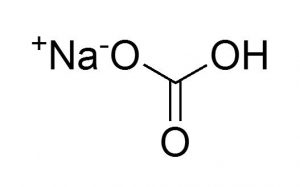 One of the reasons why baking soda creates a huge impact on cleaning is that it reacts with weak acids such as vinegar. The reaction between vinegar and baking soda is an example of the acid-base reaction, which produces carbon dioxide gas. The carbon dioxide gas is produced in the form of bubbles. These bubbles are exactly the same bubbles as those appear in the dishwashing detergents.

Another application of baking soda is due to its ability to deodorize. In a certain environment, bad smells are usually caused by strong acids or bases. Baking soda will neutralize the smell by reacting with these chemicals. If the smell is caused by a base, baking soda can even act as an acid and react with the base. This is why many households put baking soda in their fridges to avoid unpleasant odors. 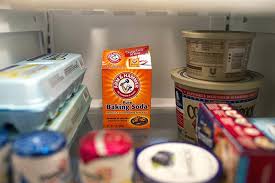 Photo of placing baking soda in a fridge
Source: http://www.youngauthors.info/baking-soda-for-refrigerator/

Baking soda has become more and more widespread throughout the world. Although I have only introduced two applications, baking soda can even be used in many other situations including cooking and medical purposes. In addition, it is not only easy to use and non-toxic, but also very cheap. Thus, baking soda is no doubt the best helper in our daily life.