The Vancouver Observer recently published a commentary co-authored by Sandra Mathison, Stephen Petrina and myself (co-directors of the Institute for Critical Education Studies) on the recent failures of governance at the University of British Columbia.

Read the piece on the Vancouver Observer site, here. 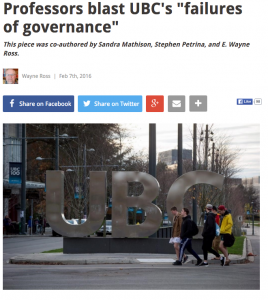 The UBC Faculty Association statement on the recent resignation of UBC president Arvind Gupta describes the situation as “a failure point in the governance of the University.”

In a message to UBC Vancouver faculty, UBC FA President Mark Mac Lean said “we need to understand this failure and the Board must recognize that we cannot move on until we do.”

Gupta’s “sudden and immediate resignation” last Friday and the UBC Board of Governors lack of transparency on the reasons behind Gupta’s departure has produced much skepticism and speculation about the leadership of the university.

Mac Lean was very positive about the new directions of university under Gupta’s leadership, which included budget decisions “designed to move resources into the academic units and to mitigate the impacts that high growth rates of student numbers are having on the entire university.  As a result, significant amounts of money are set to move from non-academic operations to support research and teaching.”

Mac Lean echoed comments made by Prof. Jennifer Berdahl on her blog that Gupta viewed faculty as colleagues and wanted UBC to be a university where “faculty are supported and valued unconditionally.”

He added that “contrary to some of the public speculation since his resignation, [Gupta] had a serious plan well under development to achieve the goals he set for himself and the University, and faculty were at the heart of his plan.”

Let’s hope that the UBC FA, along with others, will be able to pry some answers out a notoriously secretive Board of Governors. The UBC FA’s questions include:

The Board of Governors must explain what transpired to end Professor Gupta’s Presidency after only one year.  What caused this leadership crisis?

Does Professor Gupta’s resignation mean the Board no longer supports realigning the University’s resources to better support the research and teaching missions?

We have in progress searches for a Provost and VP Academic, a Vice President Research, and a Vice President External and Communications.  Those who fill these positions must ultimately hold the confidence of the President they will serve.  What will happen with these searches now?

President Emerita Martha Piper has considerable experience as a past UBC President, but should she hire three key Vice Presidents for the next President of UBC?