Lessons learned during my book tour. Lesson n. 3: Smell your audience and follow through

Smell your audience and speak/read accordingly: This is Lesson n. 3 learned during my book tour across Canada. I must confess I was a bit disappointed with myself at the book launch  in Toronto, which took place on May 16 at the Columbus Events Centre.
In each city of my book tour, I have tried to read different passages, not to repeat myself and, most of all, to understand what readers might better relate to.
In Toronto, though, I got the feeling of having misread my audience. I had chosen for my reading a passage that may have sounded too socio-political. While I was reading it, I felt the audience was not really with me (or was it just my impression?). In retrospect,  I  should have chosen a passage that went directly to the heart, that could stir inner emotions and speak to one’s feelings rather to one’s intellect. I assumed that Toronto, the so-called cultural capital of Canada, would appreciate a more intellectual approach: preconceptions, once again.

Indeed, I smelled the audience but then I did not follow through; instead, I stubbornly went ahead with what I had decided to read. A little flexibility and an extra touch of improvisation would have served me much better on that occasion. 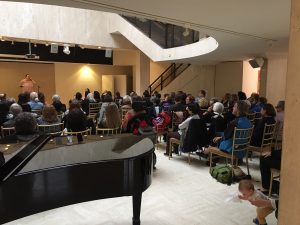 Perhaps I am too harsh on myself, too self-critical. In fact, when I posted these reflections on my FB page, an attendee of the Toronto reading wrote this: “I was at the launch and enjoyed your reading. Given that at least four of the books launched that night are explicitly political, in keeping with Inanna’s mandate (and Guernica’s too), I don’t think it was the socio-political passages. But people may have had reader fatigue. Several of the readers went on overly long, and without a break this was tiring. As an attendee I thought all the books sounded interesting and were well-received.”

Surely a break between readings might have helped. Also, it would have helped if all writers had kept their presentations within the 10-minute time limit, as requested. I wonder, though, if we couldn’t find new, more interactive ways to structure group book launches. For example, I missed the interaction with the audience, the possibility of having a Q&A, or an open discussion on the themes, motifs and issues dealt with in the readings. Some other food for thought!

The main question, however, remains the same: What shall we do with all our acquired lessons once we are at the end of the road?