Never pre-judge your potential readers: this is one of the many lessons I have learned in this 2-week book tour across Canada to launch my novel “The Afrikaner” (Guernica, Toronto, 2019). During the book signing event at Bay Bloor Indigo in Toronto (on May 15) 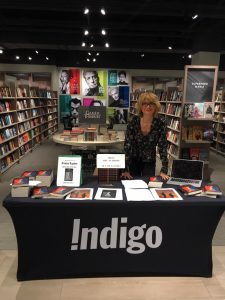 this basic rule of book marketing suddenly stunned me with its simple, delightful truth. For example, I was hesitant to approach young people to talk about my book, assuming they would not be interested in nor able to afford buying books for pleasure (rather than for their studies). The same happened with an old man who wore eye glasses with very thick lenses (he would have difficulties reading…) and with a middle-aged woman in a business suit walking briskly across the lobby (no time, no patience). Once again, I was proven wrong. Among the people who bought the book were: an artist who liked its cover, a couple who had planned a trip to South Africa, a French teacher who had lived for 10 years in West Africa, a lady who had just returned from an Italian holiday (in my hometown!), a Law graduate student, and a fellow writer from Portland, Oregon. At the end of the event I even got a big thumbs up from the Indigo people behind the cash register

🙂 So, thanks again to all of you readers and Indigo shop assistants/managers. Last but not least, a big thanks to the musicians who beautifully played all along on the nearby grand piano. In particular, thanks to piano player Sandra Frieser and red clarinetist Leroy Mark Edwards (see pics hereby + article on his playing in bookstores). This was a real privilege! 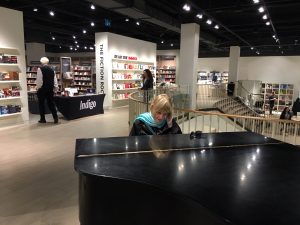 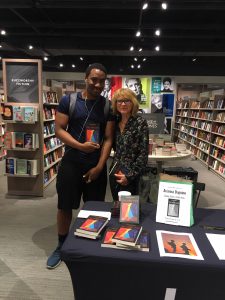