In Arts One this term we are reading Ian Hacking’s book, Rewriting the Soul: Multiple Personality and the Sciences of Memory (Princeton University Press, 1995). Here is a link to the Prezi used by our lecturer for this book, Jill Fellows.

In our seminar class on Wed. Jan. 21 I asked students to write down one or more of the “main points” they got from the text. I did this because there are many things that Hacking is talking about in this book, and I wanted to see if we could pull out a few that we thought were especially important.

In this post I am going to try to put these ideas from students together in some kind of coherent fashion (I hope), adding in my own thoughts on what I think are some of the main arguments in the book. I’ve grouped them into categories; others may group them differently, but this makes sense to me at the moment.

Note: this is a very long post! The first part is what we all said we thought were the main points in the text. If you want to jump down towards the bottom, I try to put this all together into a bigger picture, and then distill it down into an even bigger picture at the very end (literally, with pictures!).

What we said are the main points in the text

The “looping effect” as explained by Hacking:

“People classified in a certain way tend to conform to or grow into the ways that they are described; but they also evolve in their own ways, so that the classifications and descriptions have to be constantly revised” (21).

I think he connects this pretty closely with the idea of “making up people” (6).

The following things said by students fit with these ideas, I believe:

Memory, self-identity, making up ourselves

None of the students said this in what they wrote down, but he makes several points about this idea:

“My chief topic, toward the end of the book, will become the way in which a new science, a purported knowledge of memory, quite self-consciously was create in order to secularize the soul. Science had hitherto been excluded from study of the soul itself. The new sciences of memory came into being in order to conquer that resilient core of Western thought and practice” (5).

“I am preoccupied by attempts to scientize the soul through the study of memory” (6).

The sciences of memory “all emerged as surrogate sciences of the soul, empirical sciences, positive sciences that would provide new kinds of knowledge in terms of which to cure, help, and control the one aspect of human beings that had hitherto been outside science” (209).

Putting this all together

How do these various arguments/emphases fit together? As one student put it when I also asked them for questions they have about the text: “What is this book really about? Multiple personality, the soul, memory?”

Here’s my take on how this might all fit together, but there are, I expect, other legitimate ways to connect it. Under each heading, below, I’ve tried to put in bold and a new colour some of the other categories from above, to show how they could fit with the heading.

1. Memory, the sciences of memory, scientizing the soul, historical contingency

Here’s a picture of what I mean by these two aspects of the looping effect. (Sorry, I only have time to draw this up by hand right now!) 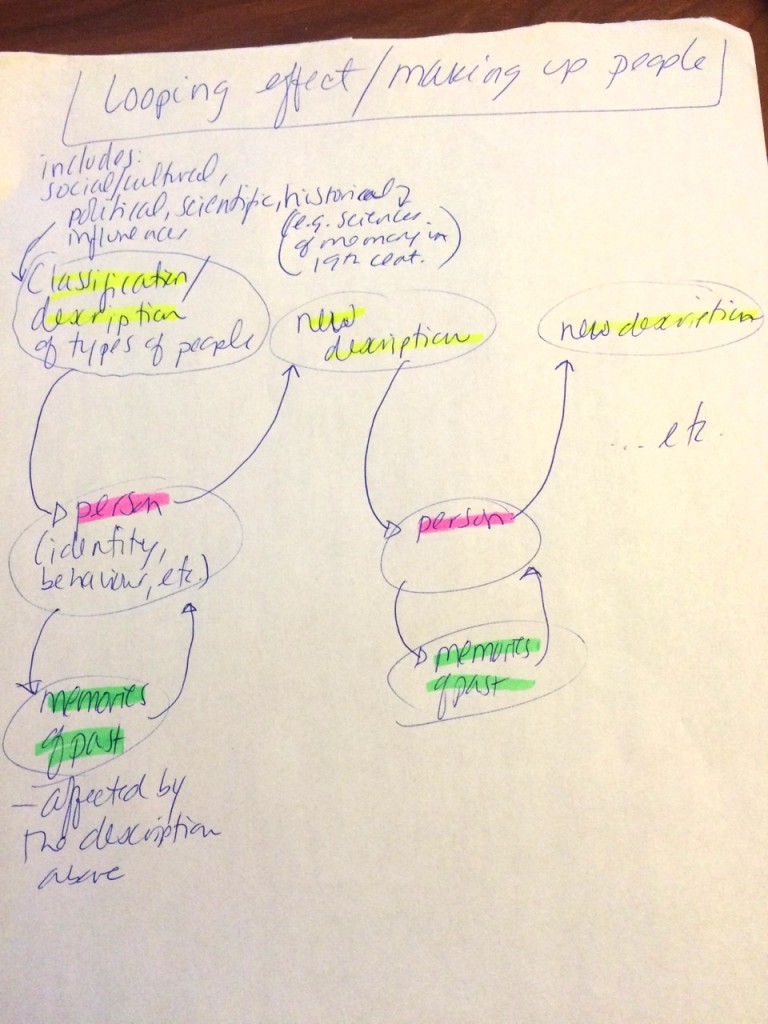 So what is this book about, then?

At this point, after working through all this, I think it’s about memory and identity, how the sciences of memory have developed such that we now see memory as an important part of our identity (that’s the point of the history of those sciences in the middle of the book). This is true for those diagnosed with multiple personality or dissociative identity disorder, but also true for all of us, as we change the past using new descriptions for actions from the past (chpt. 17). Multiple personality is used as a kind of microcosm for the larger phenomenon that we all experience, of how we think of memory as important to who we are, and how the looping effect also affects how we think of ourselves (and note from above, the looping effect also applies to current descriptions of us affecting how we see our past, and thus how we think of our identity. 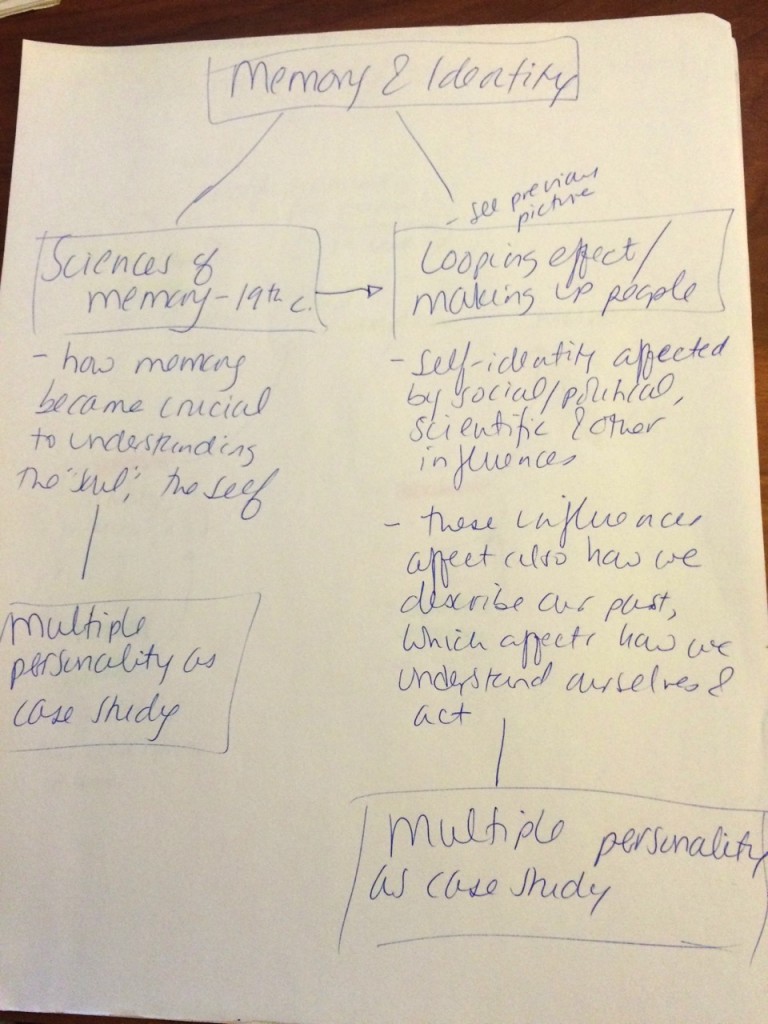 I don’t know if I’ve clarified anything for others, or just made things more complicated. I’ve done what I can in the time I have!

Ian Hacking, Rewriting the Soul / You're the Teacher by Christina Hendricks is licensed under a Creative Commons Attribution 4.0 CC BY