Being the center of attention for beauty, there’s always a disadvantage for women when it comes to appearance. Adding influence from peers and media, it is no surprise for women to get frustrated after a failed diet. However, what really hits home to many is the rumour that men lose weight more quickly than women. Why is it that woman have to try much harder to obtain the same results? Or is that really the case? Many believe that men have an advantage when it comes to losing weight.  There are countless of anecdotes featuring women struggling through a sweaty journey to lose a mere pound or two while men seem to portray this same journey just by cutting out junk food, hitting the gym and watching the weight drop off – a methodology representing simplicity. But what exactly is the real truth? 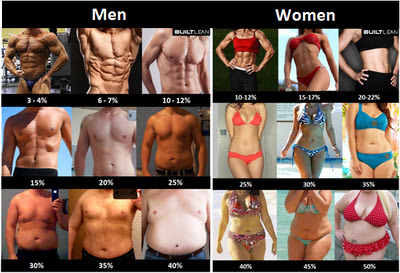 There are two key factors that contribute to the obvious results of short-term weight loss in men: distribution of body fat and muscle content. On average, women have between 6 and 11% more body fat than men. Therefore, despite a smaller calorie intake, women will maintain this higher average body fat content. One thing to keep in mind is that “fat” is not necessarily used in an unhealthy
context. It is true that women have larger fat stores due to their physiology yet this fat does not correlate to extra weight. If a woman contains 4% more fat than a man, it does not mean that she is 4% “fatter”. As for muscle, men tend to have more than women of the same age and weight. Testosterone is the main contributor of this through its effect on body musculature and fat distribution. In addition, the greater number of muscle tissue causes an increase in burning calories even during rest as it is metabolically active.

The media plays with this rumour as weight-loss programs accentuate the difference between men and women. When sedentary men and women start some exercise program, it highlights men losing more weight while women don’t.  In one study, men and women were each put on commercial weight-loss programs such as Atkins, Slim-Fast and WeightWatchers. Initial results showed men losing twice more weight than women and three times as much body fat.  However, when reaching the six month period, the rate of weight loss equilibrated between the genders. Men tend to lose weight where they need it – the belly and so it is more noticeable immediately. Women tend to have their fat stores spread out so immediate results are hard to see.

Overall, the process of shedding those extra pounds is hard work. It is true that men, due to their additional muscle tissue and testosterone portray better initial results when losing weight. However no matter what gender you are, as long as you stay committed to losing weight, the playing field to get to the final result is more or less the same.

Growing up as a child we all had a favourite go-to-toy to play with.  Many girls loved to play with Barbie dolls – the dressing up, fake play dates with other Barbie dolls and role-playing with Barbie’s beau, Ken… who can forget those times? However, as we grew up so did our pastimes with Barbie. But what if some girls actually took the role of a Barbie doll seriously? 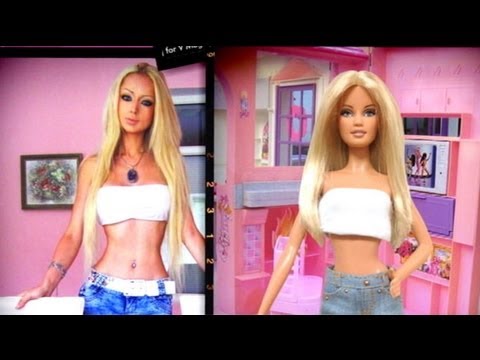 As mentioned in the news coverage, Ukrainian model, Valeria Lukyanova has the ability to transform into a real-life Barbie.  Although it may seem fascinating, Valeria brings about negative feedback and risks to the younger generations.

First, Valeria has emphasized that achieving her doll-like appearance is from the magic of makeup. As we all know, makeup is a necessity for many women. Even with minimal amount, makeup used on a daily basis puts a risk on skin health and increases the risk of cancer.  Articles have shown negative impacts chemicals within cosmetics are doing to the skin and the long-term effects from using them. These small risks may eventually add up as we grow older but as of now, I guess one could say that beauty is pain – there will always be a sacrifice to achieve the perfect image. 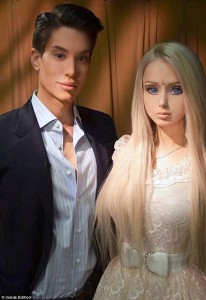 Secondly, although plastic surgery was minimal for Valeria, she did say that she underwent breast augmentation. Her counterpart beau Ken, on the other hand seemed to heavily depend on this.  Justin Jedlica has stated in an interview that for him, it was all about plastic surgery. In either case, the risks of undergoing any type of cosmetic surgery come with consequences as the added chemicals and silicone will eventually take a toll. The worst thing however, is that patients can get addicted and insatiable. This will lead to higher chances for the individual to encounter the consequences.

Lastly, dieting is a major factor contributing to body appearance.  Valeria’s liquid diet and vigorous exercise may have resulted in Barbie doll measurements, but it is far from being healthy-looking. Girls and boys alike are under the pressure to fit into society’s skinny category. From this, many eating disorders arise such as anorexia and bulimia. In addition, the balance between dieting and exercise is abused in adolescents.  The growing bodies of young individuals should consist of a proper diet with enough nutrients and essential vitamins. One should not follow a diet plan of another just because of the result showcased from it.

Overall, setting Barbie as a role model is quite far-fetched.  Despite the constant influence by others and the media, young individuals shouldn’t sway under such provocation. Valeria may have shown her mimicking abilities and found satisfaction for becoming a Barbie; however, girls should just take what they have for granted. It may be smart to start living healthy and tone up the body just for the sake of being healthy; there’s no need to go to extremes by molding oneself into an inanimate object in hopes of bringing it to life.