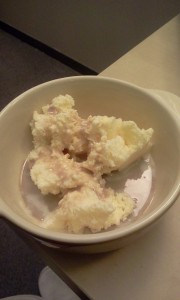 I have finally started my final experiment for my masters.

In order to finish setting up for my experiment, I had to climb the highest mountains, fight the toughest storms, catch a dragon alive and pull all it wisdom teeth out (I am assuming that would be very hard). Anyway, what I am trying to say is that it was a long journey that took over 5 months (I think?) of me sitting in front of the same robot and the same computer doing the same thing (coding, debugging, running, crashing things, and repeating this routine over and over again). Just to give you an idea, I had a conversation about encoder failures yesterday, and I ended up having a nightmare about it. In my dream, the robot’s encoder failed, and was drifty for no reason. And I was sitting on that very desk I’ve been sitting on for the past 5 months, staring at the screen and looking at the encoder drift,confirming that all the data I’ve gathered through my experiment are useless. Yes. It’s a terrible dream to have. But also funny now that I think about it…

Anyways, the experiment setup is not perfect. It could be better – sooo much better. But I had to say “This is good enough” at some point. I had to define where I stop perfecting it.

Well, I don’t want to go on and on about how working on the robot felt like taming a dragon. The important thing is that the experiment has started and it’s now too late to change anything. I must continue on. Continue to collect data.

I was supposed to give myself some pampering sessions the first day I started the experiment. But by the end of the day, I was so tired that I couldn’t do anything but to pass out in my bed.

Tonight, I find myself organizing the initial set of data I’ve collected, and questioning whether the data will support my hypotheses or not. The initial sample size is too small for me to tell anything off of it, but I still have this urge to find out the results now. And with this urge, and a gazillions of things that I need to do before I defend (hopefully in December), I’ve decided to pamper myself with whatever is in my fridge.

Turns out, that most stuff in my fridge is moldy, overdue, or about to be so. Then I remembered my leftover bottle of Baileys and a tub of Creme Brulee ice-cream I had bought fairly recently.

I had this genius idea of pouring a shot (may be a tad bit more) of baileys all over the creme brulee isce-cream. Epic creation. If anyone needs pampering in the sugar/creamy sort of way, to wash away your long journeys of fighting the toughest storms and slaying a dragon and what have you, try it out – I won’t judge you on your sugar and alcohol consumption habits if you don’t. 😉