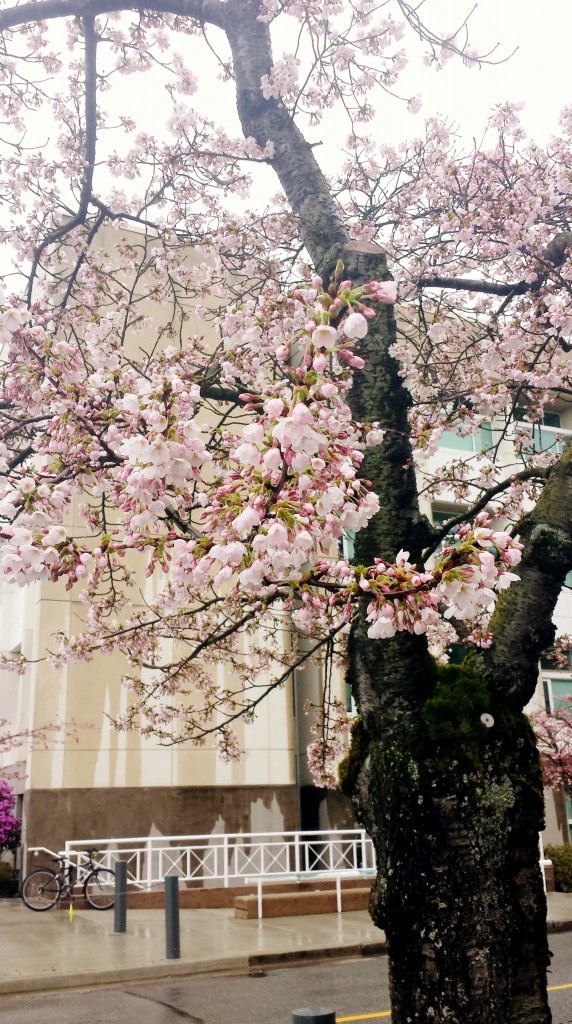 Remember thta picture from only about nine days ago? Yeah, it’s the same tree! 😀

You might’ve noticed that I’ve been posting quite frequently lately. Yeah… I’ve been kind of sort of needing a source of “productive” distraction. I’ve had an amazingly productive last couple of weeks (work wise), and been on my full efficiency mode for a bit too long — and now I’m overwhelmed. lol

Then I remembered that if I learned anything from the dreadful period of the comprehensive exams, it’s that stressing out (to the point of freaking out) doesn’t do you any good, unless you have just the right amount of stress to keep you focused and healthily efficient.

So I decided to go for a run for the first time in a while. Wasn’t it raining this morning? Sure, but it’s Vancouver. Whatever. It ended up being a very refreshing run around the campus followed by the realization that “Hey, I could do this every morning” (I’m kidding. Every other morning seems closer to practical). The weather is warm enough that you won’t be too tempted to go back to bed after stepping out the door. And the campus is going through a very rapid transition between seasons, and bringing that awesome Vancouver spring scenery at its full speed. 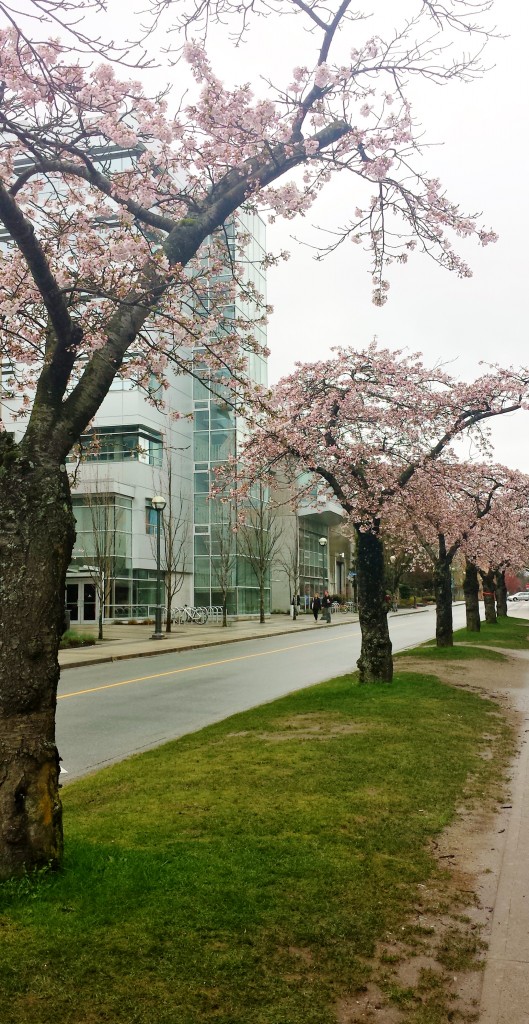 My two minute commute gets so much more pleasant this time of the year. Just makes you want to sit by the window somewhere, and enjoy the view over a good cup of tea. Sigh~

It’s hard to complain about residence prices on campus (yes, they raised it by 2% again this year, yikes!) when you can walk out the door and right away be greeted by an abundance of good jogging routes with fresh and clean air from the trees of the Pacific Spirit Park and the waves of the ocean, far far away from streets filled with the sound of cars passing by. And today, running up and down the main mall (distance: a tad bit shy of 3km from the Thunderbird Cres. to Rose Garden and back) I was greeted by all the cherry blossoms that have bloomed and starting to decorate the streets. Beautiful…!

For those of you stressing out over final projects that are likely to be due in a week or two from now, upcoming final exams, plus catching up with your thesis work, plus paper deadlines, plus a conference to attend in between, plus a couple of side project that you really care about (yeah.. I’m overwhelmed), then why not take a few minutes, put on your running gears, and take a jog around the campus? It might just remind you how awesome it is to be in grad school at such a beautiful university. Well, and chances are, I might just run into you there. 😛 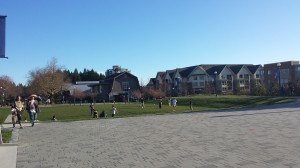 Spring is here at UBC

I woke up this morning feeling bubbly. I knew I had a midterm I had to write later in the day that I wasn’t feeling the most prepared for. But that didn’t really matter because the sun outside the window was clearly telling me that the beautiful Vancouver is getting ready to be epic.

For those of you wondering what the UBC campus looks like right now, here’s a sneak peak of the  Spring-welcoming-excitement that is clearly being shared by the people playing outside, and the cherry blossoms getting ready to bloom. I wouldn’t say it’s the kind of weather to be wearing tank tops yet, but you can definitely get away with a light sweater with a thin jacket. And yes, bring your sunglasses, because I’m sure that makes summer come faster. 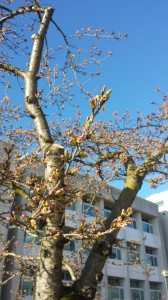 Edit: Oh yes, and while I was out taking pictures, I forgot that all of this excitement is also to say Happy Norooz!

One of the dear readers of iMech asked me to comment on the weather in Vancouver. Hmmp! Let me start with a photo of the campus when it’s sunny and beautiful. Yup, right there. That’s beautiful. You see the ocean, the forest hugging the shoreline and the rest of the campus, and the nicely built buildings cozily tucked in it all. But that’s the summer, and odd parts of the spring in some odd years (such as this and last week — we were sunny all day everyday!! wow!!).

If you want to be one of those people who really learn to wake up in the morning and appreciate the fact that sunshine is coming through your window, then Vancouver is the right place for you.

Hence, any rays of sunshine or even just clearing of the sky really makes people happy and appreciative of the weather. It does rain lots here. It does snow sometimes in the winter (only a few days in a year max).

Because of the long periods of overcast skies, it does get to the point where people feel depressed during the Fall and Winter seasons.

If you want to take a peak at my state of mind during this season, my previous post will probably help. And of course, because the rain and the ever overcast weather can really get to people, there are different ways to remedy it. Mind you, I was way more affected by the rain last year than the year before that when I was attending a conference held in Vancouver and laughing at the number of umbrellas lying around the conference venue in a super cheerful way.

But the campus itself is awesome regardless of the weather I think. Of course, if you’re not the rain and overcast sky kind of person, planning to be in Vancouver for a long time (like doing a PhD) may not be the best for you. But if that’s not a big deal and you don’t mind tackling it as a challenge, then you’ll soon learn that quite a few people jog in the mornings at 6am even when it’s super dark and rainy outside. If you’re not one of them, like myself, and enjoy running in the mild and sunny weather, then UBC campus is amazing for that too — but in the spring/summer times. I went for a run this morning around 6am down the Main Mall, and it was as though the temperature indoors and outdoors didn’t have much of a difference. The newly paved roads on campus also make it really easy for you to plan your runs. Wherever you go, there are green stuff everywhere, or parks and museums you’re bound to pass by during your runs. If you’re more of a run on the beach kind of a person, there’s always the wreck beach on campus that you can run/walk down to. If you feel like switching things up a little bit from your morning beach run, then you are only minutes away from entering the woods.

But I gotta tell you about the summer though.

Contrast to the weather in the Fall/Winter, Vancouver in the Summer is really awesome. Like I mentioned, the abundance of the forests, gardens, parks, beaches, and the mountains make me feel like I am living in some sort of a tourist resort area, although I never end up enjoying all of it as much as I should. And did I mention the sun? Yes! The sun comes out in the summer! It’s never humid/sticky during the summer and the temperature rarely gets uncomfortably hot. Because of the fabulous weather and the surprising lack of bugs, Vancouver summers are definitely more than bearable to enjoy the outdoors while watching the snow capped mountains nearby.

And of course, Vancouver summers are awesome for gardening if you’re into that as well — my blueberry shrub is starting to bloom already, woot woot!!

I hope this solved some of the mysteries of Vancouver weathers for you.

Some people also had questions about using the U-pass, bicycling, or scooter to get to campus, and my answer to that question is you don’t really have an option out of U-Pass unless you qualify as one of the legitimate opt-out cases (check the U-Pass Opt Out form here — may not be up to date). But U-pass in general is useful to have. I live on campus and I use it to go grocery shopping, visit friends, go off campus on weekends etc. Since each ride is $2.75 these days, and people usually ride the bus on their way out and their way in, it will cost you $5.50 per trip. That means, if you plan to go somewhere via the transit more than about five times a month, you’re better off having a U-pass than not — a good deal, no?

U-pass is also definitely cheaper than paying for parking on campus — parking is super expensive on campus in my opinion, not to mention the high gas prices in Vancouver if you’ll be getting a scooter/car here. Biking to campus is not a bad option. A good way to get some of that mandatory daily exercise out of your task list. The campus is quite bike friendly in the sense that lots of buildings have showers you can use if you come biking to the lab stinky and need to wash up and change before you start working. The whole city is bike friendly and has bike paths all around the city. But then again, think about it this way. Are you the kind of person who wouldn’t mind biking in the rain everyday for many many months? I think it’s a valid question.

Anywho, I’m just glad that the weather has been super nice in Vancouver lately. Totally makes it easy to start your day happy and energetic.