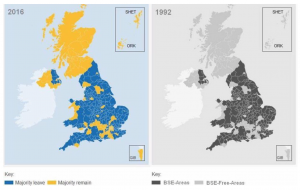 While it might be a stretch to suggest that those who anticipated Leaving the EU consumed great quantities of Mad Cows in 1992, the near perfect correlation is telling.

Coincidence is not correlation. About the same time that the UK was moving towards yes to a referendum to exit the European Union, the WHO’s International Agency for Research on Cancer (IARC) was downgrading coffee and upgrading “hot beverages” as a causal agent in cancer.

As the story goes, expert opinion debunked 400,000 years of the human experience of drinking hot beverages while the Remain camp boasted that expert opinion was on their side.

Leading up to the Brexit, the Conservative Party’s Michael Gove remarked: “I think people in this country have had enough of experts.” Anti-expert sentiment gained momentum and perhaps an upper hand. At the brink of the British exit from the EU and in the aftermath, experts scrambled for legitimacy:

Expertise can breed arrogance and false certainty; specialisms fall prey to group-think. Experts must be challenged and their work robustly interrogated. But that is very different from attacking evidence merely because it undermines your arguments (something that both Remainers and Leavers have done) and instantly impugning the motives of those who have produced it (ditto).

How could experts have got it so wrong? Immediately post-referendum, one pundit asked straight away: “do the experts know anything?” Another queries if we are now witnessing ‘the twilight of the experts.”

Were data saying one thing while experts were hearing another? Intentionally?

Welcome to the summer section of EDUC 500: Research Methodologies!