Halfway through Ernest Hemingway’s For Whom the Bell Tolls, the protagonist Robert Jordan is thinking both forwards and back to Madrid. Forwards because, in the middle of the Spanish Civil War, stuck in a cave behind Fascist lines waiting to begin a tremendously risky and seemingly ill-fated operation to blow up a bridge, he distracts himself by imagining what he will do if and when his mission is successfully concluded. “Three days in Madrid,” he thinks. The capital is under siege, of course, but even so it would offer creature comforts unimaginable on the front lines: a “hot bath [. . .] a couple of drinks.” There would be music and movies: he’d take his peasant lover Maria to see “The Marx Brothers at the Opera” (231). He’d have dinner at Gaylord’s, a hotel that “the Russians had taken over” where “the food was too good for a besieged city” (228).

But all this also leads him to think back (unusually, for a man not given to reminiscence) to other experiences he has had at Gaylord’s, a place of intrigue thick with rumor and “talk too cynical for a war.” It was here that he’d met the shadowy Russian Karkov–introduced by the last dynamiter to work in the zone and described as “the most intelligent man he had ever met” (231). And it was largely Karkov who’d made “Gaylord’s [. . .] the place you needed to complete your education. It was there you learned how it was all really done instead of how it was supposed to be done” (230). For in Jordan’s (and Hemingway’s) jaded eyes, the Republican cause may be right, but it is far from pure. Behind “all the nonsense” (230) is a murky world of machination and deception that only fully comes into focus at the Russian-held hotel. This is the epicenter of disillusion and corruption, but it is also the only place to “find out what was going on in the war” (228).

The hidden reality of the war is not pretty, but in some ways (Jordan reflects) it is “much better than the lies and the legends. Well, some day they would tell the truth to everyone and meanwhile he was glad there was a Gaylord’s for his own learning of it” (230). And Jordan and Karkov talk about when and how this truth will emerge: “out of this will come a book,” Karkov says, “which is very necessary; which will explain many things which it is necessary to know” (244). Jordan himself, a Spanish instructor at a US university, has already written a book–about “what he had discovered about Spain in ten years of travelling in it”–but it “had not been a success.” Some day soon it would be time to try again:


He would write a book when he got through with this. But only about the things he knew, truly and about what he knew. But I will have to be a much better writer than I am now to handle them, he thought. The things he had come to know in this war were not so simple. (248)

Now, Jordan is not Hemingway–and Hemingway is not Jordan, though the author has surely invested plenty in his character, a man of few words who prides himself on his powers of observation and his knowledge of the human psyche. But is this novel the book that Jordan would have wanted to have written? The work of a “much better writer” that is to explain the truth of a complex war whose surface veneer is attractive but whose grim interior is more fascinating still. Perhaps.

But For Whom the Bell Tolls is not really about the war’s covert machination. Indeed, what’s interesting about the novel is that Hemingway refuses to accede completely to Jordan’s notion that the “truth” of the conflict is to be found amid the cynicism and corruption that his protagonist tells us “turned out to be much too true” (228). Or rather, Jordan himself is shown as struggling to determine where the reality of the situation lies. Up in the hills, he knows that the situation is bad, not least when he sees the “mechanized doom” (87) of the Fascist planes that roar overhead and announce, as clearly as anything, that the enemy knows of the forthcoming Republican offensive. But he can’t quite admit this: asked whether he has faith in the Republic he replies “’Yes,’ [. . .] hoping it was true” (91). To admit to the precariousness of their fate, the difficulty of their mission, would be to fall into the trap that has ensnared Pablo, the local guerrilla leader who has let fear (and alcohol) overwhelm him, because he knows that their cause is long lost: he toasts “all the illusioned ones” (214) and explains himself by saying that “an intelligent man is sometimes forced to be drunk to spend his time with fools” (215).

Ultimately, Jordan–and Hemingway–know that Pablo is right. But that cynical truth has to be both acknowledged and at the same time staved off, postponed, in the name of another truth that resides within the illusion itself, the legends and lies. So what we get is an ebb and flow, a tense and agonizing interchange between these two truths, between an apparent simplicity and purity (incarnated above all perhaps in the figure of Jordan’s lover Maria–who can never be taken to Gaylord’s–but equally in Hemingway’s characteristically terse and understated style) and a darker, more cynical complexity that can neither be denied nor allowed to dominate. So the paradoxical result is that simplicity ends up being far more complex than the web of machinations that it endlessly has to deny, precisely because in fending them off it recognizes and so includes them, while the cynic can only destroy all that is pure. It preserves, in other words, the infrapolitical paradox: that what is necessary for politics is never inherent in it, but vanishes with scarce a trace. 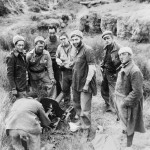