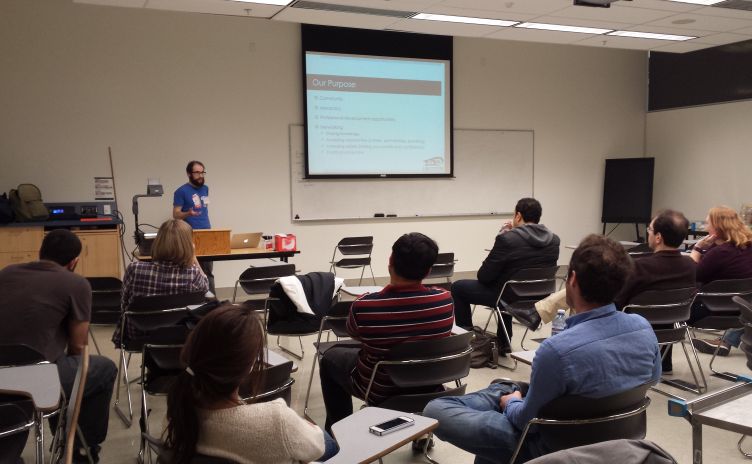 The new UBC Postdoctoral Association’s 2017-2018 Executive Team was elected at the annual general meeting held last Thursday, March 9th at the Life Sciences Institute, following a brief recap of the previous year from each of the outgoing Executive Officers.

Alex Smith, the outgoing president started things off with a brief overview of some of our past events:

He also mentioned some of our advocacy and outreach activities on behalf of the outgoing VP External who couldn’t attend, and some of our previous social activities that occurred under both Justin Hart (VP Social 2016), and Jessica Bosch (VP Social pro tem 2017).

Our outgoing VP Operations, Zoe Riches, gave a quick overview of the role of the VP Operations and described a few of the duties involved, then handed the floor to Jenny Chik, our outgoing VP Communications. Jenny discussed the role of the VP Communications, then described our increased reach with postdocs through increased newsletter subscriptions and a great social media presence. Houra Loghmani-Khouzani then gave a quick overview of the VP Finance position, and the current state of the PDA’s budget.

We then heard from each of the candidates running for officer positions (their statements of interest can be viewed here. All positions except for VP Finance were elected by acclamation.

Following the vote for VP Finance, the new 2017-2018 Executive Officers are:

During this meeting, the PDA also voted unanimously to formalize previously proposed changes to the constitution.

The new team will officially take over from April 1, 2017, with the remainder of March used to facilitate a smooth transition from the outgoing to the new incoming team.

We strongly encourage people to get involved with the PDA! There are lots of great people and fun to be had in planning our events. Contact us to join the executive team!