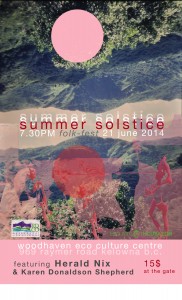 Music in the forest. Metis fiddle and the lake-country blues. On Saturday June 21, thirty or forty people came to celebrate the Solstice with us outside in the Woodhaven circle of trees. Karen Donaldson Shepherd began the evening with singing, fiddle and guitar. Herald Nix sang and played guitar, old blues full of energy and sadness as the sun went down, and the place was transformed. The music was a campfire and we, in our chairs in the grass, orbited around it.

I wanted to mention this (a great piece by the musician and Georgia Straight writer Alexander Varty) in the musicians’ intro that evening but never had a chance; I’ll use it as a substitute for photographs of Herald Nix here.

“One hundred years from now, when the musicologists of the future are attempting to trace the origins of British Columbia’s lake-country blues, there’s one salient moment they’ll be able to point to: the day Herald Nix loaded his battered amplifier, his equally well-worn guitars, and a few dusty suits into the back of his old panel truck and headed east from Vancouver, back to Salmon Arm . . . ”

I’d like to acknowledge and give a big THANK YOU to the musicians, and to everyone who came out to enjoy the show! Thank you to Megan Hunter for running the front gate, and Nancy Holmes for introducing the evening. And Julie Prudhomme, for the evocative event poster. Thank you to Emily MacMillen and Shimshon Obadia for taking pictures of the event (including those you see here). Finally, special thanks to Lorna Skelton who has been so helpful and generous with her time, both in preparing the liquor license and serving drinks at the event.

A review by S. Megan Hunter

This summer solstice evening was
intimate; those that came were drawn
to the calm. Singer-songwriter Karen
Donaldson Shepherd sang songs to us
about the moon, told sweet stories
with her delightful penetrating
laughter. Then ‘The Janet’s’ Amy
Modahl’s man Herald Nix played the
sweetest down home old-timey blues
ya ever did hear. Stripped down, no
effects, just a voice and a guitar as
reminders of simplicity. Perhaps, this
is how life was meant to be.

Gentle artists, such as award-winning
printmaker Laura Widmer and others
seeking solace from a busy world
came. Some said they felt like they
were in on a “secret”. And they were.

This was a most mellow retreat-
honouring the longest days of the year
to usher in the warmth, the light and a
celebration of the Sun’s return.

But thank the Sun God for the wine
bar and the bottle of bug spray being
passed around.