The morphology of the species in the class Sphagnopsida, also known commonly as “Peat moss”, is quite different from that seen in the other classes of the phylum Bryophyta. These morphological differences may explain why this class is the most economically valuable class of mosses. Not only is Sphagnum used in soil to increase water retention and horticulture, but it has also been used to dress wounds to prevent infection caused by microbes. 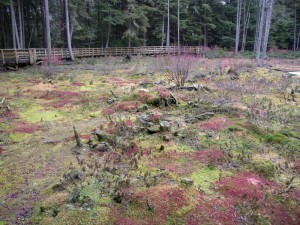 In the class Sphagnopsida, there are two orders; Sphagnales and Ambuchananiales. While Sphagnum dominates cool humid climates, showing the greatest diversity in temperate regions, the order Ambuchananiales is only represented by one endemic species in two localities in Tasmania. 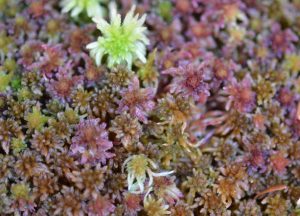 Sphagnum is a truly beautiful and amazing bryophyte. It is the foundation of the bog ecosystem – an engineer of its environment.  You can also find it along slow-moving streams in coniferous forests of Pacific Spirit Park and Stanley Park.

Unlike the filamentous protonema of other mosses, Sphagnum has thalloid protonema with rhizoids.  Rhizoids only occur in the early stages of this plant: 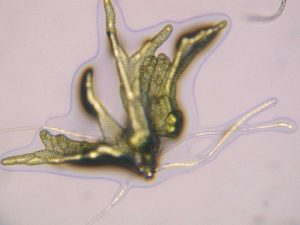 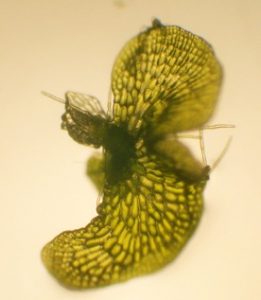 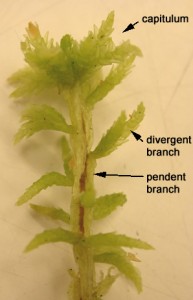 The capitulum, which is a cluster of young developing fascicles, is located at the apex of the main shoot. As the stem continues to elongate, new clusters of branches form at the apex, thus maintaining the capitulum. Furthermore, the protonemal stage of Sphagnum is very brief and filamentous, and is quickly followed by a thalloid stage. The species exhibit rhizoids only when the gametophyte is young.

When looking at Sphagnum, one must remember to observe both the leaves of the stem and those of the branches because the leaf shape and cell arrangement will differ. These observations are extremely important when trying to key Sphagnum species.

The leaves of the class Sphagnopsida are one cell thick (unistratose), arranged spirally and lack costa. Furthermore, the leaf tissue are characterized by being comprised of two cell types; chlorophyllose cells and hyaline (colorless) cells. The chlorophyllose cells, as the name suggests, possess chloroplasts and they form a network pattern in the leaves. The hyaline cells are dead at maturity and have one or more pores, which function to retain water and allows access to the environment. 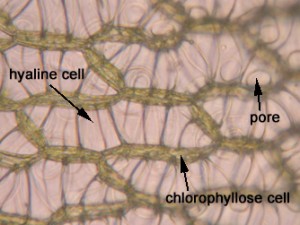 The structure of the hyaline cells is strengthened by fibrils, which are thickenings of the cell walls. The arrangement of the chlorophyllose cells as well as the variations in the pore distribution seen in the hyaline cells provide useful information when classifying species in this class.

A cross section of a branch leaf can  be very useful in identifying a Sphagnum species. When observed carefully, one can see there is variation in how chlorophyllose cells are exposed.

In some species the chlorophyllose cells are completely enclosed, while in others they can either be exposed more broadly on the concave surface (inner/adaxial), the convex surface (outer/abaxial) or equally exposed on both surfaces. 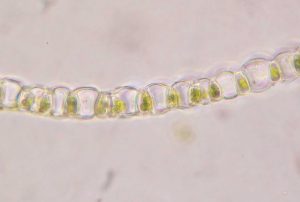 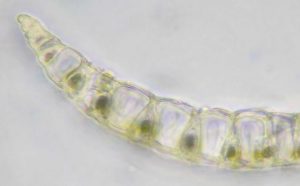 Furthermore, the inner cell walls of the hyaline cells can further aid in the identification. 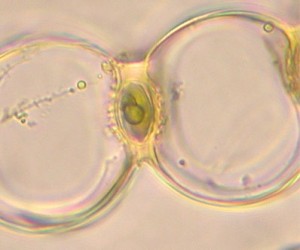 Seen here in this picture is a branch leaf cross section of Sphagnum papillosum, demonstrating the papillae on the cell walls adjacent to the cholorophyllose cells.

Stem (left) and branch (right) leaves of the same plant often look very different as you can see in the image below (stained with crystal violet): 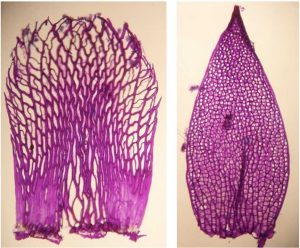 Cross-sections, as illustrated in the image below, of the main stem (left, also just called just stem) and branch stem (right) of the same plant often also look very different: 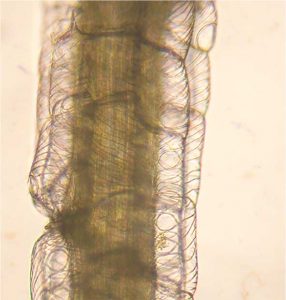 The central part of the stem has a cylinder that is called a “wood”. The outer layer of the stem, also referred to as the cortex, is also composed of hyaline cells, which are called cortical cells. In some species, the hyaline cells may have pores and fibrils present.

Species in the class Sphagnopsida do not have hydroids or leptoids.

The perichaetial branches of the Sphagnum species are initially at the apex of the main stem, where the cluster of branches are found. Per each perichaetium, one can find multiple archegonia, however paraphyses are absent. 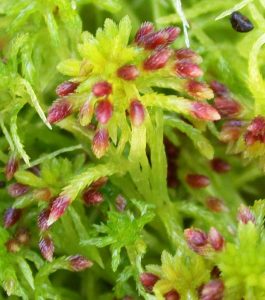 The perigonial/antheridial branches, which are modified divergent branches, can easily be identified because the tips are often tinged red. 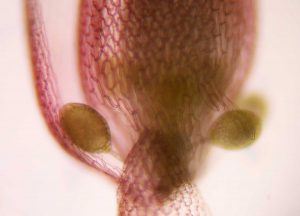 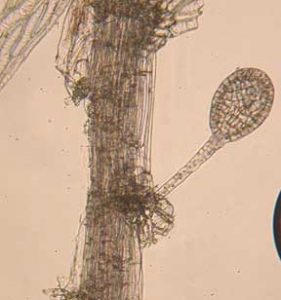 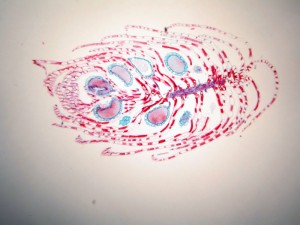 Only one antheridium is found in the axil of each perigonial leaf.  Paraphyses are absent. The antheridia are nearly globose and have a stalk, as seen in this picture.Prepared slide of perigonial/antheridial branch.

The sporangia of Sphagnum are similar to some extent to those seen in Bryopsida and Polytrichopsida in that an operculum is shed prior to spore dispersal. 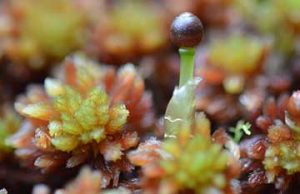 However, unlike these classes, Sphagnum species lack peristome teeth and spores are expelled all at once. Furthermore, the sporangia in Sphagnopsida are elevated by a pseudopodium rather than by a seta. As seen in the liverworts, the stalk do not elongate until the sporangium has reached maturity. The sporangia are round in shape and are often short-lived. 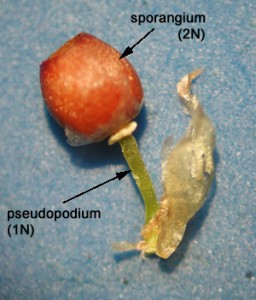 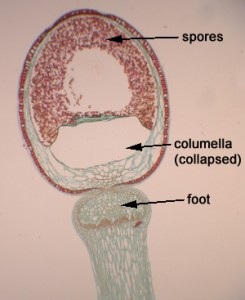 Some species in Sphagnopsida can reproduce asexually via fragmentation; this class does not produce gemmae.

Examples of species that belong to the class Sphagnopsida: