For the second week of ds106zone, the Summer 2013 edition of ds106, we were working in part on design assignments. I had a few ideas of things I wanted to do, but only managed to get one thing done because it took me so long. I decided to take on a difficult assignment, knowingly, because I wanted to force myself to learn about more things in GIMP to do it. That definitely worked–the learning about stuff part. The final product is not quite what I wanted, but it’s pretty close, which I’m happy about.

I thought about doing the “Wait, where’d that guy come from?” assignment, which I thought I could do fairly easily in GIMP, or the “Lyric typography poster,” which would give me a chance to play around with fonts, but decided that what would be most challenging, and therefore would push me most to learn lots of things, is the “I can read movies” book cover assignment. That requires looking at & choosing fonts, as well as adding things into images, and more, so it is a bunch of things I wanted to learn rolled into one. It is also quite difficult to pull off well.

I looked at Spacesick’s original “I can read movies” covers, and most of the ds106 versions on the assignment page, and decided I wanted to go with a black background with a couple of colours. It reminded me of a kind of 60s/early 70s aesthetic that I thought would work for my idea to do a Twilight Zone episode version. 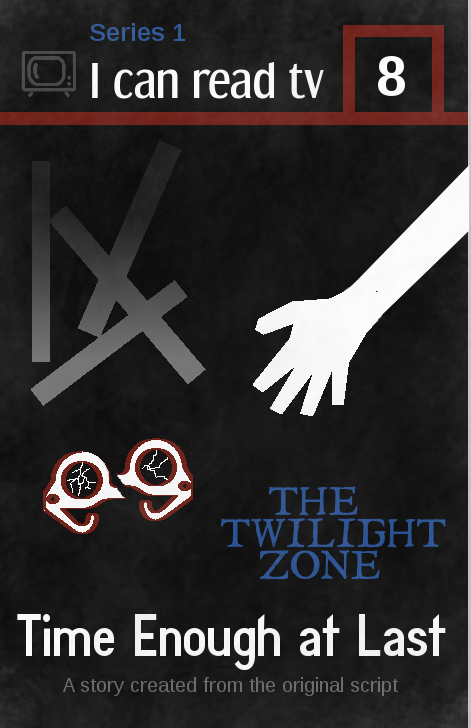 What I was trying to do:

What I’m happy with

What I’m not happy with

There are a number of things I’d like to change, but I just needed to finish this so I could move on to week 3!

Since this was a complicated process, the discussion will be a bit long. As with my post on selective colourization, mostly I’m documenting this in such detail for my own future reference, and for anyone else who is very new to GIMP like me.

Creating the hand and glasses

I got the hand and glasses from The Noun Project site. They were svg (scalable vector graphics) files, as are all the files on that site. I had watched the presentation on design for ds106zone and learned that svg files are useful because they don’t pixelate when scaled. So I thought: hey, great! I’ll put them in my image and scale them up a bit and they’ll look fine.

No. I didn’t watch the presentation carefully enough. Tim Owens and Jim Groom noted that when you import svg files into GIMP they get turned into something else (jpegs, I think), and so when you try to scale them up they DO pixelate. Tim suggested we could import them into GIMP as bigger images (you can choose the pixel size when you open them in GIMP) and scale down, and they’d look okay. Which I did, and they did.

But the problem came when I tried to colour the svg files from The Noun Project. They were black to begin with, and I needed them white. It was when I coloured them that they pixelated. I used the “fuzzy select” tool and then the bucket tool to colour them white, and I got weird pixels. I don’t know any way to fix this except to use an svg editor like Inkscape (thanks to Brian Bennett for suggesting that to me via Twitter). But I just didn’t want to try to figure out a new image editor at this point. So I lived with the pixels.

I drew an arm to attach to the hand with the lasso tool and filled it with with with the bucket tool. I then wanted some kind of colour on the glasses, so I tried colouring them entirely red, but I didn’t like the look. So I used “stroke selection” to do an outline on them, Which was also pixelated b/c they were pixelated. I used the pencil tool, I think, to draw in some “cracks” on the glasses lenses.

To break the glasses in half, I selected one half of them and used “cut” and then “paste” to get a floating layer. Then I created a new layer and anchored the floating layer to it (if I remember correctly). Then I could move that half of the glasses separately from the other half. I know Henry Bemis’ glasses didn’t break in half in the episode, but I did this to emphasize their brokenness.

I drew rectangles with the rectangle select tool, and filled them in with grey. But they were all vertical, and I wanted them rotated a bit. This turned out to be difficult, because when I used the rotate tool I got white where the bars used to be. I didn’t know what to do, so I started trying to paint black over that white part, which was a pain. I can’t remember exactly where the bars were–I think on the background layer, rather than on their own separate layer. I did an extensive web search to solve the problem, and finally found an answer here. I discovered I could put the rectangles on a floating layer and then move them, either using a combination of key strokes or “cut” then “paste” to create a floating selection. I can’t recall if I could rotate them on the floating selection or whether I had to anchor them to a new layer first.

I originally made the rubble just grey (to fit the b/w show, and grey seems a good colour for rubble), but it looked really flat. So I used the “gradient” tool in GIMP to add a darker/lighter gradient–picking the foreground and background colours and making the gradient go from one to the other.

Creating the top of the image

I just used the rectangle select and bucket fill tools to do the red lines at the top. The tv icon was also from The Noun Project, and was also black to begin with. When I used the fuzzy select tool to try to recolour it, the pixelation was really, really bad. It looked awful. So, I used the lasso tool and selected around each part of it and then used the bucket fill to change the colour. I tested a few colours and decided on grey. It took awhile to hand select and colour in the whole icon, so when I was done and didn’t like the colour I couldn’t bring myself to do it again.

At first I tried the following. I first downloaded some new brushes, from the Deviant Art site. I downloaded some texture brushes and some “grunge” brushes. Then I created a new layer and coloured it white, lowering the opacity. Then I used the eraser tool and played around with some of the texture and grunge brushes to erase away parts of the white layer. This looked pretty good, except that there was then no “dust” on the white parts of the image. I realized I needed to add grey “dust” to make the white parts look a little old and worn as well.

So I used some of the texture and grunge brushes and painted on a grey colour. I played around with the colours and the opacity, as well as the brush characteristics, including size, spacing, dynamics, and more. Here is a nice tutorial on brushes that I found very helpful. 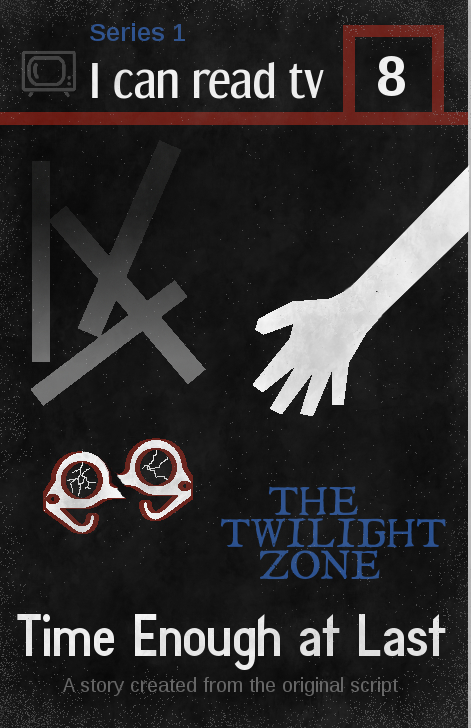 As noted above, I wanted to try to make the book cover look like parts of the paper were flaking off because it was old. I tried to do this with the “dissolve” mode on various brushes, playing with the colour and opacity, and the best I could do is at left and below. I used white at first, but it just looked weird, so I went with grey. It’s okay, but it looks like grey speckles rather than flaking paper.

I tried a few different ways of doing the speckles, with different colours and opacities, and here’s one with brighter speckles. I still don’t think it looks like paper flaking off. Not sure what else I could have done. 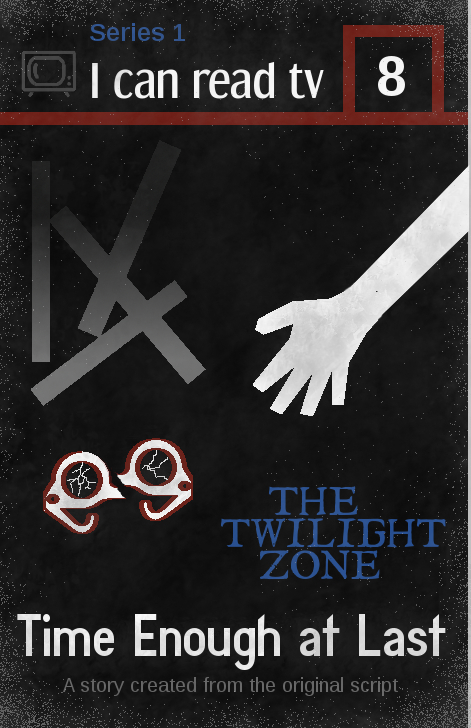 Well, I think that’s it for process. I’m pretty happy with the way it turned out, but it took me a LONG time because I still don’t know that much about GIMP. But doing this project taught me a whole lot of things I didn’t know before, so I’m very happy about that!

“I can read tv” book cover–Time Enough at Last (ds106zone) / You're the Teacher by Christina Hendricks is licensed under a Creative Commons Attribution 4.0 CC BY