Seduction and Spellcraft in an Apocryphal Buddhist Scripture

The important Chinese Buddhist apocryphon “Scripture of the Heroic March” (Lengyan jing) famously begins with the nearly successful seduction of the Buddha’s cousin Ânanda by a courtesan and contains other episodes in which carnality and lust are crucial elements. Another of the most celebrated elements of the apocryphal “Scripture of the Heroic March” is its lengthy spell, which occupies nearly the whole of the seventh fascicle.  While the scripture maintains a consistent emphasis on the conversion of the impure into the pure, its attitudes towards sexual behaviour and spellcraft are less clear cut. In this lecture, I will explore the enduring popularity of the scripture by looking at the appearance of the twin themes of seduction and spellcraft as they weave their way through a complex and highly structured religious text. 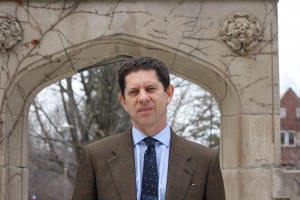 James A. Benn is professor of Buddhism and East Asian religions at McMaster University. He is a historian of medieval Chinese religions and has published on topics such as self-immolation, spontaneous human combustion, and Chinese Buddhist apocrypha. He is the author of Burning for the Buddha: Self-Immolation in Chinese Buddhism (University of Hawai’i Press, 2007) and Tea in China: A Religious and Cultural History (University of Hawai’i Press, 2015).