The author investigated all manuscripts concerning parasols, mainly focusing on “Liturgies for Installing Parasols” 安傘文 from Dunhuang. He argues that parasols served as special ritual instruments for guarding the local community. The sacred power of parasols was based on the apotheosis of their practical function of shielding and protecting and was enhanced by the beliefs and practices associated with the Mother of Buddhas with Great White Canopy 大白傘蓋佛母 in late Tang and Five Dynasties. Installing parasols or carrying them in a procession around the city was equivalent to delimiting a boundary, setting up a defense, and creating a sanctuary.

The Great White Canopy Dhāraṇī is filled with mysterious power, whether it is worn on the body as an exorcising object, placed in the four gates as a symbol of guarding passage, or put into the parasol and paraded around the city as a way of cutting lines through open space. In all these cases, the practice distinguishes between inside and outside, self and other, purity and impurity, and has the power to exterminate plagues and disasters, solemnify the space and obtain blessings, and bring purification, health, and peace to all. Such technologies are indebted to esoteric Buddhism but may also share techniques with traditional Chinese methods (fangshu 方術) and Daoist exorcistic prayer. 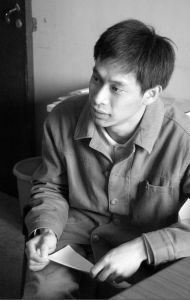 YU Xin (余欣) is a historian of medieval China, specializing in the study of Dunhuang manuscripts and the Tang dynasty. He received his BA (1997) and MA (2000) from Zhejiang University, and Ph. D (2003) in Chinese History from Peking University. He joined Fudan University in 2003 and now is Professor of Medieval Chinese History.

Professor Yu’s research interests lie in natural history, manuscript culture, and the social history of religion. He aims to develop a comprehensive understanding of the role of different source materials (historical records, archaeological evidence, bamboo slips and silk texts, Dunhuang and Turfan manuscripts, lost Chinese books in Japan, and literature on Sino-foreign relations) in the production of knowledge and religious practice, and to re-think the role of manuscripts and images in intellectual history, belief, and daily life. He has published numerous books, including Way of Gods, Life of Humans: Social History of Livelihood Religions in Dunhuang during the Tang and Song Dynasties (2006); Signs of the Extraordinary in Medieval China: Erudition, Belief, and Society in the Age of Manuscripts (2011). He is also the editor of a series of research monographs: Studies of Knowledge, Faith, and Institutions in Medieval China (12 volumes, 2012-2014).