Sydney Dunn Posted in The Glam Fam — No Comments ↓

This week’s assignment was to write three different definitions for a relatively complicated word using three different formats. In doing this exercise we would practice writing to different audiences and develop a greater understanding of the important role of definitions.

The term I selected is “contrapposto” which is very common for describing sculptures in Art History. An applicable context for these definitions would be something like a gallery tour where the guide would be giving additional information about the art to the participants.

Contrapposto describes how a figure balances their weight while standing.

Contrapposto refers to the stance of a figure in sculpture. The figure’s weight is rested on one leg while the other is bent slightly at the knee resulting in a tilt in the hips, shoulders, and head.

The term contrapposto describes the stance of a figure in sculpture where the figures weight is balanced on one leg while the other remains bent. Contrapposto is the Italian word for counterpose suggesting the tilt in the figure’s stance.

It is most commonly recognized in sculptures from the Ancient Greeks who strived for realistic representation of the human form. Contrapposto offers an alternative to previously static and stiff depictions of the human form and instead gives the illusion of movement to the sculpture.

Figure 1 (Polykleitos’ Doryphoros) demonstrates how the hips, shoulders, and head tilt to follow the distribution of the figure’s weight. 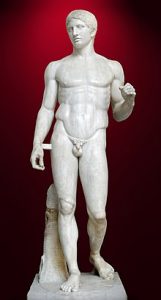