WALTER ONG  (2010) STATES in a very straightforward way that print “encourage the sense of closure” (p. 129). He does it in the context of a book that illustrate his categorical and binary (as Chandler called it) vision of information processing as oral or literate. And print, of course, is part of the literate “dimension”.

Ong himself mentions letterpress and photolithography (p.130), but these are massive print reproduction devices, and I do not think that this “state of completion” (p.129) is exclusive of print mass media. In fact, I think that actually it comes from publication (“The action of making something publicly known” [OED a]) and the growing confidence in technology that seems to develop since the industrial revolution. This same feeling of “closure” might come from a voice recording, as neither publication or technology are exclusive of the print media. Nevertheless, it is easier (almost inevitable) to give this attribution to print from this already mentioned binary vision, given that mass printing media seems irremediably connected to technology since the invention letterpress.

This personal statement can be illustrated with the case of the use and misuse of the diacritics in Spanish since the invention of typewriter machine.

The manual of Spanish orthography of the Spanish Language Royal Academy (Real Academia de la Lengua Española), the maximum authority in the use and knowledge of the Spanish language, in its 4.10 subsection, states: “The uppercase letters must have tittle is its suitable according to the given rules[…] The (Spanish Language Royal) Academy had never established a rule contrary to this”. (RAE, 1999 pp. 31) It is easy to notice that the last part of the written rule is curious, or at least redundant. And there is a reason for that.

According to José Toribio Medina (1989), the letterpress arrive to America through Veracrúz, México, with the Spanish colonizers in 1539 (possibly 1535), almost 100 years before its invention and many years before its full adoption by Spain. Is logical to think that the printing arrived to Mexico and the rest of Latin America with the whole paraphernalia to print in proper Spanish, including complete sets of types.

From 1910 (100 years after its independence) and 1921 Mexico suffered an internal revolution, that had parts of the country virtually paralyzed, during this time many printing devices were destroyed but many others were used to print revolutionary fanzines. Simultaneously, in the U.S. the Underwood Typewriter Company started to produce the Underwood No. 5, and by 1920, the company has sold 2 million of typewriter machines and has achieved a standard design (Cortada, 2000).

In Spanish the acute accent (´) is very usual and less frequently, the dieresis (¨). The accent is crucial for semantics between similarly written words, either with related or unrelated meanings (secretaria=secretary, secretaría=secretariat; ingles=groin, inglés=english) or to recognize articles or tenses within a sentence (El paso= The passage, Él pasó= He passed).

As the Underwood typewriter was developed for the U.S. market mostly, and English is one of the few languages with no diacritics, the invention arrived to Mexico with the technical impossibility to print accents in the uppercase letters. Presumably, the same occur between England and Spain.

This impossibility to put diacritics in the uppercase letters derived in an anonymous thumb rule: “Uppercase letters should (instead of can) not be tittled (atildar, in spanish)”. And this thumb rule eventually became an informal norm. Many billboards and advertising in Mexico, printed or handmade since 1930 had no diacritics in the uppercase letters and this extends to official dependencies. Many people started to write just in majuscules to avoid the effort to remember the orthographic rules for the use of accents. 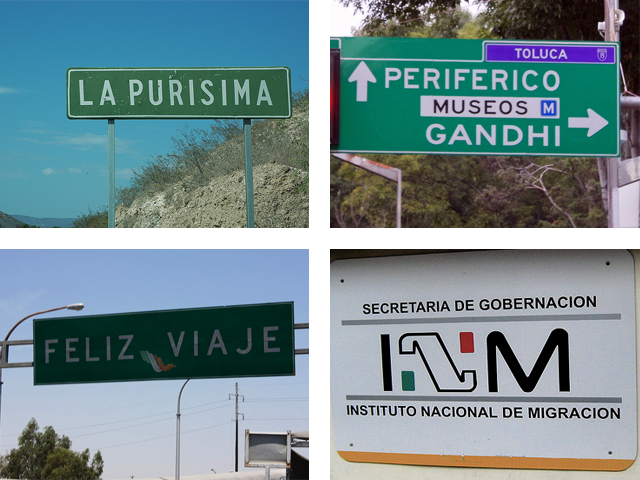 Within few years, this phenomenon extended to formal education and to editorial industry. Books without diacritics in the uppercase letters started to be seen and can be seen until now; road signs and even official or federal official representatives. A very recent and notorious example of this, is the response of the leaders of the London 2012 Mexican Olympic Delegation about the absence of accent in México: “It is written in uppercases”. (EFE, 2012)

The final frontier was reached when people started to use an nonexistent new RAE rule on their arguments. As a response, In the previous version of the Manual of Orthography, the RAE add that apparently unnecessary sentence.

It is important to address that typewriter was not a mass publication, but a self-publication device, as the personal computer was when it was first introduced. In the mass printing process (linotype, developed at the ends of the XIX century [OED b]), the typewriter was between the author itself and the linotype typist, the very first step of the production line.

Nowadays, with the integration of computers to mass media production, the almost unmediated pass from the creation of a document to its unprinted publication abled by the internet, and the use of the computer as a reading device; the possibility for a new discussion about “closure” seems to be opened.

Cortada, James W. (2000): Before the Computer: IBM, NCR, Burroughs, and Remington Rand and the industry they created, 1865-1956. Princeton University Press

—-: Linotype in Oxford English Dictionary, Retrieved from <http://www.oed.com/view/Entry/108768?redirectedFrom=linotype#eid> in Sept 28, 2012

This entry was posted in Uncategorized and tagged Commentary 1, literacy, orthography, spelling, technology. Bookmark the permalink.