Print versus Image: The Development of Multimodal Communication

In “Gains and losses: New forms of texts, knowledge, and learning,” Gunter Kress (2005) differentiates between the words ‘mode’ and ‘medium’ to describe the emergence multimodality in the 21st century. Kress (2005) believes that current semiotic transformations in the modes of representation focus on the significance of image over text; therefore, shifting the distribution of information from the book to the screen (Kress, p.6). Jay David Bolter parallels the discussion about the changing dynamics of visual and textual modes of representation in his chapter entitled: “The Breakout of the Visual” (Bolter, p. 47-76). Bolter and Kress look at several significant themes in the development of multimodal communication: the organizational principles and the authority of new media. Both authors agree that society is exploring multimodalities by disconnecting from the long existing influence of print and moving towards a new landscape where collective representations of knowledge can exist.

Image and print have had a long history of remediation. What we are faced with today is “a readjustment of the relation between text and image” and “the refashioning of prose itself in an attempt both to rival and to incorporate the visual image” (Bolter, p.48). Bolter (2001) describes this transition as being different from remediation in the sense that new technology is not entirely replacing the old; rather, visual and print media are being amalgamated in order to maintain cultural importance. When compared with a computer screen, the page of a printed book offers very few options for design features aside from the style and size of the font of the text. A web-based home page follows the different organizational affordances of hypertext. Visitors pursue different links and read various fragments of information to develop an interpretation of the author(s) meaning. Web pages are organized based on the assumption that visitors come to the site for a variety of reasons, carrying different social and cultural beliefs and have little awareness of who assembled the information presented. The organization principles of current web pages reflect the organization of the outside world and rely on the interests of popular culture. For example, the sequencing of information is no longer up to the author as information on a web page is presented simultaneous, allowing the reader to select information that is relevant to their interest. Modifications to how and where information is stored on the web reflect a desire to speed up the process of retrieval.

Since the creation of print, written words have held a certain authority over image by reinforcing the idea that “what was important would appear in alphabetic texts and might then be supplemented by graphics” (Bolter, p.48). Subsequent to invention of the printing press, mass production of the same text helped to reinforce the point of view of one author. The restrictions associated with accepting the perspective of one singular author is no longer recognized in a highly digitalized society. In Michael Wesch’s video, “Information R/evoltion,” a more current depiction of authorship is presented with his statement that “together, we create more information than experts.” It is evident that accessibility to the World Wide Web has contributed to the declining authority of the author. Early typographic cultures clearly defined the role of the author, whereas the focus of information today is immediacy and comprehensibility. While mainstream search engines serve as an entry points to any topic of interest, more authoritative search engines, such as Google Scholar serve to provide more reliable information. 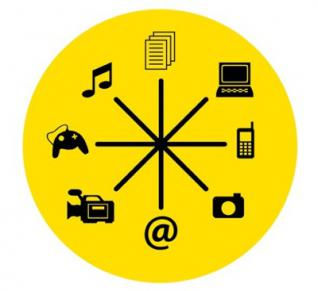 Amid a revolution between old and new communicative forms, the computer screen is evolving by replacing text with more engaging graphics, while printed text is attempting to make changes to design and layout in order to compete with the power of the image. Bolter (2001) refers to this transition the “breakout of the visual” while Kress (2005) contemplates the “Gains and losses” or “New forms of texts, knowledge, and learning,” to explain the developments in new modes of information. The most relevant arguments in the literature are concerning the organization and authoritative transformation involved in digitalized text. Bolter (2001) explains that finding information on the web is not necessarily ‘true’ knowledge, especially for sites such as Wikipedia where information is arranged and edited collaboratively. Kress (2005) assures that traditional books will remain in existence; he predicts that this digital revolution will be short-lived as it is primarily a generational endeavour. The greater question of authority that we face currently is around how to monitor the quality of information. It seems that our focus on the immediacy has come at the cost of trustworthy information. With the emergence of websites that specialize in in-depth analysis, I predict a backlash against several forms of abbreviated information.

This entry was posted in Uncategorized and tagged Commentary 2. Bookmark the permalink.

1 Response to Print versus Image: The Development of Multimodal Communication