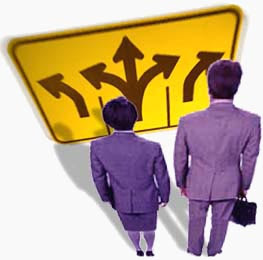 When I talk to prospective graduate students, one of the questions I often get is “How, and when did you decide on your research field/project?”.  But more often I get comments rather than questions of the same sort, “you’re lucky that you have a project you really enjoy. I don’t have a project idea yet, so I don’t even know how to approach professors and whom.” (i.e., they’re envious that I’m signed my life away with a project, and don’t have to make a decision about it.) This of course is assuming that the professor does not have a fixed project for you to take on.

The truth of the matter is that making the decision to do some sort of research in itself is exciting. Pondering on the quest to new knowledge, imagining yourself coding away while someone happens to watch you in admiration, picturing yourself in front of a room full of people talking about new things that the audience never knew but know now because of your work…. the glamour, the excitement, the journey!!

Although I dread at the thought of living a student life for the next four/five(?!) years as a PhD student starting next year, I still jump for joy imagining all the things I could do as a PhD student/candidate and (hopefully, one day) as Dr. Moon (LOL, oh wow, I can’t help but to laugh every time I think of this title).

But there is this factor in our decision making process that makes the journey painful. It’s called making the ‘right’ decision.

We feel that we need to always make the best decision possible because, otherwise, we will look dumb. Especially for someone who has an undergrad degree, and is considering to pursue higher level education, it feels important that you don’t make obviously dumb decisions.

So we ask ourselves, numerous, and never ending list of questions: what exactly would be useful for the world? What exactly can I do that will be cool, and will make my time worthwhile? What on earth would I be devoting years of my life for? What dopeople think is cool anyway? Do I just want a fun project? Do I want to go to a big school? Should I stay in the same school? What about the so-called inbreeding factor? Do I know all that I should know before going into this field? etc etc.. the list goes on.

There are good decisions and bad decisions. But you can’t ponder on it for ever.

Sometimes when you find yourself hesitating to make a decision, that’s because you can probably live with any of the available options (i.e., too much freedom on your hands). If there was a clearly bad choice, and a clearly good choice, you won’t have to ask too many questions before you make your decisions isn’t it?

I realized this just now as I looked at my clock and noticed how many hours I spent looking through specs and reviews of tablets. You know, iPads, Galaxy Tabs, Optimus Pads, etc… the fancy devices that don’t seem to have a particular purpose to many, but are hard to resist for some consumers.

I have been pondering over picking out which tablet to purchase since… oh, I don’t know.. Thursday? Yes, that’s right.

On Thursday, I made the decision to go to Europe by myself for the first time. I shall leave on the 4th, and come back on the 14th after having attended a roboethics conference I have been really wanting to attend. It took a couple of painful hours before I clicked on that ‘Complete Purchase‘ button to buy my flight tickets, although the price was really good, because the airline has ‘No Refunds‘ policy.

Then, I started shopping for a tablet to take with me to Europe, because I don’t want to be carrying my 30-minute battery life  >2kg (?? I’m probably exaggerating, but you know what I mean) laptop with me. My plans are to take one backpack, and an internet enabled device of some sort without much planning. That way I would be able to book hostels on the fly, book trains/flights on the go, and also be able to know where I am without needing to carry dozens of maps and guide books.

The possibility of convenience with a tablet opened the Pandora’s box inside my brain: which one should I get? should I get one as a replacement of my current phone? which carrier do I want to get it from? do I want a contract? how much do I want to spend on this? do I want the giant screen or a smaller one? buy into Apple or the Android world? etc etc..

Then something clicked in my brain — an aha! moment.

I remembered that went through the same kind of painful thinking process when I was super stressed a week or so ago.

My stress was somehow redirected to me making a decision whether to cut my hair or not. I spent hours trying to decide, looking at photos of people who has similar facial features and the type of hair I may want to try, trying photoshop etc… Then, when I realized how much time I had spent on making such a tiny decision, I had had it. I realized that I won’t stop thinking about it if I don’t cut it. 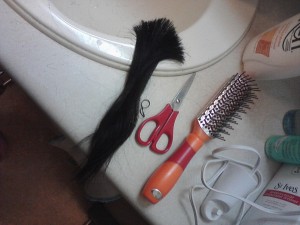 It didn’t matter whether the hair was to be perfectly beautiful. It didn’t matter whether it was a good idea or a bad idea. The point was that these decisions are actually small when you think about it. I can be happy whether I cut my hair or not, but that I was happier once I cut it just because I didn’t have to think about it anymore – the damage was done and irreversible.

I think most of the time, we try to weigh the pros and cons of things that we don’t really know how to measure. We don’t know what to expect, yet we try to blindly predict things so that we can somehow make better decisions.

I think decisions regarding research is kind of like that. Unless you know exactly what you want, you can ponder on and on about whether a project will be really THE project for you, or whether you will have made the right choice in going into a particular field of research. But the truth is, you won’t know it unless you try it out. And chances are, if you have the will, any project you take on will be an epic project for you regardless of whether it’s the next hottest thing on earth or the technology of the former generation. Because you’ll make it an epic project.

On that note, I think I’m going to get a Galaxy Tab, just because it’s cheaper, and move on to the things that matter more (things that don’t occupy my time with weighing pros and cons forever).

And now, here’s a TED talk to go with today’s theme (https://www.youtube.com/watch?v=LTO_dZUvbJA&feature=youtu.be)