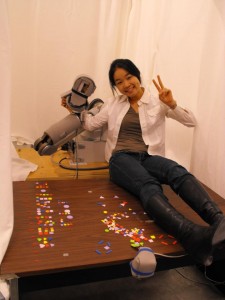 It’s been a while since my last post, but there’s a good reason for it.

I finished the last set of my experiments for my masters and that concludes the end of the things that I need to program, tighten, loosen, and crack open in the literal sense of things.

I had over thirty subjects come in to the lab, and interact with the robot I had set up for the experiment. The  experiment was called Sorting Hearts and Circles with a Robot, and I am so… so… glad that so many people were interested in participating. Thank you participants! Big hug goes to you all.

And now that all the experiments are done, I could not wait to start analysing the data. It’s crazy how work works. You get one thing done, and then you find another thing to get done. It’s a never ending cycle.

However, I felt really good about the new work that sat staring at me on my desk — data.

For over two years, I had been working to get here. My goodness I had three different phases to my study, and thank goodness I finished them before my patience and all virtues in me dried out.

So, while I started to busy myself with the newly collected data, I was reminded that it was time for me to take down my experimental set-up.

It’s a weird feeling to take down something that you’ve worked so hard on. It feels like you’ve constructed a very elegant multi-layered cake with the most beautiful decorations and fillings by working hard for hours, and then you are asked to destroy it – with the reason being, that’s the way things are for all cakes, no matter how beautiful.

I had been working on this system for… about half a year now? I know every single line of code that made the robot do its thing, and I like to feel like I have my own personal ways of fixing the robot when it crashes on me – the ways that I had to learn by trial and error. You know… there’s that feeling of … there must be something special produced from this that will last forever.. the things that makes all the late nights and early mornings worthwhile. But you aren’t quite sure what that is yet. You don’t want to say that ‘I’ve made some scientific contribution that will last forever’ because it feels like your attachment to your project is stronger and more important than whatever the scientific contribution will do for the world. You know… a breakup from a long term relationships tend to give you that kinda feeling…

So, the day I was supposed to take down the system, I decided to take lots of videos of it, take pictures of every single corners of the set-up, and do everything special I could imagine. Collecting everything that will last.

And when that was all done and over with, I sat.

I sat there staring at the robot.

And the robot sat there, like it always was at the end of the day. Its arms folded and cuddled up.

It kind of felt like having a breakup talk.

Don’t worry, I am not crazy. I do not really consider the robot my ‘friend’ or a relationship material of any sort.

I just have some attachment issues with my projects.

As I sat there having these breakup talks, somewhat feeling a sense of relief, but also doubting whether I am making the right choice (as in, should I get a few more subjects before I take it down?), my labmate Navid looked at me and said ‘All done?’

Then I realised that Navid will be the one taking over the robot now – for his experiments, of course. And that reminded me that there’s going to be many more researchers working with this robot. It was clear that I need to clear out of its way.

So I took one last couples picture with the robot, with the spongy hand that I made for it and stuff.

Then I had to go out for dinner with a friend of mine to celebrate the end of experiments, and the start of results and analysis. Afterwards, I did feel the temptation to go back to the lab when I came back from  the dinner at like.. 11ish.. but I resisted. This was it.

A clean breakup is a good breakup. No middle ground “let’s be friends” stuff, and no regrets.

I learned so much from this project, and I am so glad that the experiment is over.

I am moving on.

Let’s get the data party started!! 😀