A couple of weekends ago, I attended the Creating Connections 2013: Working Together to Transform our World conference. Creating Connections is a biannual conference that aims to empower women in STEM (Science, Technology, Engineering, and Mathematics) by fostering discussions and conversations about gender issues in these fields.

If you are curious why we have these kinds of conferences in the first place, what people talk about at these conferences, or not sure what the whole gender issue is, then maybe I can help do my part to relieve your curiosity. And please allow me to say this, but if you are one of those people who roll their eyes when hearing about women in STEM initiatives and think, “Ugh, seriously? Another one of those women in engineering things? Women have it so easy. Why don’t men have these things?” then I hope you this post will be helpful in changing your attitude about it, and then maybe we can be friends… eh hem.

Before you read on further though, here’s a disclaimer.

As a blogger who values posts that are written to be true to the writer’s opinions/views, rather than to serve secondary motives, I need to be honest with you and state that the conference was organized by one of my supervisors and people in the department I have close interactions with — i.e., I am heavily biased to highlight the positives, and positives only because they are really awesome people. I am not lying when I say that the conference was really great. It was really well organized, with amazing keynote speakers and panelists such as Drs. Roberta Bondar (Canada’s first female astronaut), Aimee Chan (CEO of Norsat), and Jennifer Gardy (Senior Scientist and guest host for Daily Planet), just to name a few out of the many.

But at the risk of making this entire post potentially brown-noser-sounding, I’m going to skip over all the compliments (albeit well deserved). Instead, I am going to talk about the meat of the 1.5-day conference, things that were said and unsaid, and stories that made people laugh and think hard – I might have to have a part II of this post now that I think about it. I think that would do more justice to the spirit of the conference. Given the fact that all four of them are science communicators for public media, the panel discussion itself largely consisted of how media portrays men and women in science. There are some general and historical background that allude to the gender problem in science. Historically speaking there are brilliant women scientists who were left more in the background than they should’ve been because of their gender (e.g., Rosalind Franklin, Marie Curie). Bob Mcdonald said that even today, it’s hard to get female experts to talk on Quirks and Quarks, not because they don’t try to look for them, but because there really aren’t that many. The panelists alluded that the issue may lie in gender stereotyping in the media. When kids see more male scientists than women scientists on TV, are girls more likely to think that science is more of a boys’ thing? The close connection between media and how children may stereotype scientists was echoed by Saturday morning’s keynote speaker Dr. Roberta Bondar. She humorously said that when she was growing up, she hadn’t matched astronauts to be a particularly male occupation because they were always wearing these thick suits. She thought they were known as space-people – you know, just another kind of people, like Asian-people living in Asia.

Then someone in the audience asked a question that a lot of people dare to ask women in STEM. That is, “why is it important that more women are in STEM?”

The panelist framed it well I think: It really shouldn’t matter whether you are a male or a female. The important thing is that we put down the barriers and give people equal opportunities.

And I think the key notion that a lot of people don’t realize is that providing equal opportunities isn’t simply accomplished by disregarding gender information when admitting students into STEM classes in universities.

In my opinion, the equal opportunity idea also has to do with making sure both boys and girls are equally encouraged to pursue their careers in STEM. And how would women in STEM be able to encourage careers in STEM to the next generation of scientists if today’s social infrastructure (e.g., having female washrooms in every building) doesn’t properly understand or tailor to gender differences?

To give you my personal anecdotes here, I had nothing but support and encouragement from my parents to pursue engineering when I was growing up. Historically speaking, the Republic of Korea (yes, the South one) was a third-world country coming out of the Korean War. Within only a handful of decades, it bloomed into a first-world country through lots of hard labour, military services in foreign countries, and adoption and development of science and technologies – this is known as the Han River miracle. That’s the same period when companies like Samsung, LG, Hyundai and Kia came into being and grew up to be the international giants of today. So my father’s generation grew up thinking that if you got an engineering degree, you are guaranteed a job and a prosperous life. The fact that South Korea’s new and first female president Park, daughter of a former president of Korea, has a degree in Electrical Engineering speaks to how pursuing engineering was encouraged in the country. That thinking was passed on to me and my sister, and no one discouraged me from wanting to pursue engineering even when I was the only borderline failing student in my elementary school math classes.

But after I had been in Canada for about four years and was applying to the University of Waterloo for their engineering undergrad program, one of my high school science teachers pulled me aside and asked me to reconsider my options.

She told me a story of her female childhood best friend who went to become a civil engineer, worked on sites with men most of the time, and came back a completely different person – much more masculine, blunt with swearwords in her speech, and overall not a very soft and tender kind of person my teacher remembered her to be. She was genuinely concerned that I would go through the same kind of phase as her friend and become a very manly and tough kind of person if I went to pursue engineering. I guess engineering was considered much more different in her mind than pure sciences, considering her occupation. Of course, I still went to get my degree in engineering anyway. 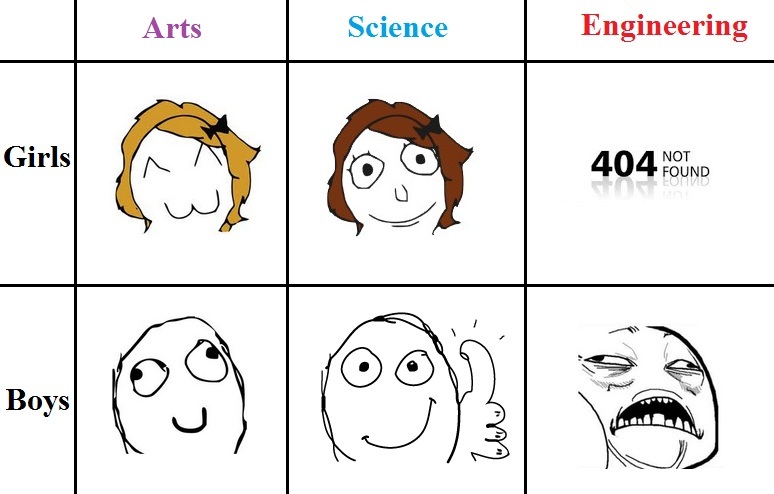 Surprisingly, when I went to KAIST (Korea Advanced Institute for Science and Technology) and attended their mechanical engineering classes as an exchange student, the classroom was comprised of over 40% female students.

Believe it or not, the female students were just like typical Korean university female students in other programs. They wore heels, makeup, and proudly carried a feminine purse with equally feminine cell phones inside. And such classroom scene was accepted as a norm. That was really not the kind of lecture hall scene I was used to from UW. So I learned to wear heels and replaced backpacks with purses during my four months of gender balanced engineering experience in Korea.

Looking back, I think that my high school teacher really wanted what’s best for me, and that speaks to the problem.

I agree that after having been in Canadian engineering schools for almost a decade (holy cow!), I am different than I used to be. I think a lot of it came with some lessons I learned along the way in having to work in a male dominated environment. Would people who have known me or are getting to know me be dissuading their kids from becoming female engineers? Am I reinforcing a stereotype of female engineers in a particular direction? Maybe. I am not sure. But I think it is clear that we need to break this cycle of gender stereotyping and to educate parents and teachers that girls pursuing STEM is something to be encouraged – at least as much as boys pursuing STEM. And in my opinion, that includes educating men in STEM about women in STEM issues so that I don’t get the default ‘holy cow’ look on men and women’s face when I say I am pursuing a PhD in robotics, and partially because that could have avoided diaper issues Dr. Bondar had when she went to space and realized that space suites were mainly designed with only male anatomy in mind.

PS. Actually, now that I think about it, I hope people continue to have ‘holy cow’ responses when I say I am pursuing a PhD in robotics, not because they’ve never imagined a female roboticist in their lives, but because they didn’t expect me to be so much older than I look 😉 lol!!!