The University of Victoria has contracted with the Canadian telecom giant Telus to deliver a “customized” MBA program to Telus employees.

Telus executives will be teaching some of the courses; the instructors from UVic will apparently be teaching on contracts separate from their regular employment with the university. The details are sketchy because the agreement between the UVic and Telus is secret.

Here’s university’s press release on the new program, which is offered in the Sardul S. Gill Graduate School within UVic’s Peter B. Gustavson School of Business. The program gets started this month.

The program is the brain child of Telus’s “Chief Envisioner,” Dan Pontefract. Pontefract described the context and goals of the program in an Forbes magazine article this past August, “Going Back To School With A Corporate MBA Program.” (A Huffington Post version of the article appeared in September, “Why Corporations Should Launch Their Own MBA Programs“).

Victoria’s Times-Colonist and The Tyee have also run articles about the program.

Neither Telus nor UVic have (or plan to) release details of the financial agreement, as The Times-Colonist reports

As for the revenue, neither Telus nor UVic would divulge what Telus is paying. Klein noted all costs, including establishing the program and its infrastructure, tuition and overhead costs, were being covered by Telus and there is also a financial consideration that amounts to a profit for the school.

The program raises a raft of questions about academic governance, academic freedom, the vulnerability of public universities to corporate incursions as a result of budget slashing governments.

This program represent the next step in the ever evolving corporatization of the university, another neoliberal education policy that socializes costs and privatizes benefits.

I appeared on CBC Radio’s The 180 with Jim Brown (along with Pontefract) to discuss the UVic/Telus MBA program and the  corporatization of academe.

The 12 minute segment will be broadcast tomorrow (October 4, 2015), but you can stream the segment online now: Do private programs belong at public universities?

NEW MASTERS PROGRAM IN THE INSTITUTE FOR CRITICAL EDUCATION STUDIES

The new UBC Masters Program in Critical Pedagogy and Education Activism (Curriculum Studies) has the goal of bringing about positive change in schools and education. This cohort addresses issues such as environmentalism, equity and social justice, and private versus public education funding debates and facilitates activism across curriculum and evaluation within the schools and critical analysis and activism in communities and the media. The cohort is organized around three core themes: solidarity, engagement, and critical analysis and research. 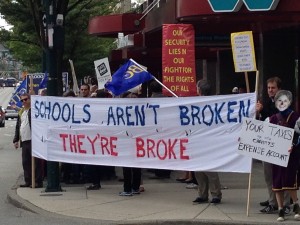 The new UBC M.Ed. in Critical Pedagogy and Education Activism (Curriculum Studies) is a cohort program in which participants attend courses together in a central location. It supports participation in face-to-face, hybrid (blended), and online activism and learning.