Multimodal Modes of Representation in Education: Supporting the Diversity of Learning Styles

In today’s century, as we discuss digital literacy, internet literacy, media literacy, and even television literacy (Rosen, 2009); it is clear that literacy is developing new accents that have become difficult to define in a few words.  Rosen (2009) stated that “if we expect our children to be competent citizens, compete in the workplace, and lead productive lives, educators and parents need to plant the seeds of media literacy early in the educational arena” (p. 177).  The iGeneration (Rosen, 2009) can access information instantly so educators have to find new ways to interact with their digital native students (Prensky, 2010).

Despite their use, multimodal modes of representation can be seen as a revolution.  Hence, Kress (2005) suggested that their use has caused two kinds of revolution; “of the modes of representation on the one hand, from the centrality of writing to the increasing significance of image; and of the media of dissemination on the other, from the centrality of the medium of the book to the medium of the screen” (p. 6).  In fact, in order for people to better understand the world, “the medium of the screen” has been used in multiple forms over the last century and is now part of our contemporary cultures.

Therefore, multimodal modes of representation found in digital technologies have extended our view of literacy.  Dobson and Willinsky (2009) stated that the uses of computer and word processing as well as the rise of Internet and hypertext have ensured “the emergence of digital literacy” (p. 2).  Likewise, using multimodal modes of representation in education signifies that, with the diversity of needs and learning styles, more students will be reached; hence, it should enable them to enter the workforce more successfully.

Students’ Diversity of Needs and Learning Styles: A Reality in Education

Further, some individuals are more at ease with “the immediacy of the picture to the mediation of the code in our search of a tangible, ‘real’ reference that would render the sing transparent” (Bolter, 2001, p. 57).  In addition, Bolter (2001) suggested that viewers examining a picture will determine its significance without having any written text by it (p. 59).

Interestingly, over the years, I have noticed that the visual modes of representation had an effect on some students’ interest at reading a text, or, for instance, at participating in a discussion forum.  In particular, it was noticeable how boys responded to visual modes of representation in contrast with girls.  Hence, it was evident enough to change and use multimodal modes of representation like pictures, videos and hyperlinks along with the reflection questions.  Indeed, boys’ participation changed instantaneously; really, “a significant digital divide in regards to gender” (Dobson & Willinsky, 2009, p. 13) was observed in relation with how at ease males can be with computers compared to females.

Nevertheless the fact that learning styles differ within the student’s population, and perhaps within genders, learning for some students with special needs can mostly occur with the help of visual modes of representation.  There is still a lot to be investigated in this area but it is encouraging seeing that some students can now access knowledge according to their capacity and/or potential by using the proper digital technology, a fact that would not have been possible with print texts or textual modes of representation alone. 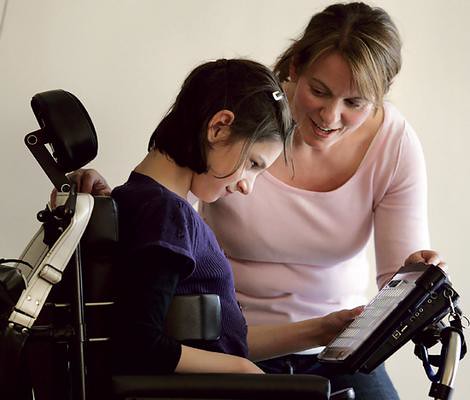 As the 21st century working place is largely looking for digital skilled employees who can collaborate and exchange ideas on a daily basis using digital technologies, it is critical that educators reshape their pedagogy, “a pedagogy that opens possibilities for greater access” (The New London Group, 1996, p. 72) and where no one should be left behind.

Even though the working place is not always accessible to all, it is the parents and the educators’ responsibility to provide students the digital skills they need in order to enter the workforce; for instance, by enforcing placements in the working place where students can develop and reinforce their abilities.  Hence, schools have the obligation to prepare all students for the working life; digital technologies should help students with particular needs (e.g., students whose condition might impair them physically) enter that world.

Furthermore, the New London Group (1996) has discussed the necessity “to consider the implications of what we do in relation to a productive working life” (p. 66) but the group has not mentioned anything about the diversity of people living in our communities.  From literate to less or non literate, there is a wide range of people; how can all students reach the successful lives they deserve?  How can we be more aware of ‘differences’, be willing to eliminate the barriers between them, be open-minded?  Thus, this is an issue for which more research should be conducted; perhaps people’s conscientiousness in that regards is not there yet.

Finally, students need to engage with school; even though they love learning they do not necessarily like school (Wesch, 2008).  For this reason alone, educators have to find new ways of interacting with digital natives.  Consequently, developing students’ digital skills will help them getting into the 21st century’s workforce, as some skills are expected from them; and schools are the best place to teach them.  Moreover, the use of digital technologies and multimodal modes of representation will help assisting educators with the diversity of their students’ learning styles, and, also, those with special needs; it should help preparing them for a successful life.

Ong, W. J. (2002). Orality and literacy: the technologizing of the word. London: Routledge.