Faculty of Law, University of Victoria 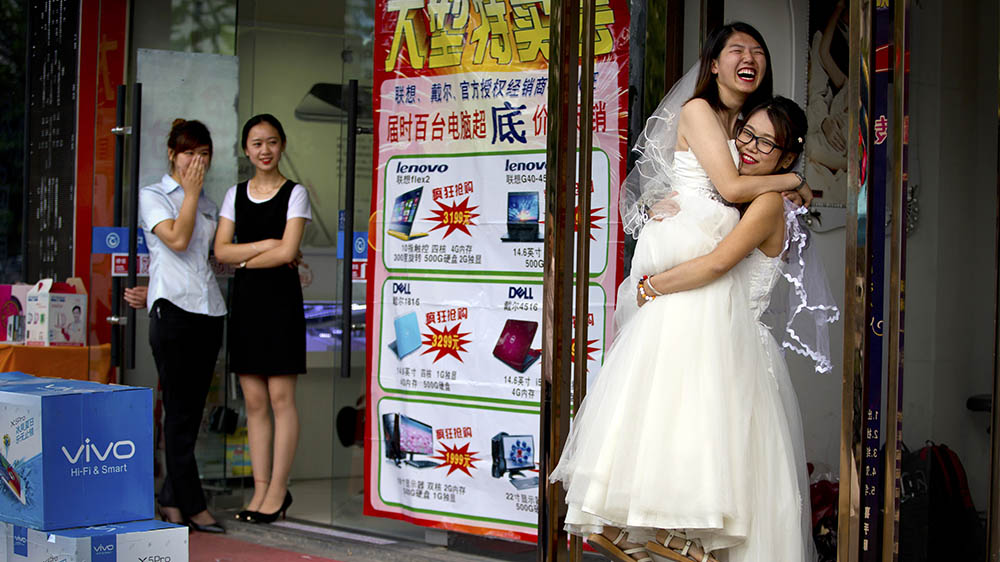 Li Tingting, second from right, laughs as she is lifted off the ground by her wife Teresa Xu, right, outside of a beauty salon where the two were preparing for their wedding as clerks from an adjacent shop look on in Beijing, Thursday, July 2, 2015. A prominent Chinese lesbian couple held a simple ceremony Thursday to announce their informal marriage, in their latest effort to push for legalization of same-sex unions in China. (AP Photo/Mark Schiefelbein)

I had a good night’s sleep after watching Ek Ladki Ko Dekha Toh Aisa Laga (How I Felt When I Saw that Girl), a 2019 Indian Hindi-language romantic comedy-drama. The film features the story of Sweety, a closet lesbian who comes out to her conservative Punjabi family in the small town of Moga. Sweety’s friend, Sahil, offers to put on a play starring Sweety and her girlfriend and telling their love story. The whole town is invited to the play. As the audience notices that the play is about a romance between two women, many start to leave, though some remain. Sweety’s father, angry at her decision to be with a woman and the potential humiliation it would bring to the family, changes his attitude when he realizes that Sweety has suffered from discrimination and loneliness for the whole time. When the lesbian couple is blamed as filth that challenges Indian tradition and as corrupted by the West, the father rushes onto the stage to interrupt the performance and defend the couple. The father delivers the message of love: “It’s not an illness that needs a cure. It’s love. Having love is blessing by the God.” The audience gives a standing ovation to both the performance and the father’s speech. After the play, Sweety suggests that Sahil should take his play to more small towns and villages to help the Sweetys there.

I was in tears at the end of this queer Indian story: a lesbian in a patriarchal culture, which assumes that a woman’s worth is determined by her eligibility as a wife, gains support and understanding from her father and members of the local community. As a law and society scholar studying the impact of multiple levels of social ordering on women’s marital choices in non-Western contexts, I felt reassured it is not impossible to challenge the belief that “a heterosexual marriage is a must for women” even in conservative social environments.

Waking up on a Sunday morning and scanning news on my phone brought me back to reality: a spokesperson for the Chinese national parliament’s Legal Affairs Commission announced that the cultivation and promotion of “Chinese family virtues” would be stressed at the third reading of the marriage section of the draft Civil Code. Again, “family virtues” become the focus for law regarding marriage and families. I felt the need to get up and write something.

This is not the first time the Chinese government uses law to regulate morality and family relations. The 2013 Elderly Law was another recent example. As urbanization and economic development push many young people away from their homes, the lack of time and energy on the part of adult children to visit and support the elderly has become a concern of the Chinese state. The government legislated filial piety in 2013, making it a legal obligation under the Elderly Law for adult children to provide emotional support to elderly parents who reach the age of 60 and pay regular visits to them. Moreover, for several years, Chinese President Xi Jinping has been calling for efforts to enhance traditional Chinese family virtues and civility for social harmony and national development. Xi has stressed the importance of family love, family values, and family bonds in his speeches in recent years. Xi’s family values emphasize intergenerational intimacy and the unique role of women in the family to care for the elderly and educate children.

Zang based his argument on the following three concerns: First, some people in particular areas may accept unmarried cohabitation, but it is far from having reached a consensus in China as a whole. Moreover, if the law recognizes unmarried cohabitation, it would pose a threat to the current system of marriage registration. Second, people choose unmarried cohabitation for various reasons, making it difficult for the law to adopt a one-size-fits-all approach to protect the interest of those involved. Third, a variety of legal issues regarding unmarried cohabitation, such as property division and custody, require further discussion.

While it may be true that some people are against the idea of unmarried cohabitation, Zang fails to explain why the law should wait for everyone’s attitude to change instead of taking the lead to encourage its citizens to respect people who choose unmarried cohabitation, including alternative family structures that go beyond a de facto marriage. If a play in a small Punjabi town can help improve the real lives of those who think differently from the dominant social norms, why should a powerful state like China lose its confidence in its law in making such a difference?

In my view, a more diverse perception of family among its citizen is simply not in alignment with government’s goal to promote traditional family virtues and family values. Unmarried cohabitation, from the perspective of those in power, is less stable than heterosexual marriages and could endanger the system of social control that relies on families and local communities to govern individuals. In a relation-based society such as China, guanxi, loosely translates into the network of personal relationships or connections, is often considered to be the “supreme law” by most people. The attitudes of other people are often of great importance in shaping an individual’s decisions regarding marriage. When public attitudes toward marriage generate a system of control to channel unmarried individuals to pursue heterosexual marriages, the last thing the state wants to see is a more inclusive social environment for alternative family forms. To some extent, this also explains the state’s refusal to legalize same-sex marriage, its denial of single women’s access to assisted reproductive services, and, ultimately, its enthusiasm in promoting traditional Chinese family values.

I understand that the interest of the family always trumps that of individuals in societies influenced by Confucian norms. I am not suggesting that we should challenge the mindset of people or discourage them from making sacrifice for the family. But I am concerned about the future of many Sweetys in China. For women who delay or forego heterosexual marriage, the marriage section of the draft Civil Code will not only leave their interest vulnerable, but also reinforce social discrimination by emphasizing the values of heterosexual marriage.