Earlier this month, in a widely-followed online public finance seminar series, the German economist Nadine Riedel presented a paper titled “What You Do (and What You Don’t) Get When Expanding the Net – Evidence from Forced Taxpayer Registrations in South Africa”. Notwithstanding the specific setting of Professor Riedel’s study, the topic is of wide relevance to low- and middle-income countries: how can the government locate and register more operating businesses for purposes of taxation—and what can the government expect when it succeeds in doing so?

In fact, the context of the study (which I will refer to as Lediga et al 2020, following the citation convention in economics) may bear greater affinity to Asia, where a large portion of countries are middle- or high-income, than to other countries on the African continent. South Africa is an upper-middle-income economy (like China, Indonesia, Malaysia and Thailand); its tax-to-GDP ratio is already high at 29%; and the South African Revenue Service (SARS) has a reputation of competence. Even in such a setting, getting businesses to register for tax purposes, which is a big part of moving firms from the informal sector to the formal sector, seems no easy task—or at least it is so traditionally thought.

Lediga et al 2020 studies two incidents—in 2008 and 2014—in which SARS enhanced tax registration simply by taking firm data from another government authority, South Africa’s Companies and Intellectual Property Commission (CIPC). Any business must register with CIPC to formally attain corporate status. Through this simple intra-governmental data sharing, SARS expanded its roster of taxpayers by 11% in 2008 and 8% in 2014.

Two facts are already notable here. First, around 10% of firms that formally register with one government authority fail to obtain a taxpayer ID as required by law, which seems to be a rather significant level of tax non-compliance. Second, all it takes for SARS to address such non-compliance is to obtain information from CIPC, and send out letters to the firms “registered by force” to remind them to commence tax compliance. The administrative costs for such SARS action are minimal. If tax registration is an important policy objective, then an obvious question is why SARS has not done this more often—and whether there are similar low-hanging fruits in other countries for enhancing taxpayer registration.

Lediga et al 2020 focuses on not this question but the consequences of forced tax registration. They remind us that for tax collectors to raise revenue, taxpayer compliance must increase along all of several distinct margins. Registering with the government is only a first step. The taxpayers must also file tax returns in accordance with law; they must report their tax liabilities truthfully on such returns; and they must end up actually paying what they owe. Because of this, even when taxpayers are successfully brought into the government’s registration “net,” no significant increase in revenue may result.

This may seem just commonsense. The theoretically interesting question, which Professor Riedel and her co-authors try to tackle, is how taxpayers’ tendencies to comply along these different stages/margins are correlated. For example, does increased compliance along the registration margin drive down compliance with truthful reporting, or vice versa? Lediga et al 2020 offers some intuitions about this question: if the likelihoods of getting caught for non-compliance in these different margins/stages of compliance are separate, then taxpayers may seek to cheat in the stage where it is easiest to do so. However, the model they construct does not yield determinate results.

As pure factual observations, the authors report that even for corporations voluntarily registering with SARS, only about 27.3% file an income tax return.  By expanding registration through intragovernmental data sharing, SARS probably ended up registering taxpayers that are even less likely to comply in the subsequent stages. Thus, compared to the 27.3% filing rate of firms voluntarily registering, only 8-10% of firms “registered by force” file corporate income tax returns.

The very low return-filing propensities of both voluntarily and forcedly registered South African corporations seem surprising. (During Professor Riedel’s presentation, some asked whether many of these corporations are exempt from filing returns because they owed no tax—the current version of the paper does not contain these institutional details.) But if we accept this fact of very low return-filing propensity, and if, further, we think that (i) increasing the rate of timely filing of tax returns is itself an important policy goal, and (ii) increasing the rate of registration can lower the rate of timely return filing, then we may even think that the rate of taxpayer registration in South Africa was too high: we may want to lower rate of registration if a higher rate of return filing is desirable.

This raises the basic question of how we should value the outcomes of registration, return-filing, timely payment, etc.: if they are not important in themselves, what are the ultimate policy objectives for which they represent merely means? Lediga et al 2020 seems ready to accept that raising tax revenue (in the short term) is the most important objective. Yet the authors mainly examine whether the newly registered firm paid significant amounts of corporate income tax. The answer is, as one might expect, No. The reason that this is an expected outcome is that in perhaps most countries, the median corporate taxpayer in terms of profitability is making either a negative profit (i.e. loss making) or only a small profit. The firms that fail to comply with the most basic legal requirements of tax authorities are likely all to fall below that median.

In any case, whether raising tax revenue in the short term is the most important policy objective is debatable. In a book on Chinese taxation that I am currently writing, I explore the issue of how to evaluate the various compliance outcomes of tax administration, and argue that there are some important but often-neglected institutional objectives. I will sketch some of these arguments in subsequent blog entries. But just to give a hint of the relevance of the Chinese case: Chinese tax administrators have long relied on intra-governmental data sharing for taxpayer registration. Indeed, their performance is evaluated on how many taxpayers already registered with the Industry and Commerce Administration (to which the CIPC sounds like the South African counterpart) are registered for tax purposes. And back in 2000, when China’s GDP per capita was not much higher than the GDP per capita of Sub-Saharan Africa (and comparable to the GDP per capita of Tanzania and Uganda today), the national average rate of taxpayer registration—relative to registration with the Industry and Commerce Administration—was 97%!

This is shown in the first 12 columns of the following table from the Tax Inspection Yearbook 2002: 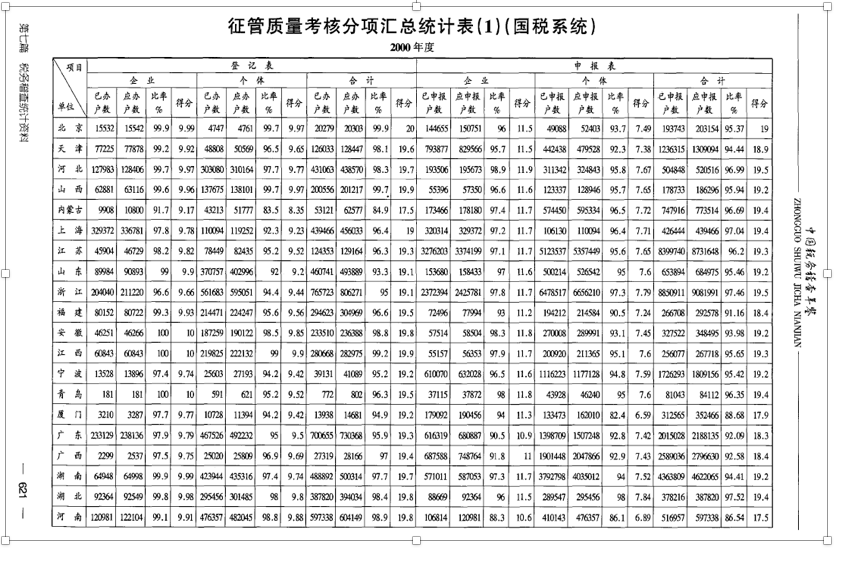 I will also further comment on this table in subsequent blog entries. But the overall takeaway from the Chinese case is that there is no mystery to getting taxpayers registered: it can be done. The main question is what the benefits and costs are for doing so, and what actually motivate states to do so.