Since 2010, an ever-increasing population of Chinese firms has come to enjoy a 10% or even 5% preferential corporate income tax rate. In an earlier blog, I discussed some legal nuances that explain how these rate cuts for “small and micro-profit enterprises” became available, even though the statutory rates under the Enterprise Income Tax Law remain unchanged. It turns out that the Vietnamese government adopted some similar, temporary corporate income tax rate cuts in 2009 and 2011-12 (initially, also in response to the Global Financial Crisis). For smaller Vietnamese firms, the tax rate was reduced from 25% to 17.5%. In a paperpublished in the National Tax Journal last year, Professor Anh Pham from George Mason University presented interesting evidence that about half of Vietnamese firms failed to claim the reduced tax rate during the relevant period.

A general reason why findings of this kind are of interest is that they demonstrate how many tax policies that look good on paper may fail to elicit responses from taxpayers. In a recent study, for example, two Chinese scholars argued that many firms in China may have been unresponsive to a policy of accelerated depreciation introduced in 2014, because these firms already engaged in such high levels of tax avoidance or evasion as to result in little marginal tax benefit from accelerated depreciation. Even in the U.S. and Canada, there have been decades of controversy about whether accelerated depreciation policies are truly effective: a very large proportion of firms in loss positions, for example, gain almost no benefit from claiming additional depreciation deductions.

Professor Pham’s findings from Vietnam, however, are particularly notable in a couple of respects. Most importantly, she suggests a striking reason why Vietnamese firms may have failed to claim the simple tax benefit: the government just neglected to tell taxpayers about it! According to Professor Pham:

“[The] policy was publicized on TV and in major news outlets. The central government     also issued instructions to local tax officials on how to determine eligibility. However, individual firms were not notified about the tax cut, nor was there any notification of the tax cut in the corporate tax forms. To apply for the tax cut, a firm had to fill out a separate one-page form, also used for various other tax policies…Even in this form, the 30-percent temporary tax cut was not listed as a type of reduction. The firm needed to circle ‘Other’ and explain the type of reduction for which it would like to apply.”

“The extra step of filling out a form to claim the tax cut may seem strange at first, but the tax office considered the 30-percent tax cut just another policy among various others that firms could apply for. The majority of taxes in Vietnam are filed on paper. Since the tax cut was temporary, the tax office did not want to change and reprint all the corporate income tax return forms or other tax treatment forms.”

This sounds like a rather abject bureaucratic failure: apparently, TV airtime and newspaper space are viewed as inexpensive, but printing tax returns is considered costly!

While there are probably more charitable contextualizations of this aspect of Vietnamese government failure, there is arguably a generalizable takeaway: the content of tax law needs to be communicated to taxpayers, and the reliability of such channels of communication may be a determinant of the effectiveness of tax incentives.

Professor Pham also studies other possible explanations of firms’ failure to claim the rate cut. She hypothesizes that firms that have a “history of a tax avoidance” are less likely to claim the rate cut, for fear of being audited upon so claiming. This aspect of her paper struck me as quite tentative, however. For one, Professor Pham mentions that aside from awareness of the policy, the cost of claiming the rate cut was low or non-existent. In particular, no one needs to obtain approval from the tax authorities. If the general rate of audits in Vietnam is fairly low (the paper offers no information in this regard), then it is unclear why claiming this tax benefit is more likely to trigger an audit than anything else on tax returns.

Lastly, one surprising aspect of the Vietnam study has to do with a crucial empirical detail. Because her study does not rely on tax returns, Professor Pham has to infer who claimed the rate cut from effective tax rates (ETR) she calculates based on firms’ financial statements. The distribution of ETRs among Vietnamese firms she reports, however, is unusual in the relatively low proportion of firms reporting zero or negative profit. In the histogram below from the paper, for example, one sees that the ETR distribution among Vietnamese firms is tri-modal: it has three peaks at 0%, 17.5%, and 25%. The density for firms in the latter two peaks are higher than the first peak: 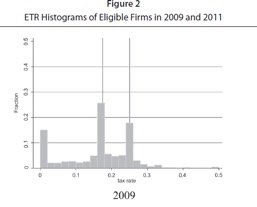 This is surprising because in most economies—indeed even in the U.S. and Canada—the largest proportion of firms are loss-making or generate profits close to zero. The highest mode in the ETR distribution, therefore, is expected to be at zero. The following two graphs, for instance, illustrate the ETR distribution for Chinese firms in two of the largest sectors (i.e. wholesale and retail, plus manufacturing) from one province:

Clearly, the concentration of Chinese firms at zero ETR is much larger than that shown for Vietnamese firms. Insofar as the zero ETR is attributable to losses, it would also explain why many Chinese firms may be indifferent to tax incentives that assume positive taxable income.

The unusually low proportion of zero-ETR firms in Professor Pham’s study thus seems like an anomaly. Even though it may not directly affect any of her conclusions, it leaves an open question for further studies of Vietnamese taxpayers.