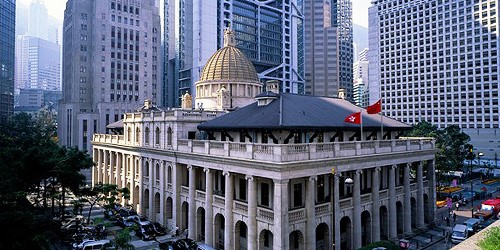 In a recent talk at the Centre for Asian Legal Studies, Michael Blanchflower SC, former Assistant Solicitor General of Hong Kong and practicing criminal law barrister, described the transition of the “Hong Kong Protests: From Peaceful Society to Petrol Bombs”. Since June 2019, the most violent and continuous social unrest in Hong Kong for over 50 years has unfolded until today, with no end in sight. Already, multiple deaths and billions of dollars of damage have resulted from civil unrest.

In the past, China’s Central People’s Government (CPG) has experienced peaceful protests in Hong Kong. After Britain and China entered into negotiations, they agreed that Hong Kong’s way of life would continue post July 1997: it would be a part of China as one country, but represent “two systems”. From that point onward to the present day, the Basic Law of Hong Kong serves as a de facto constitution. In 2003, the Hong Kong government sought to introduce a law pursuant to Article 23 of the Basic Law which would address sedition, treason and succession against the CPG. Although this was within the jurisdiction of China to handle international affairs and defense, the Hong Kong people saw this as an encroachment on their independence. 500,000 people peacefully marched against the proposed law. The government took notice and withdrew their proposal, despite the fact that they were legislated under the Basic Law to have these powers. Mr. Blanchflower notes that this event illustrated the CPG’s accountability to the people of Hong Kong.

Mr. Blanchflower provided the following background to the introduction of the Fugitive Offenders and Mutual Legal Assistance in Criminal Matters Legislation in 2019. Prior to 1997, UK extradition treaties extended to Hong Kong, but when that could no longer be the case, Hong Kong legislated the Fugitive Offenders Ordinance. This act instigated no real change, as Hong Kong would continue to maintain its existing extradition treaties with other countries. Most notably, China was excluded. This can be understood in terms of the fact that, under international law, extradition fundamentally requires the expectation that there are sufficient safeguards to ensure the other country’s legal system is compatible with the source country’s values.

In 1997, Regina Ip, Hong Kong’s then Secretary for Security, assured the Hong Kong people that before there would be any contemplation of the surrender of people from Hong Kong to China, there would be public consultation on the details of any proposed renditions. However, in May 2019, the government proposed a quick amendment to the Fugitive Offenders Legislation, with no public consultation or consultation with mainland authorities. The proposed amendment was a radical departure from the existing law and would allow the surrender of one fugitive to any country with which there was no treaty.

Normally, a treaty is ratified through the legislative council, who would act as an oversight body. In contrast, the proposed amendment gave power to the Chief Executive, who was appointed by the CPG, to make the decision of transfer. In particular, the government cited the case of Chan Tong Kai, a Hong Kong resident who killed his girlfriend in Taiwan. Due to the lack of extradition treaty between Hong Kong and Taiwan, Chan could not be prosecuted for murder in Taiwan, but only on money laundering charges in Hong Kong. While the government cited public safety as their motivation, the Hong Kong population rejected this justification and began protesting.

By early June, one million protestors took to the streets to oppose the bill and on June 12, a group stormed the legislative assembly so that it could not be considered. They demanded that the government withdraw the amendment. On June 16, two million protested on the streets again, and damaged businesses perceived as pro-government. More recently, protests have escalated to the thrashing of MTR stations (the public transportation in Hong Kong), to throwing bricks and Molotov cocktails. Eleven universities were suspended as tear gas was thrown.  The government has also brought in a ban on facemasks, a law with roots stemming from an old colonial law, so that protestors would not be able to use gas masks as defense.

Mr. Blanchflower reports that despite the dominance of violent protests in the media, there is a large segment of peaceful protestors of various interests including pro-government groups. Anti-government protestors are splinters of various groups and individuals, moving like water across the city.

While there is no identifiable leader who can enter into negotiations with the government, the Hong Kong protestors have 5 demands: (1) withdrawal of the Extradition Bill; (2) revoking the label of protestors as rioters; (3) amnesty for arrested persons (which at the date of the talk numbers 3,300); (4) a public judicial inquiry into police brutality and (5) universal suffrage. The extradition bill was withdrawn on October, but the government shows no interest in acceding to the remaining demands. In regards to demand (4), there is already an independent police inquiry body, but the public does not trust it because it consists of government appointees. As well, demand (5) is particularly difficult, since to allow one vote per person in Hong Kong, but not mainland China, would spark internal unrest.

According to Mr. Blanchflower, Hong Kong society has become fractured. Disagreements have separated families, workplaces and friends. There is no trust or respect for the government and the police. However, Hong Kong has held onto the rule of law. The courts remain independent and strong. Recently, a high court judge stated that “I will not be influenced by anyone”. Moreover, with the recent appointment of the Right Honourable Beverley McLachlin as a non-permanent member to the Court of Final Appeal, there is continual hope for fair adjudication. Ultimately, while the executive and the legislature may be in trouble, the judicial arm remains affirmed: the glue that holds Hong Kong together is faith in the rule of law.