In the last post I discussed how I have come to learn about the different kinds of MOOCs through my participation in etmooc. I also said that through learning about a new kind of MOOC, the cMOOC or “network-based” MOOC, I was reconsidering my earlier concerns with MOOCs. Might the cMOOC do better for humanities than the xMOOC? 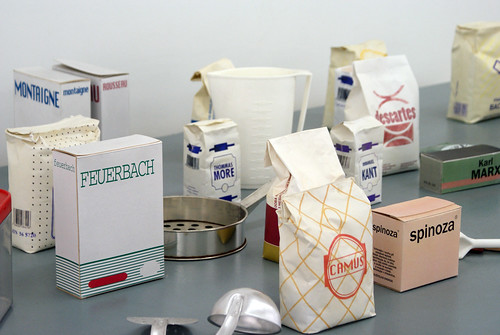 Would this sort of structure be more likely to allow for teaching and practice of critical thinking, reading and writing skills, as I discussed in my earlier criticism of MOOCs (which was pretty much a criticism of xMOOCs)? I suppose it depends on what is discussed in the presentations, in part. The instructors/facilitators could model critical reading and thinking, through explaining how they are interpreting texts and pointing out potential criticisms with the arguments. They could talk about recognizing, criticizing, and creating arguments so that participants could be encouraged to present their own arguments in blogs as clearly and strongly as possible, as well as offering constructive criticisms of works being read–as well as each others’ arguments (though the latter has to be undertaken carefully, just as it is in a face to face course).

This would involve, effectively, peer feedback on participants’ written work. Rough guidelines for blog posts (at least some of them) could be given, so that in addition to reflective pieces (which are very important!) there could also be some blog posts that are focused on criticizing arguments in the texts, some on creating one’s own arguments about what’s being discussed, etc.

What you wouldn’t be able to do well with this structure are writing assignments in the form of argumentative essays. These take a long time to learn how to do well, and ideally should have more direct instructor/facilitator feedback rather than only peer feedback, in my view. Peer feedback is important too, but could lead to problems being perpetuated if the participants in a peer group share misconceptions.

Another thing you can’t do well with a cMOOC is require that everyone learn and be assessed on a particular set of facts, or content. A cMOOC is better for creating connections between people so that they can pursue their own interests, what they want to focus on. Each person’s path through a cMOOC can be very different. Thus, as noted in my previous post, there is not a common set of learning objectives; rather, participants decide what they want to get out of the course and focus on that.

One would need to have a certain critical mass of dedicated and engaged participants for this to work. If it’s a free and open course, then people will participate when they can, and can flit in and out of the topics as their time and interest allows. That’s fantastic, I think, though if there are few participants that might mean that for some sections of the course little is happening. So having a decent sized participant base is important. (How many? No idea.)

I envision this sort of possibility as a non-credit course for people who want to learn something about philosophy and discuss it with others. Why not give credit? There would have to be more focus on content and/or more formal assessments, I think (at least in the current climate of higher education).

A cMOOC as supplement to an on-campus course

Even if a full cMOOC course in philosophy or another humanities subject may not work, I can see a kind of cMOOC component to philosophy courses, or Arts One. In addition to the campus-based, in-person course, one could have an open course going alongside it. This is what ds106 is like. One could have readings and lectures posted online (or at least, links to buy the books if the readings aren’t readily available online), and then have a platform for students who are off campus to engage in a cMOOC kind of way.

Then, those off campus can participate in the course through their blog posts and discussions/resource sharing on the other platforms, like we do in etmooc. Discussion questions used in class could be posted for all online participants.  Students who are on campus could be blogging and tweeting and discussing with others outside the course as well as inside the course. Frontispiece to Mary Shelley’s Frankenstein (1831),by Theodor von Holst [Public domain], via Wikimedia Commons. One of the texts on Arts One Digital.

Discussions would expand to include many more people with many more backgrounds and things to contribute, which is likely to enrich the learning experience. There might get to be too much for each individual to follow, but then one just has to learn to pick and choose what to read and comment on (more on this, below). All participants could make connections and continue discussions beyond the course itself.

Arts One has already started to move in this direction, with a new initiative called Arts One Digital. So far, there are some lectures posted, links to some online versions of texts, twitter feed, and blog posts. This is a work in progress, and we’re still figuring out where it should go. I think extending the Arts One course in the way described above might be a good idea.

Again, the main problem with this idea (beyond the fact that yes, it will require more personnel to design and run the off-campus version of the course) is getting a high number of participants. It won’t work well if there aren’t very many people involved–a critical mass is needed to allow people to find others they want to connect with in smaller groups, to engage in deeper discussions, to help build their own personal learning network.

Looking back at previous concerns with (x)MOOCs

Besides general worried about their ability to help students develop critical skills, I was also concerned in my earlier post with the following:

Can a cMOOC address these concerns?

cMOOCs in humanities–what’s not to love?

What other problems might there be with trying to do a cMOOC in humanities, whether on its own or as a supplement to another course? Or, do you love the idea? Let us know in the comments.

UPDATE: I just found, in that wonderfully synergistic way that etmooc seems to work, this blog post by Joe Dillon, which explains how well a cMOOC like etmooc stacks up to a face to face course. It’s just one example, but it can provoke some further thought on whether a cMOOC for humanities might be a good thing.

MOOCs and humanities, revisited / You're the Teacher by Christina Hendricks is licensed under a Creative Commons Attribution 4.0 CC BY