What was the Judgement of Thamus?

Commentary 1: What was The Judgement of Thamus? 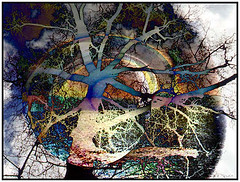 Neil Postman begins his book Technopoly: The surrender of culture to technology with the Judgment of Thamus in order to elucidate “several sound principles” (p. 4) to guide his thinking on the critique of the technology of writing and its current transformations as modern science and technology, and its condemnation by Thamus .

The challenges of interpreting Plato’s work, at the borderline between the ancient Greek oral culture and the rise of writing, are immense. Derrida’s Dissemination, an in depth analysis of the Phaedrus, opposes the historical attitude: “We are speaking of the Phaedrus that was obliged to wait almost twenty-five centuries before anyone gave up the idea that it was a badly composed dialogue” (Derrida, 1981, p. 66, 67; Ong, 1982, p. 104). Central to Derrida’s analysis is an archeology of the word “pharmakon“, which is used many times in the dialogue with respect to writing. Theuth himself calls his invention of writing a ‘pharmakon’:

Thamus dismisses Theuth’s recipe for memory and wisdom, which will have precisely the opposite effect from what he intends:

Those who acquire it will cease to exercise their memory and become forgetful; they will rely on writing to bring things to their remembrance by external signs instead of by their own internal resources. What you have discovered is a receipt (pharmakon) for recollection not for memory. (275b; Postman, 1968, p. 4)

Phaedrus, who is carrying a written copy of Lysias’ speech under his cloak, chides Socrates for never leaving town to walk in the country, and Socrates replies:

Shades of meaning range from a drug or medicine, remedy, a recipe (receipt), or poison. For Derrida the multiple meanings of this word are crucial to the understanding of what the dialogue is really saying about the “propriety or impropriety of writing” (274b). Different translators opt to translate this pivotal word – like any word – in different ways depending on their reading of the context. Derrida’s point is that the intrusion of the conceptual framework of the translators inescapably alters the meaning of the text, and often hides, destroys, or disguises the multiple associations that must be read in each instance (p. 72). Before any discussion, the ‘pharmakon’ embodies an oppositional dialectic of positive and negative powers and impacts, suggesting that Thamus is not only aware of the ambiguous nature of writing, but demonstrates the slippery nature of the technology itself through a written critique of writing, embedded in a myth that Socrates had heard (Derrida, 1968, p.70).

It seems unlikely then that Thamus, in his wisdom, fails to recognize the positive powers of writing as Postman suggests, and that we need to learn “that it is a mistake to suppose that any technological innovation has a one-sided effect” (p.4) . Most scholars would acknowledge this (Eisenstein, 1979; Chandler, 1995; Ellul, 1964; Heidegger, 1977). Even McLuhan (1969), who had a generally dystopic view of the impact of modern technology, had a vision of the ‘global society’ with evolutionary potential: “The content or message of any particular medium has about as much importance as the stencilling on the casing of an atomic bomb. But the ability to perceive media-induced extensions of man, once the province of the artist, is now being expanded as the new environment of electric information makes possible a new degree of perception and critical awareness by non-artists.” He makes it quite clear that it is the technology itself that is the danger.

Postman suggests that Thamus assumes that “writing is not a neutral technology whose good or harm depends on the uses made of it” (p.7; see Chandler, 1995, pp 9-12). This was McLuhan`s central point. Postman feels it is his role to bring the dangerous powers of the ‘pharmakon’ into general awareness: “The changes wrought by technology are subtle if not downright mysterious, one might say even wildly unpredictable. Among the most unpredictable are those that might be labeled ideological.” (p.12) Most often these effects are understood after the fact. This is a focus of Heidegger`s attempt to understand the essence of technology; and like Derrida he undertakes an archeology of the roots of the word techne – technology (Heidegger, 1977, p.17).

Our technologies have effectively been assimilated within our conceptual and perceptual frameworks. If writing is a pharmakon, since it swings in its “overdetermination” (Derrida, p. 71) between remedy and poison, the effects will follow its introduction into the body politic. Following the medical analogy, whether it ends up as remedy or poison (or both) depends on a complex of factors that Postman calls ‘ecological’ in their complexity – from elite power structures, to changes in meaning, values and language, to the calculations, efficiency and commodification that characterize the ‘technopoly’ of modern society, where the “the benefits and deficits of a new technology are not distributed equally” (p. 9). Although not explicit in the Thamus myth, the whole question of ethics around rhetoric and writing earlier in the Phaedrus must be reflected here as well. The dialogues considers the “propriety and impropriety of writing“ which brings to mind:

And as for wisdom, your pupils will have the reputation for it without the reality: they will receive a quantity of information without proper instruction, and in consequence be thought very knowledgeable when they are for the most part quite ignorant. And because they are filled with the conceit of wisdom they will be a burden to society. (275a,b)

I suspect, as Postman suggests, the meanings of the words `wisdom` and `memory“ today bear little resemblance to their Greek origins. The Judgement of Thamus may remain inaccessible to us if we cannot access memory and wisdom ourselves. What does this mean for education? Postman clearly feels that the wrong questions are being asked about the best uses of technology in the classrooms. He asks the fundamental question – what does it mean to be educated in this society? (p.188). His contention is that there is no moral centre; there is a war on for the minds of students… the conflict between the old world of writing and print and the multimedia world of ”simultaneity, intimacy, immediate gratification” (p.16). McLuhan said years ago that the educational system is obsolete, oriented to past values and technologies, but that there is potential for new educational worlds – a “psychic communal integration made possible at last by the electronic media” – a world consciousness. We can see shimmerings of this in collaborative projects, the Arab Spring, and Wikipedia – “Print centralizes socially and fragments psychically, whereas the electric media bring man together in a tribal village that is a rich and creative mix”. Would Thamus exempt this latest transformation of the technology of writing from the effects of the pharmakon?

Ong, W. (1982.) Orality and literacy: The technologizing of the word. London: Methuen.

1 Response to What was the Judgement of Thamus?