every reception of a work of art is both an interpretation and a performance of it, because in every reception the work takes on a fresh perspective for itself.
Umberto Eco – The Open Work

What lies ‘beyond’ representation would thus be found ‘within’ it…representation as a process rather than object/action…representation understood as relationship (dynamic/active)… suggests an inherently unstable, reversible and dialectical structure…working through contradiction interminably
W.J.T. Mitchell – Picture Theory

Bolter’s (2011) contention that hypertext is the remediation of print opens up the dialectical process of reading of any text. The word EKPHRASIS itself functions as both text and image, hypertext link, a window into a history of rhetoric extending back to Plato and Aristotle, and opening into contemporary literary criticism, and a vast literature on the verbal and visual arts of representation, that is, between image and text –the ongoing negotiation and “readjustment of the ratio between text and image in the various forms of print” and in the spaces of new digital multimedia (p. 48).

As a traditional rhetorical figure, ekphrasis was the verbal representation of a visual representation, real or imagined – the final exercise for Greek students to capture powerful emotional and imaginative experiences for their listeners, with vivid and energetic verbal (and oral) descriptions in the service of their arguments. In contemporary usage the term is widely applied to any descriptive work in any medium – be it film, prose, poetry, photography or film that uses ‘rhetorical vividness’ to explore implications or understanding in any visual art. The earliest cited example of ekphrasis is the detailed description of Achilles Shield in Homer’s Illiad (see W.J.T. Mitchell, 1994); and in Literary Criticism there are many examples put forward, including Rilke’s poem on The Archaic Torso of Apollo. 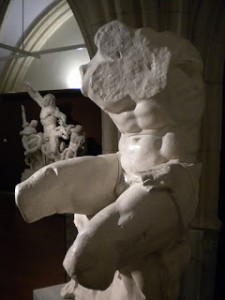 the torso of Apollo in the Louvre

We have no idea what his fantastic head
was like, where the eyeballs were slowly swelling. But
his body now is glowing like a gas lamp,
whose inner eyes, only turned down a little,

hold their flame, shine. If there weren’t light, the curve
of the breast wouldn’t blind you, and in the swerve
of the thighs a smile wouldn’t keep on going
toward the place where the seeds are.

If there weren’t light, this stone would look cut off
where it drops so clearly from the shoulders,
its skin wouldn’t gleam like the fur of a wild animal,

and the body wouldn’t send out light from every edge
as a star does…for there is no place at all
that isn’t looking at you. You must change your life.

The poem well illustrates that literary ekphrasis is not a mere visual description – but an evocation of a profound experience. A more contemporary example is seen in Oscar Wilde’s The Picture of Dorian Gray, where the described transformations of the painting reflect the moral disintegration of the character; which has been brilliantly remediated in the 1945 film directed by Albert Lewin, the BBC production, and by Oliver Parker in 2009.

Bolter links the idea of the GUI as a “window metaphor” directly to Plato’s statement in the Phaedrus that writing is strangely like painting (275d). Indeed, given the structure of hypertext, the window into another world is not metaphorical, but actual. As to the similarity between painting and writing, Mitchell (1994) suggests that ekphrasis is impossible from a common sense point of view: “A verbal representation cannot represent – that is, make present – its object in the same way a visual representation can. It may refer to an object, describe it, invoke it, but it can never bring its visual presence before us in the way pictures do. Words can “cite,” but never “sight” their objects” (par. 2).

And yet people have been reading novels and poetry for years without the advantage of appended visuals to explain or expand the text. The reader gets lost in the text and lives, visualizes, feels, and hears the world being evoked through the text. Is this why so many people prefer the book to the film? Text has always had the ability to evoke and conjure imaginative worlds and images. Bolter points out what he calls the “visualized rhetoric” of advertising and newspaper headlines that call up related or latent images and metaphors, and the ‘reverse ekphrasis’ where the image models the metaphor – “the bigger piece of the pie” – to explain the text (p. 54-56). His use of language suggests this remediation is energetic, competitive and aggressive – ‘straining’, ‘rival’, ‘enthusiasm’, ‘apprehension’, ‘controlled’ and ‘supervised’ – until the ‘images break free of the constraints of words!’(p. 58)

The anthropomorphisms are interesting in light of Mitchell’s analysis of the of the social/political power relations inherent in the text-image/self-other dialectic that he traces into the realm of logocentric desire, and the ‘ekphrastic fear’ of transgressing the boundaries that have been set “between the senses, modes of representation, and the objects proper to each” (par. 6). For Mitchell, these semiotic and metaphysical boundaries are bridged through ekphrasis: “The estrangement of the image/text division is overcome, and a sutured, synthetic form, a verbal icon or imagetext, arises in its place” (par. 4).

The oscillation or dialectic that Bolter envisages between image and text is brought under a “universal principle of poetics” (p.12), where it is acknowledged that the textual arts – any description – can bring something before the “mind’s eye” and manifest what Kreiger calls the “physical solidity of the medium of the spatial arts” (par.10), and conversely, as Bolter says, in the visual arts, the “picture elements extend over a broad range of verbal meanings: each element means too much rather than too little” (p. 59). If Mitchell is right, then ekphrasis ceases to be a special rhetorical device and “begins to seem paradigmatic of a fundamental legacy in all linguistic expression” (par. 4).

It could be argued that Krieger and Mitchell have eliminated any meaningful distinctions that could contribute to an understanding of how text is being remediated by hypertext and the image. However, because the verbal icon or the imagetext is tied to the religious icon as a locus of operational power and symbolic meaning (Bolter, p. 62) there is an opening to explore how the text and image remediate each other as the digital space of the text tries “to remediate the image into discursive meaning, while the image was insisting on the formal significance of the word itself as image” (p.64) – a good place to return to EKPHRASIS.

Mitchell, W. J. T. (1994). Ekphrasis and the Other in Picture Theory. Chicago, IL: The University of Chicago Press. Retrieved from:
http://www.rc.umd.edu/editions/shelley/medusa/mitchell.html#fiftn

Notes:
The definition of ekphrasis as “the verbal representation of visual representation is also the basis for James Heffernan’s article, “Ekphrasis and Representation,” New Literary History 22, no. 2 (Spring 1991): 297-316, cited in Mitchell, 1994.