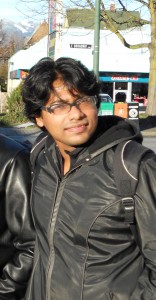 Hello everyone! My name is Anupam Biswas and I am a new graduate student in Mechanical Engineering Department. I graduated from the Department of Aerospace Engineering in the Indian Institute of Technology, Kharagpur, India. And now, here I am in Vancouver, Canada, for the first time outside my country, pursuing my master’s in Mech, UBC. I arrived here on September 2nd, 2010 after completing 35 hours of flight but I soon realized that I wouldn’t really hesitate to make 500 hours of continuous journey to be in British Columbia, as it is, no doubt, one of the ‘The Best Places on Earth’.

As I am from India, I have always been in multicultural milieu, wherever I have been there. And now here in UBC, it is a delight to be amidst people from different parts of the world. Living here, kind of feels like being a global citizen. In my opinion, to be a part of the student community here in UBC is, besides academics, a great opportunity to learn about other cultures and communities of the world.

I was being told to blog from a really long time, not because I am a great blogger or a page 3 columnist or something :), but simply because I had consented to the idea of blogging and was constantly procrastinating. My apologies for that. Better late than never. I will certainly not justify myself for this delay but I will surely talk about MECH 502 :). Well that is a fluid mechanics course taught by Dr. Ian Frigaard. If one is interested in fluid mechanics, wants to expand his or her knowledge in the area and doesn’t really mind giving the brain a hard time for around four months, this course is a ‘must take’ :). And not taking it is a mistake :), though one has to go through excruciating hours while solving the assignments, for which the deadlines are usually a month after the question sheets are provided. I am sure those who have taken this course already and are reading this blog, are nodding inside their heads. That is why it was so difficult to begin anything else, because all the time, that is, even hours after the lecture, there were always certain words revolving around the centre of the mind, like Reynolds number, Stokes number, Hele-Shaw, squeeze-damper, thin films and many more. But believe me, at the end you are always content of having learnt so much in the course.

Well life in UBC is so full of things. It is difficult to keep oneself without anything to do. I believe it is like ‘once in a lifetime’ opportunity to learn so much, and in a myriad of domains. As far as graduate student life is concerned, I think these two or three years of life, keeps one involved and occupied in lab-work for long hours besides gathering extensive amounts of scientific knowhow. I’m sure the idea of getting a sleeping bag for ones’ office is not really a novel one :). I have no doubt that life in UBC for everyone is a grand and unforgettable experience.

Thank you! You can reach me at anupambiswas85@gmail.com. Frankly I don’t like the ‘interchange’ in Mech emails, so I don’t use it.