Hey guys….
So… I was at a conference all of last week, and missed the gloomy weather of Vancouver while I was gone. But believe it or not, I actually like Vancouver better than San Francisco, where the conference was held. I didn’t take too many pictures, as I didn’t even bring a camera. But when I got back from the conference, I had to take a picture of my desk, and the mess I had created as my usual post-conference ritual.
What is this ritual? Well, it’s sorting out receipts from the entire week of being gone. Sometimes it feels like going to a conference presses a pause button on your life. But it really doesn’t work that way. While you are gone, you still have to sleep, ride, walk, see and eat. So I had to do all those things too. That also meant that I have receipts from all those activities I did during the conference, which means I must’ve spent money, which means I need to file an reimbursement form to get the money back.
So detailed notes on filling out the form aside, I pretty much ended up with this kind of a desk space in order to tape together and organize the paperwork, that is so necessary for all conference goers. 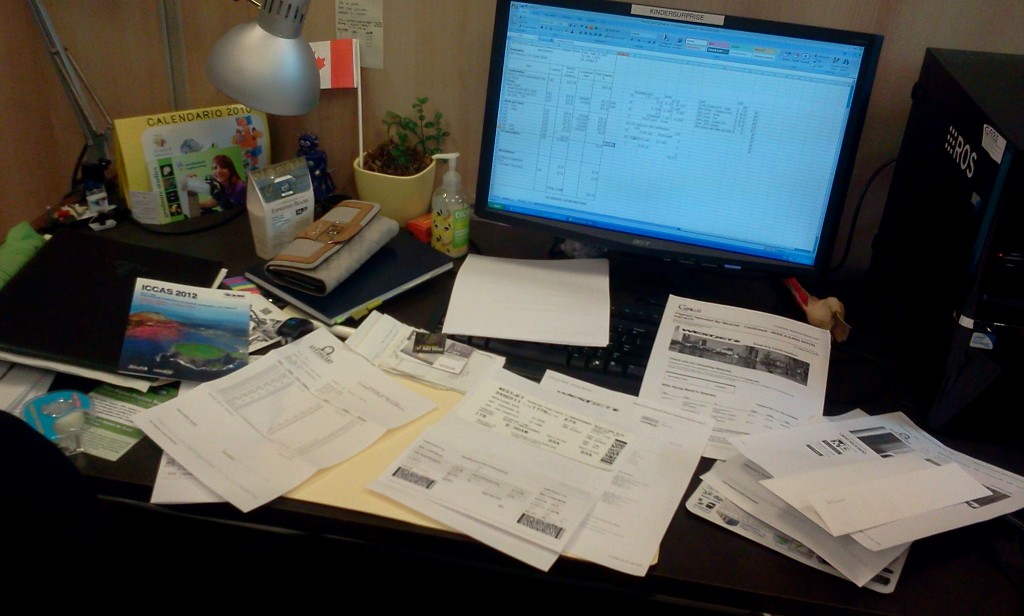 You probably noticed already that I tend to blog more frequently when I don’t want to do work. Yes… it’s true…

I felt a bit productive last night, but didn’t want to do the ‘real’ work, so I ended up writing a huge post.

And then I realized that I actually wanted to post a few photos from the conference. The conference I went to last week (ACM CHI Conference on Human Factors in Computing Systems) was held in Vancouver, at the fabulous Vancouver Convention Centre.

Since it was a conference highly connected to social media, and things online, there was  a lot of comments on twitter amongst the delegates regarding the weather, the venue, and the city. It was quite sunny the first day (Monday), but did eventually rain during the conference, resulting in a thread of posts regarding umbrella uses at the conference. Quite cute I must say.

This is a picture from inside the convention centre by the way, which was a reply to the previous post by someone else:

Anywho, I am really glad that there’s such a great venue in Vancouver. It makes me feel good when welcoming people, and also makes it easy to attend conference because some of them are local. I mean, this is the second conference I’ve been to that was held in Vancouver, and I am glad to have been to both of them (quite easily so, due to the substantially lower cost of travel in attending them). And I don’t really mind the rain as much, because it’s a good conversation starter with people who are new in town, and I’ve grown to enjoy the mugginess in a cheery way…

People told me waaaay back in undergrad that, “As you get older, it gets harder to find good friends.”

I wasn’t sure what to think of this when I first had this conversation with, ironically, my friends. I didn’t really have a lot of friends back in high school, so I didn’t feel I lost a lot of friends coming into university. I did feel friendships and contacts fade away between me and my friends from Korea (elementary school friends, middle school friends, etc). But that seemed inevitable given the circumstances: I had moved to Canada, and the idea of sending email was still pretty new back then — which made intercontinental communications a lot harder for teenagers.

During undergrad, making friends didn’t seem that much of a challenge. A girl in a Canadian engineering program means that there is a high probability of your classmates wanting to initiate conversations with you, rather than needing you to take the initiative yourself. From my experience, that’s because most of your classmates are guys who see a very small percentage of female population in their classes everyday, and also because the small number of female engineering students do like to get to know other female students within the male dominated classroom. As an originally timid and introverted individual (yes, I know that some of you may not be able to imagine this), being in such an environment provided me with plenty of opportunities to get out there and be a bit more extroverted. It also made me want to fight for the status of female engineers as highly capable individuals within the program, and motivated me to work harder. So, friends were not much of an issue during undergrad.

But things did change when I entered the master’s program.

At first, I didn’t think that I would ever get into a master’s program. Not (only) because of what I thought about my technical abilities, but because I didn’t see myself as an academic. To me, getting a graduate degree seemed to mean a) that the gal/guy is super smart (i.e., natural intimidation factor is at play), and b) that I’d better be careful not to let them figure out how small of an engineering knowledge I have. When I began my master’s and met a few people who are doing their master’s/phD, my perspective on that changed.

I learned that grad students are not the super smart geniuses subject to avoidance. They are all… simply… people. Really nice and interesting people in fact, who have an extensive amount of knowledge in what they do (hopefully), but doesn’t know everything about everything. That gave me a relief, and I felt a more comfortable at the daunting quest for new knowledge that I had signed up to do. But I also learned that they are very… VERY busy people! It’s hard to get to know people when they’re so busy all the time (I am guilty of this myself I think).

Now, let me sidetrack here a little bit and mention that I did meet many people who pretend to know everything about everything. And in many encounters I’ve had with them, I naively thought that they were very much real. I thought that they do indeed have a wealth of knowledge that I haven’t been able to digest due to the inferior processing power (my brain) on my motherboard (a unique sleep-needing hardware model from the late 80’s). But as I found myself in many intellectually charged conversations between academicians, I began to see that there were nothing magical about them. It was just that some people choose to go for depth of knowledge, while others go for breadth. It was always a case of depth vs. breadth relationship, a trade-off, rather than depth AND breadth. It just so happened that people who cover a large breadth dazzled me into thinking “they must know a great deal about all of the things they spoke of!”

Since then, I began to lend a more critical eye to someone who makes a bold statement about a field, pretends to really know about something, or claims to be an expert in a field. As soon as someone gets categorized as ‘pretentious’ via frequent uses of unsubstantiated statements, I went to my frequently visited “I don’t want to waste my time on this person” mode — it’s a pretty terrible attitude to have, I think, but also hard to fix.

So, not only is making friends during grad school hard because everyone’s so busy, but it’s hard also because a lot of people don’t become friends in the first place due to quick judgements people (at least I) make on people.

I struggled a little bit on this point of knowledge-based prejudgement of people, actually.

As a person who has interdisciplinary interests, and is involved in a interdisciplinary thesis project, I strive to maximize the depth and breadth of my knowledge within the field of roboethics an human-robot interaction. I always want to know more, and be up to date on everything. With time and my body imposing limits on my daily knowledge absorption rate, and I felt like a hypocrite shunning people who pretends to know more than they actually know. I mean, chances are, they are probably suffering from the same challenge of having to be on top of their respective rapidly changing field… Am I not one of them?

Bill Buxton, a Canadian computer scientist and a Principal researcher at Microsoft Research, had an exhibition of his collection of interactive devices at the conference. He tirelessly told stories after stories linked to each of the devices in the exhibit, and also jazzed up his tour of the exhibit with the lessons he learned throughout his career as a designer.

Bill Buxton at some event

While telling one of his stories, he spoke about the importance of having the ‘T type’ people in a team — the type of people who has a general breadth of knowledge of the field (the horizontal line across the letter ‘T’), but knows a great deal (depth) about one particular thing (symbolized by the vertical line of the letter). And he also spoke about his 360 rule, which is that he never hires someone who thinks or pretends to know the full 360 degrees about something. He told us this to explain how knowing where your blind-spot is, and admitting with honesty that you do have a blind-spot are very important qualities of a good person to work with (whom I take it to be a researcher), and how knowing such people helped him get to where he is now.

First, I realize that I have to find a better balance, and create a prettier looking letter ‘T’ in terms of my knowledge breadth/depth.

Second, I realized that people really count. I mean, the difference in knowledge between people who admit that they have blind-spots and people who don’t, may not be very big. But in terms of their attitudes, there is a huge difference. And I feel so lucky to know the friends who are of the first type, who make my life so easy and enjoyable just being friends with them. The trusting relationship I had built over time with these amazing people is something very valuable, partially because there are lots of people in the world who claims to know the 360 degrees… I mean, look at me, making these statements as if I really know and have seen all there is to see!

Anyway, a long and fluffy post after returning from the conference… I should really take care of the unread messages in my inbox…