Understanding text and its depreciation

Text surrounds us, in many different forms and spaces. I would argue that text, as part of our language, has become the victim of improper usage and depreciated in value over the years of its transformation. Once an elegant delivery of art, as evidenced by the infamous author T.S. Elliot, has been rapidly replaced by “lol “and “l8r”, typed at warp speed by teenage and adults alike. Like Postman, I always conceptualized text as something formal, either found in textbooks or letter writing as a child, to be taken as the truth (Postman, 1992). As I grew up, I learned that text can be changed, manipulated and delivered in many different medias. My use of formal letter writing became the informal short messages of MSN. My next level of transformation took place in form of the cell phone, where we could text one another through SMS. Now, as I write this response, I have been so empowered by technology that I am texting who is available to go out for dinner tonight.

What I find most disconcerting is our current use of emoticons in these text messaging systems. Popularized by social culture, it is replacing language as a whole in order to get our feelings out. As Vosloo mentions, we are in fear of our language under assault (Vosloo, 2009, p 2). I would argue we are at war with these emoticons, trying to trample our written language of “elated with joy” into a simple representation of “:D”. These emoticons are the bane of our existence. Patterson suggests that emoticons affect the way we communicate in a written format, changing our writing style unfathomable to older generations. Our ability to construct meaningful sentences cannot give in to the visually enticing pictorial characters. In fact, I am largely curious in understanding the full extent in how these emoticons affect our way of written communication. Perhaps, should this trend of emoticons to continue, I prefer we go back into the earliest style of text, Egyptian calligraphy, to represent our true feelings. 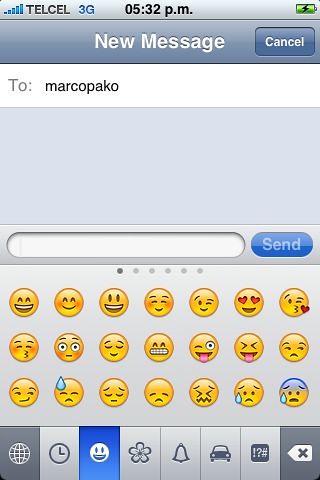 Vosloo, S. (2009). The effects of texting on literacy: Modern scourge or opportunity? In an issue paper from the Shuttleworth Foundation.

7 Responses to Understanding text and its depreciation