The printing press and religion: A study in reciprocity

Impelled by “social, economic and political demands” (Feather, 1986, p. 16), Johannes Gutenburg adapted existing technology (Jennett, 1958) to invent the moveable type printing press, transforming the way books were produced. By the beginning of the sixteenth century, printing presses had been established in every key town in Europe (Eisenstein, 1979).  Modern historians, (as well as contemporaries of Gutenburg) have hailed the invention as a “revolutionary innovation” (Dittmar, p. 1135), “an epoch-making event” (Eisenstein, 1969, p. 19), and “God’s highest and extremest act of grace” (Luther as cited in Loach, 1986, p. 135). Although printing did not immediately change the physical form of the book (Bolter, 2011; Boreau et al., 1989; Eisenstein, 1970), Gilmore (as cited in Eisenstein, 1970) remarks that it impacted “every department of human activity” (p. 736). For the purpose of this paper, I will focus on the “department” of religion during the transitional years (1300-1600) from scribal to print culture (Eisenstein, 1969), although it is recognized that this short paper can only act as a broad survey rather than an in-depth examination. 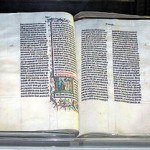 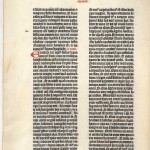 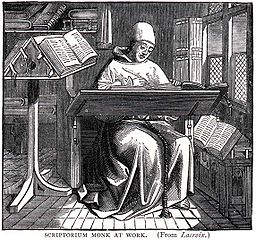 In order to recognize and compare changes, one must first look to the past (Eisenstein, 1970).  Until the advent of printing, books took on the form of codex manuscript, painstakingly copied by monks secluded in scriptoria. Literacy was primarily the purview of the upper class with content and availability stringently controlled by the church (Keep, McLaughlin, and Parmar, 1993-2001). The emergence of university centers in the twelfth century precipitated a move away from monastery scriptoria to university copying houses in order to keep up with the demand for books (Febvre & Martin, 1976; Raven, 2008). To facilitate speed of production, books were broken into quires (sections), in an efficiently organized pecia (loan) system.  Separate sections were rented out upon request without tying up a single book in one location. According to Eisenstein (1979) however, by the early fifteenth century scribal culture was enjoying a revival and this practice had subsided due to “anarchic” conditions (p. 14).

Lessons in Penitance to be read by the masses in the Cathedral. Public Domain

On the eve of print, only the Roman Catholic Church existed in Western Europe. The Bible, available in Latin,was hand-copied, owned, and strictly controlled by the church. A sharp dichotomy existed between clergy and laypersons. The illiterate masses were expected to access the Bible, and knowledge through priests, and by “reading” the art and icons housed within the cathedrals (Bolter, 2011, p. 1). Universities, largely controlled by the church, followed the ecclesiastically approved learning domains: “liberal arts, theology, medicine and law” (Bazerman, 2012, p. 25). Existing texts were predominantly religious and written in Latin (Febvre & Martin, 1976). Reformers such as Martin Luther were beginning to criticize the church calling for change in the way religion was understood and controlled. Vernacular handwritten versions of the Bible began to appear, and the Church stepped up control through bans, and book burning (Newman, 1985, p. 97).

The Church’s Response to Print

The Catholic Church welcomed the age of print, considering it a “divine art” (Loach, 1986, p. 135). Papal bull 1515 declared printing “uniquely advantageous ‘to extending the glory of God, to the increase of the faith, and the diffusion of the arts and sciences’ (as cited in Loach, 1986, pg. 135). The church readily adopted the new technology for its own purposes, producing leaflets to garnish support for an anti Turkish campaign (Eisenstein, 1979), and materials to instruct and help clergy in their care of the laity (Loach, 1986).

The Church, believing in its divine right to “guide, discipline, and control,” (Newman, 1985, p. 104) was agreeable to the distribution of approved printed texts. Marian authorities considered only educated priests capable of teaching the congregation (Loach, 1986) and consequently most of the works were aimed at clergy.  However, the advent of printing generated a plethora of unapproved vernacular texts.  Of particular concern was the direct access that the masses now had to the Bible in their own language, which was considered “casting pearls before swine” (Loach, 1986, p. 138).  Jesuit Edmond Auger (as cited in Raven, 2008) declared that, “God does not want to declare his secrets to a bunch of menu people” (p. 229). However, printing did not cause the problem; rather it empowered a movement (the Reformation) that was already developing. The circulation of vernacular texts, and particularly the Bible, had already begun before the advent of the press (Eisenstein, 1979).  Gutenburg was driven by his belief that the church’s binding hold on the Word grieved God. His invention then would “break the seal” by offering a machine that didn’t tire like copyists, and cut down on production cost (as cited in Grey, 2009, para. 6).

Protestantism and the Reformation

The start of the Reformation is generally attributed to Martin Luther (Gilmont, 1990). He sharply criticized the established church, calling for an understanding of salvation through grace rather than by works imposed by the church. This understanding would come, he believed, when the common man gained personal access to the Bible (Dittmar, 2011, p. 1161). His famous 95 theses posted in 1517 and written in Latin, were not unique for his time. Handwritten propaganda against the Pope had appeared before printing, but always with limited and short-lived effect (Eisenstein, 1979). What was unusual was the speed with which his ideas were disseminated, first in German and then in other vernacular languages, made possible by the press (Dittmar, 2011; Eisenstein, 1970). The success of the Reformation (1517-1648) has commonly been attributed to the printing press, and its ability to diffuse information and ideas (Dittmar, 2011). Eisenstein (1979) views printing as both a “precondition” and a “precipitant” of the Reformation (p. 310). However, what she fails to recognize is reciprocity at work here. “Religious sentiment” (Dittmar, 2011, p. 1161) already percolating, fostered a demand for print. Affordable religious and humanist works, along with Protestant calls for personal study of scripture both advanced literacy and created new “norms favoring exchange of ideas” (Dittmar, 2011, p. 1137). The religious pressures of the day created a ripe environment for the invention and success of the printing press.

The church responded by commissioning a council of translators to produce a new credible Catholic translation of the Bible. George of Saxony banned the printing, selling, and purchase of Luther’s Bible in his district (Raven, 2008), and contraband books were at times burned. Furthermore, the Church introduced the practice of adding fixed illustrations (Boureau et al., 1989; Raven, 2008) to printed texts in in a bid to impede the radical movement from “image” to “word culture” (Eisenstein, 1979, p. 67), and to control the interpretation of the common man. They could not however arrest the swelling movement.

Postman (2008) states that “all technological change is a trade-off, a “Faustian bargain” (para. 4). Catholics and the Protestants both embraced the printing press as a tool, expedient for their respective uses. However there was a cost to this new technology. Eisenstein (1969), speaking of printing, states, “it arrested textual corruption fixed texts more permanently, and enabled them to accumulate at an accelerated rate” (p. 24). While fixity and acceleration seem evident, there is suggestion of an upsurge in textual corruption (Raven, 2008).  The printing press generated fast production but inaccurate copies, and printers were described as “hasty, negligent, and above all interested in profit (Raven, 2008, p. 229). This was of particular concern to both Church and Reformers alike. Erasmus (as cited in Raven, 2008) complained of religious works being published by greedy men “so ill educated that they couldn’t even read (p. 110).  After a hasty printing of his New Testament followed by pirated editions, Luther bemoaned the fact that he didn’t even recognize his own work (Newman, 1985, p. 110). In response, the Abbot of Sponheim urged monks to continue hand-copying in order to preserve error free texts (Eisenstein, 1979; Raven, 2008).  Issues of authorship, plagiarism and textual corruption along with a move toward viewing texts as individual works would eventually lead to the passing of the first copyright law in 1710 (Feather, 1986).

Eisenstein (1970) implies that a study of the effects of printing will lead to an understanding of “the main forces that have shaped the modern mind” (p.734). This paper has shown that the printing press did contribute to the breaking of the power and authority of the religious institution of the day. It increased literacy and made possible through the dissemination of vernacular texts, personal devotion and understanding of Scripture, which is the predominant way of thinking of most Christians today. Print also contributed, through the agency of the Reformation, to new exchanges of ideas, which though treasured by today’s world, were uncommon at the time. However, as has been discussed, the printing press was not fully responsible for these changes, as it was invented in response to demand and, in turn, facilitated those demands.

Bazerman, C. (2011). Church, state, university, and the printing press: Conditions for the emergence and maintenance of autonomy of scientific publication in Europe. Languages of Science in the Eighteenth Century, p. 25.

Grey, J. (2009). The role of the printing press in the reformation. Accessed from http://janegrey.hubpages.com/hub/The-Role-of-the-Printing-Press-in-the-Reformation

Rubin, J. (2011). Printing and Protestants: Reforming the economics of the Reformation.
Electronic copy available at: http://ssrn.com/abstract=1742523

2 Responses to The printing press and religion: A study in reciprocity