Reading the last two chapters of Bolter’s Writing Space I found myself wondering what does ‘writing the self’ mean?, what would be the implications of this process? Bolter (2011) immediately suggests that
“it seems almost inevitable that literate people would come to regard their writing technologies as both a metaphor for and the principal embodiment of thought…. It may be that cultures invent and refine writing technologies at least in part in order to refashion their definitions of mind and self (p. 189).

In this very intimate relationship of language, self and technology, is technology only a metaphor? From the 1960s when McLuhan first prophesied that the ‘medium is the message’, many theorists like Postman (1992) and Heidegger (1977) have insisted that people needed to become aware of the hidden agenda of technology, its power to create unforeseen effects – this is much more than a metaphorical relationship. The clash of powerful forces characterizes the continuing evolution of social structures and self-image through the technologies of writing, and the current embodiment of the self as a “human-technology symbiont”, in Andy Clark’s (2003) words.

The transformational power of writing on human consciousness (Ong, 1982) gave rise to the reflexive consciousness, the gradual separation of self/other; the knower/known, and the rise of objective scientific knowledge (Eisenstein, 1979). In this way, the paradoxical reflection on the effects of the technologies of writing on self/mind and culture could unfold only through the use of the technologies of writing- so now with digital multimedia (Ong, p.79).

Andy Clark (2003) traces the “cognitive fossil trail” of writing technologies through writing, printing, to digital multimedia, each successively representing “mindware upgrades” as our technologies become ever more complex, multimodal and miniaturized – “cognitive upheavals in which the effective architecture of the human mind is altered and transformed” (p. 4). The self-mind, instantiated in its technologies now dwells in cyberspace – in a world of instantaneous texts, transient digital signals, globally connected to millions of other ‘selves’ where image, sound, icon, electronic writing and collaborative creations all mix and mingle in the creation of multiple meanings. In the face of this, the independent, stable author of the closed text; the Cartesian rational, cognizing self has morphed into “a fragmented and constantly changing postmodern identity” (Bolter, 2011, p. 190). 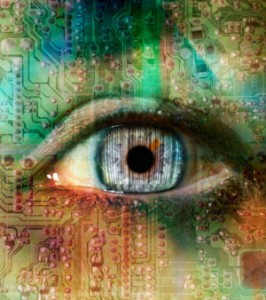 The strangeness in seeing ourselves in our technologies, describing our bodies and minds in their terms is overcome once we realize that this is not a mere metaphor, a comparison between two different things that can help us elucidate essential features of each thing. Bolter goes on to suggest that writing is a metaphor in a strong sense – an ‘identification’ of the two, intimacy of technology and mind (p. 193). The postmodern age understands that the dichotomies of self/other, nature/culture etc. no longer apply. For Clark (2003), our technologies extend and complement our senses, modes of ‘processing’, problem-solving and thinking – “the tools and culture are indeed as much determiners of our nature as products of it” – indeed, our thinking, imagining, feeling self is embodied in these technologies now – mind is not only what’s inside the “fortress of skin and skull” (p. 4,5).

How has digital technology remediated the printed word and so the writing of the self? The very concepts of text and literacy have expanded as fast as the digital technologies have brought audio, video, film, images and icons, collaborative creative spaces, instantaneous searches and connections to everyone’s fingertips. Barthes (1977) describes the implications of these new texts and the millions of readers that have become authors: “We know now that a text is not a line of words releasing a single ‘theological’ meaning (the message of the author-God) but a multi-dimensional space in which a variety of writings, none of them original, blend and clash” (par. 5) – ourselves seem to be everywhere. 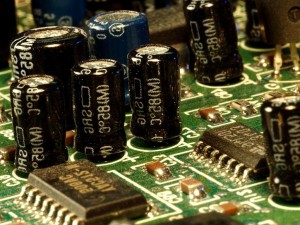 The intimacy of text and technologies is in the organism’s DNA and inscribed in the circuitry itself as Haraway (1991) writes: “The silicon chip is a surface for writing; it is etched in molecular scales disturbed only by atomic noise, … Writing, power, and technology are old partners in Western stories of the origin of civilization, but miniaturization has changed our experience of mechanism. Miniaturization has turned out to be about power; small is not so much beautiful as pre-eminently dangerous” (p.153), as hard to see politically as materially.

Turkle’s (2004) research highlights impacts of digital technologies on people, and the apparent comfort with multiple identities in online virtual worlds; and children interacting with digital devices from digital pets to phones,. As Clark (2004) points out, we are already part of this invasion of the miniature in our phones, ipads, ipods, trackers, implants, nanobots: “minds and selves are spread across biological brain and non-biological circuitry” (p. 3).What kinds of cyborg selves and relationships are being written? For Haraway, it is critical to realize that machine and organism are coded texts “through which we engage in the play of writing and reading the world” (p. 152), that there is a need for creative imagination in order to write the kind of world we want, be the selves we desire, to deflect the “the final imposition of a grid of control on the planet” (p.154). And McLuhan’s (1962) question is still important: “is it not possible to emancipate ourselves from the subliminal operation of our own technologies?” (p. 246). Is the subliminal the circuitry of our bodies or the electronic structures?

1 Response to MEDIA AS METAPHOR?