BCTF New Release, January 8, 2014– Data on BC’s education system released by the government shows our province’s class composition is worse than ever before, said BCTF President Jim Iker. There are over 16,000 classes with four or more children with special needs.

“BC teachers fully support including all students, like those with special needs, in our classrooms, but 12 years of cutbacks have meant those kids are not getting the support they need,” said Iker. “Ever since the BC Liberal government stripped our collective agreement in 2002, learning conditions for all students have deteriorated. We see the results today because more teachers than ever before are dealing with overly complex classrooms without the support of specialist teachers to support students.”

“Class composition is one of the most important aspects in education,” said Iker. “An overly complex class puts immense pressure on the teacher to meet the needs of all students. As teachers, we fully support and embrace diversity in learning styles and needs in our classrooms, but we can only do so much without extra support before students lose out.”

Iker also pointed out that the worsening of class composition year-over-year has coincided with dramatic cuts to learning specialist teachers. For example, since 2002 BC has lost approximately 700 special education teachers and over 300 English Language Learner teachers. Furthermore, BC has the worst student-educator ratio in Canada and funds education $1,000 less per student than the national average.

“BC teachers are among the best in the world, but this government is making it harder for them to do their jobs and harder for students to get the education they deserve,” said Iker. “It’s time for government to step up, correct their past mistakes, and address BC’s worsening class composition.”

BCTF News Release, January 27, 2014– Marking the 12th anniversary of Bill 28, the unconstitutional legislation that stripped teachers’ collective agreements, BCTF President Jim Iker said the result is that a generation of students in BC have been short-changed.

“Children who were in Kindergarten in 2002 when government illegally stripped class-size and class-composition language from our collective agreements are now in Grade 12,” said Iker. “The result is those students, an entire generation of BC kids, have spent their whole K–12 education in larger classes with less one-on-one-time and less support from specialist teachers like counsellors and special education teachers.”

Iker explained that stripping teachers’ working conditions from collective agreements actually enabled the government to underfund education, which has led to the deterioration of students’ learning conditions.

“It is because of the support of parents and the hard work of teachers, who are doing more with less, that BC’s public education system is still as strong as it is,” said Iker. “But more and more teachers are telling me that further cutbacks, or even the status quo, are unsustainable.”

Due to the government’s illegal actions in 2002 and subsequent underfunding, BC has fallen behind the rest of Canada in support for public education.

“After 12 years, with 2002’s Kindergarten class now graduating, it’s time to recognize that government has not lived up to British Columbians’ expectations,” said Iker. “It’s unacceptable that BC is the second worst in Canada on per-student funding and has the worst student-educator ratio. It’s time to end the cuts and begin to bring BC’s education funding up to at least the national average. That will give teachers and students the resources they need to make our public education system even better.” 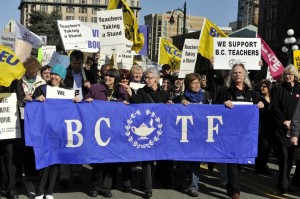