Juniperus communis, also known as the common Juniper, is an evergreen coniferous tree of the Cupressaceae family. It is a relatively small tree that usually grows to 1 metre in height, but some 10 metre trees have been observed. The bark of J. communis is brown and peels off in thin vertical strips. Young leaves tend to be needle-like, while mature leaves are scale-like. The needle-like leaves are lance-shaped, 5-12mm long, and in groups of 3 joined at the base. 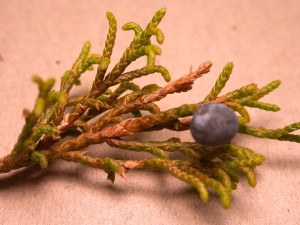 Juniperus communis is dioecious, with female cones on separate plants than male cones. Fruits are berry-like seed cones that are 6-10 mm in diameter and are red at immaturity. When mature, berry-like cones ripen from pale green to deep purple or bluish. Each cone has 2-3 seeds each which are dispersed when birds eat the berry-like cones. The fleshy scales are digested, while the hard seeds are passed through. In contrast to female cones, male cones are small and catkin-like.

J. communis is considered one of the most widespread conifers in the world. It is native to North America and temperate Eurasia. The common juniper can generally be found on hilly to alpine terrain up to an altitude of 3000m. Juniperus communis is also intolerant of shade, and is typically found in open environments.

Seed cones of the common juniper are used in herbal medicine. It is believed that the berry-like cones have urinary tract disinfectant properties that can remedy urinary tract infections. Juniper can also be used for flavouring foods such as meats, stuffings, and sauces. The berry-like cones are too bitter to consume without being dried first before flavouring other food. Some people also use seed cones to flavour certain types of beer and gin.