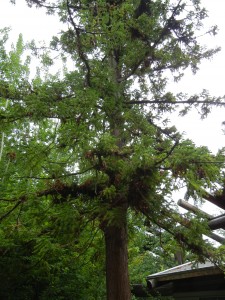 Of the family Cupressaceae, Cunninghamia lanceolata — an evergreen, conifer — is sometimes referred to as the most primitive example of its family, termed a basal clade. Although now it is nearly undisputed that Cunninghamia lanceolata belongs in the family Cupressaceae (or perhaps in a family of its own), originally it was categorized in Taxodiaceae along with nearly a dozen other trees that have also since been renamed. Colloquially, Cunninghamia lanceolata is called the China Fir, although, despite this naming, it is not a fir at all. As the classification Cupressaceae implies, the China Fir is part of the Cypress family, as opposed to fir which are categorized within Pinaceae. The species name, “lanceolata,” was chosen to characterize the lance-like shape of the leaves.

It is native to China, Taiwan, and the Northern regions of Laos and Vietnam, but has more recently been introduced in Europe and North America, brought into cultivation in 1702 by Dr. James Cunningham. A Brit with a taste for botany and employee of the East India Company, Cunningham found the tree in China and is regarded as the first to document it. Despite Cunningham’s discovery, it wasn’t actually brought to England until a century later.

The genus, “Cunninghamia,” was chosen to commemorate Dr. James Cunningham’s documentation of the tree, while simultaneously paying homage to botanist Allen Cunningham, for whom several other plants and at least one highway are named. Despite their common surname, the two Cunninghams appear to have little or no direct relationship. 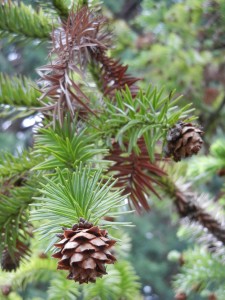 The tree itself can grow to be 50 meters in height, although 15-30 meters is more common. It’s bark, in maturity, is brown and described as “stringy,” as it can be pulled away to reveal reddish inner bark. Leathery, needle-like leaves spiral the branches, and can turn bronze in color during harsh winter seasons. These dead leaves are tenacious and — unless disrupted by weather or a dedicated pruner — can hold onto their parent branch for several years, crowding out new, healthy 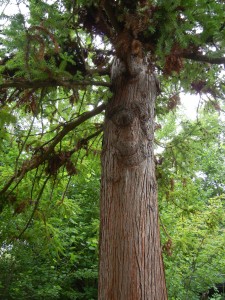 In China, Cunninghamia lanceolata has taken a favored role in reforestation tasks as its durable and hardy wood is highly resistant to insects and rot, while internationally it is a prized ornamental tree. The harvested wood is used for timber in China, and has a fragrant aroma that is appealing for structures like temples, furniture, flooring, and houses. Notably, however, the wood is mostly prized for its use in coffins where, I imagine, the resistance to insects and pleasant smell are most welcome.